July is typically the slowest month in politics with donors and staffers alike heading out of town. But this month was anything but dull. We processed $5.75 million in contributions from 162,935 donations, which helped us top $400 million and six million contributions!

Check out our how July stacked up against the last few years:

That money went to 1,232 candidates and organizations this month, and about 10,181 since we founded ActBlue in 2004. That’s a pretty big increase over 2011, the last off year, which means incumbents and organizations that were around last cycle are getting an earlier and stronger start to their fundraising.

The average donation size was down to just $35.30, compared with $40.12 in 2011 and $115.03 in 2010, meaning more and more small dollar donors are becoming part of the political process. ActBlue’s volume – the total amount donors like you gave – was up 115% from 2011, while the number of committees raising was up 43%. As we mentioned in May, this is a really good sign for Democratic candidates in 2014 and shows the strength of progressive non-profits.

We’re always trying to foster more community between donors and organizations, which is why we’ve been advising campaigns to ask for recurring donations for years. Despite the fact that recurring contributions raise a whole lot more money (you can check out this blog post for details), they also help campaigns build a relationship with donors and provide a steady income. That means smarter budgeting and strategic planning for campaigns and organizations.

We checked out the numbers across ActBlue and found out that 497,411, or 8.54% of all donations this past month were part of a recurring commitment, compared with just 6.66% in 2011. While that’s really good progress, our goal is to see that number grow even more! 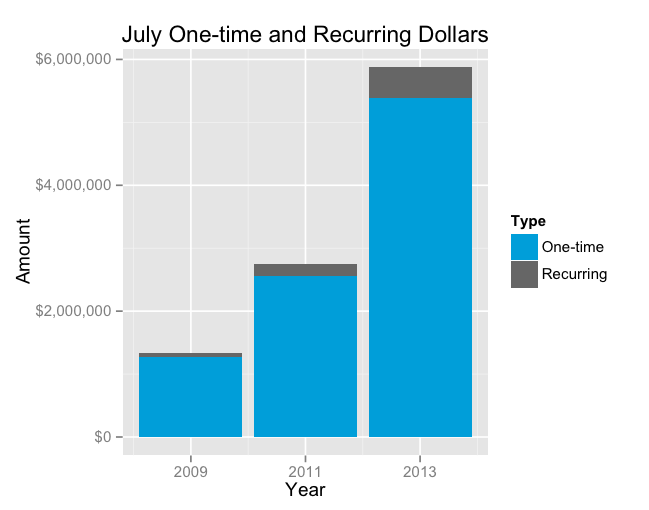 When we hit big milestones here we get pretty excited, and sometimes break out the bubbly for oh about a minute, and then rush to share the news with you. While we put in a lot of work to make the system function, it’s really you – our donors, campaigns, and organizations – who have built ActBlue. That’s why we want to give a shootout to the person who gave the 400 millionth dollar via ActBlue.

Turns out it was a pretty typical ActBlue donor; someone who uses ActBlue to connect with and support the candidates and causes that are meaningful to them through small dollar donations. Her name is Joan and she’s given between $3 and $25 to Democratic committees every couple of months since the beginning of 2012. Her latest donation, $10 to Democracy for America (DFA), was in support of a campaign to expand Social Security. While we’ve been counting down the days until we hit $400 million, we’re equally excited the fact that it came from over 6 million contributions. That’s a lot of democratic participation!

The best part about hitting that $400 million dollar mark is that half a billion dollars for Democratic candidates and progressive causes is now in our sights. The only question is when. We’re taking bets on it at our office, but as donors you’ll be determining the answer with your dollars. I’d say it’ll happen early next October…followed by a resounding victory for Democrats.