Here’s a crazy fact for you: 70.37% of the money raised on ActBlue has come from donors who give to more than one candidate or committee. Yep, you read that right (and we triple checked it).

We’ve long known that one of the greatest strengths of ActBlue is a huge community of grassroots donors that give not just to their local representative, but to organizations and candidates across the country. But that stat really brings it home. And here’s some more:

Over 1.6 million distinct donors have contributed via ActBlue, but 39.33% have donated to more than one Democratic committee, candidate or non-profit, which we call entities for short. In fact, those who have donated to more than one committee or candidate on ActBlue average over six distinct entities overall. That’s why we’ve ended up with a large percentage of money coming from a core group of donors. There are a large number of donors that give to lots of different candidates, committees and non-profit organizations, big and small. These donors are the lifeblood of the left.

Here’s the breakdown of how many entities these donors gave to. 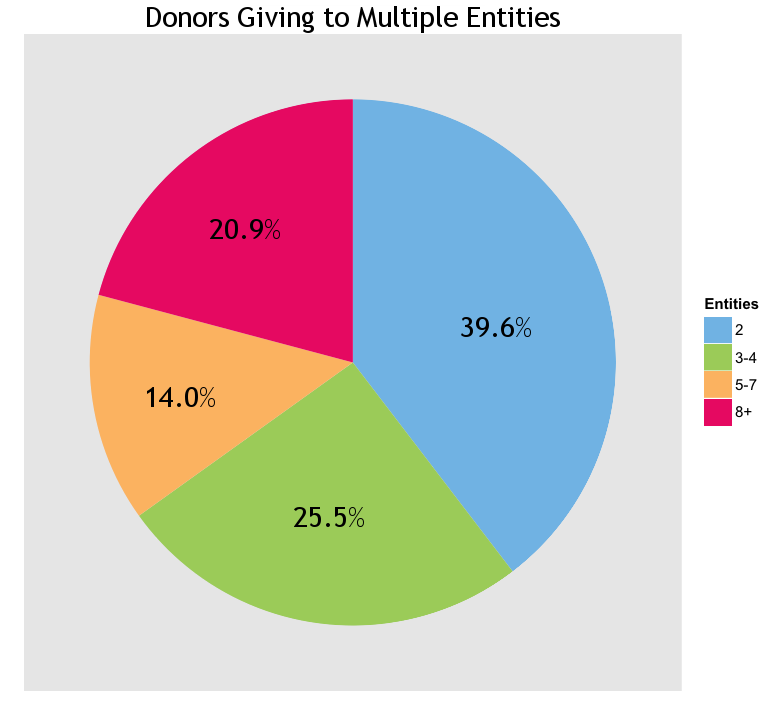 (Yep, you’re seeing a bit of a difference between mean and median in terms of number of entities these multiple entity donors are giving to.)

ActBlue donors tend not to be transient, but rather long-term community members who come together on ActBlue to connect with organizations and causes which they support. And 600,000 of them have saved their credit card information with us to become ActBlue Express donors.

ActBlue donors who give to multiple entities don’t just contribute more money, they also contribute at the most important times. The percentage of dollars given by supporters who donate to multiple candidates/organizations/committees increases in election years, meaning that these ActBlue users turn out to support candidates and committees with even greater commitment when it really counts.

Now, just because these dedicated ActBlue donors give more money doesn’t mean that they are just max-out donors who crowd out the grassroots. The most common donation amount (median) among multiple-entity donors is exactly the same as single-entity donors: $25. This pattern of donating perfectly reflects our ethos here at ActBlue — a community of grassroots donors who will be there to chip in to support a recall election in Wisconsin and support a campaign to expand Social Security a year later.

These folks are positive proof that fundraising is not a zero-sum game, and the biggest reason why the left keeps outpacing the Republicans online.

But these donors didn’t manifest overnight. They’re part of this community because of the commitment thousands of campaigns and organizations have made to reaching out to donors via email and social media. At ActBlue, we’ve made it easier for donors to give by streamlining and centralizing the contribution process with projects like ActBlue Express and mobile forms. And nothing would make us happier than seeing these numbers grow every single year.