November is the Big Show. At least it is when it’s a major election year. Off years are a trickier beast all together. For the die hards out there, it’s an exciting year filled with local election drama and good old fashioned campaigning (at ActBlue, we were engrossed in the ever-confusing and thrilling Cambridge City Council elections). For many in the media, November is a litmus test that determines where our country’s collective head is at.

The general consensus was that we’re split right down the middle–a Democrat (Terry McAuliffe) and a Republican (Chris Christie) won the two high profile gubernatorial elections–and that we’ve got a tough, but winnable, fight ahead of us in 2014. November is also important because a strong month for a campaign or organization now means more structure, funds, staff, and momentum in 2014. If we extend the litmus test to our own data (and boy do we have a lot of it), we’d say Democrats are in fighting shape, and we’ve got the numbers to prove it.

Over the past year, we’ve been preaching the importance of starting your fundraising efforts early to the campaigns and organizations who use our tools, and they’ve been listening. The same could be said for donors. Our community of supporters made 194,431 contributions in November. That’s more than triple the number who donated in November 2011.

Having a core group of dedicated donors and advocates is important, because it means more boots on the ground and more supporters who can activate their friends and their networks. The barrier to entry is low – our average donation is just $38.59 – but the results are big.

Other measures that have us convinced Democrats are on the right track? We set up 165 new campaigns and organizations in November alone. Sitewide, 858 new contribution forms were created, a whopping 4,655 contribution forms were updated, and more groups raised funds than in November 2012, a general election year (1,486 vs. 1,449). That’s a whole lot of fundraising going on! It also points to there being more savvy and digitally literate campaigns from top to bottom. In November 2011 for example, we saw just 136 forms updated. That’s an enormous spike in activity, and an indicator of a strong 2014 for Democrats.

Another great indicator of campaign readiness is the percentage of recurring contributions coming in. Recurring contributions are a great way for campaigns to have a steady and reliable source of funds, and they’re an important fundraising tool when you’re still a year out from your election. This month 18.8% of donations sitewide were recurring contributions, compared with 16.4% in November 2011. We’re happy that number has scaled and even grown as the number of campaigns and organizations using us–1,486 this month vs. 1,116 in 2011–has increased. One of our goals over the next year is to continue increasing that number. It’s one of the best ways to facilitate relationships between campaigns and supporters.

As the organization that makes these connections, it’s our job to remove any friction in the donation process in addition to ensuring campaigns and organizations are doing fundraising the right way. Mobile responsive contribution forms and Express Lane, our one-click donation feature, have gone a long way towards making the process easier for donors. The proof? Our mobile numbers are way up–19.3% overall and 22.9% for Express donations. That’s a huge change from last year. Check out the stats below. Can you tell which month we launched mobile responsive? Hint: it was a big deal. 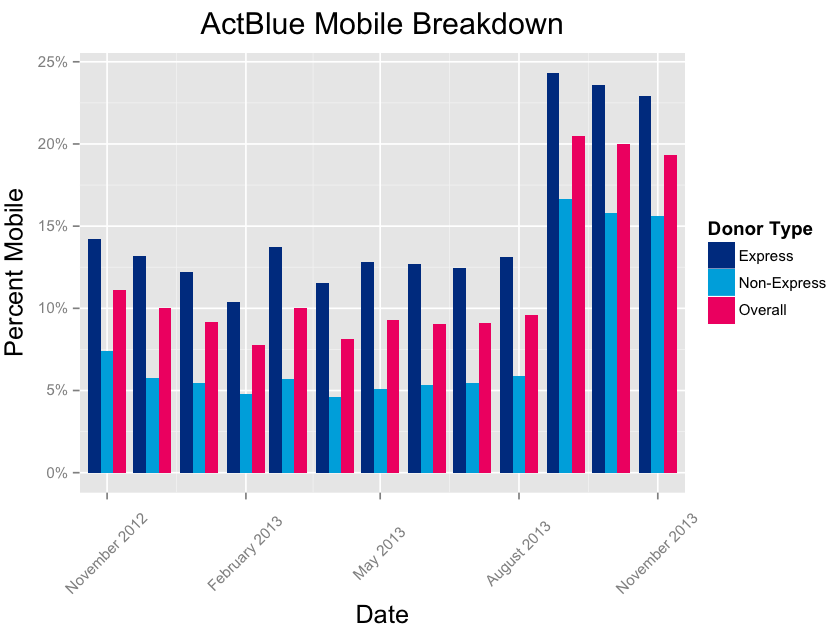 December will likely bring a bigger month with end of quarter (and end of year!) fundraising pushes and donors in the giving mood. The hard work campaigns and organizations put in during the coming month will pay off big time come 2014. For us at ActBlue, December will be the calm before the election year storm–time we’re planning on using to sharpen our tools and roll out a few big-deal new ones. Don’t worry though, you’ll be the first to hear about them.