The supercharged final days brought our December total up to $11.2 million, our biggest month of the year. The quarter and year totals came in at $28.7 million and $89.5 million, respectively. That’s more than double our 2011 off-year total of $41 million. So, in other words, 2013 was big, and the work we did this past year is going to help pave the way for victory in 2014.

Here are a few other fun facts about the year:

We broke down the numbers for December, Q4, and all of 2013, for this triple-the-data, triple-the-fun end of year recap, with the big moments, trends, and takeaways from the year in fundraising. Dig in below.

This year’s New Year’s Eve, the Q4 deadline, outpaced the last few by HUGE margins. In 2011, just a year out from a presidential election, we brought in $511,553.47, compared with the $2 million and change in 2013, a nearly 300% increase. Expect to see more monster fundraising deadlines next year. If you’re part of a campaign or organization that is fundraising, you might want to make sure you’ve got more than one email at the ready if you want to jump in the mix. Don’t get swallowed up by the inbox influx. And yeah, we can all see where this trend is heading. 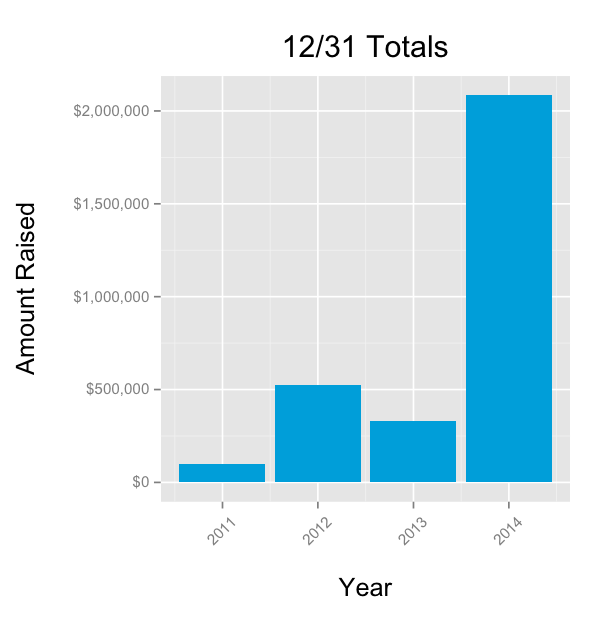 We raised $15.7 million more in Q4 ‘13 than in Q4 ‘11, for a total of 2,194 different candidates, committees, and organizations. That’s a 30% increase in the number of committees from Q4 ‘11. Conversely, the average donation fell substantially, from $70.01 in 2011 to $42.22 in 2013, meaning that an army of small-dollar donors powered this huge jump. Early money is worth more to campaigns and organizations because it means they can build infrastructure, hire staff, and recruit volunteers. The successful Q4 will go a long way towards ensuring these groups are prepared for the upcoming election, and shows the GOP that Democrats are gearing up for a serious challenge next November.

This year we also launched Express Lane, our one-click donation system. We’ve been building up our pool of users for years, and now have a total of 714,519 Express users, shared across all candidates and committees. That makes it a whole lot easier for donors to give to all of their favorite candidates, and for candidates and organizations to increase conversion rates.

It had been pretty clear to us even before 2013 that mobile is the future of online donations, and we rolled out brand new mobile-responsive forms this year that made it easier than ever for donors to give on the go. Overall, the percentage of donations via mobile in 2013 was 14%, double the previous year’s mobile rate. Consider the fact that we introduced our mobile responsive forms late in the year—mid-September— and the results are even more incredible. With such a huge upward trend, we’re predicting that 2014 will be the Year of Mobile. 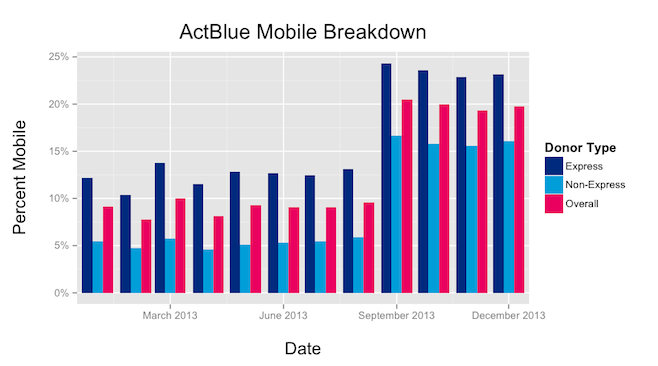 We had a hunch that the mobile numbers might have jumped during the holidays, when donors were away from their desks. We were right. Mobile contributions constituted 24% of all contributions on Christmas Eve and Christmas Day, the highest of the entire month. That number also stayed above 20% from 12/20 on. The beginning of the month, on the other hand, saw rates around 13%-17%. The takeaway? If you’re sending on a weekend, a holiday break, or a popular vacation time in the summer, be extra sure your content is mobile friendly. Then again, you should already be doing that.

So, 2013 was busy to put it lightly. But it will pale in comparison to the volume we’re going to see next year ahead of the midterm elections. We spent 2013 beefing up our tools so that we’ll be ready for a crazy busy 2014.