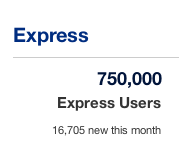 Three quarters of a million people have signed up for ActBlue Express accounts!

That’s 750,000 people who have saved their payment information with us and can give with just one click on every ActBlue form. It doesn’t matter if it’s $5 for a city council race in Cottage Grove, MN or a max-out donation for Alison Lundergan Grimes, it works exactly the same.

We’ve been experiencing a crazy growth spurt in the Express user base, which is up from 600,000 in August. Below we chart the number of Express users we’ve added since the launch of the program. As you can tell, the number spikes during election years. One million here, we come! 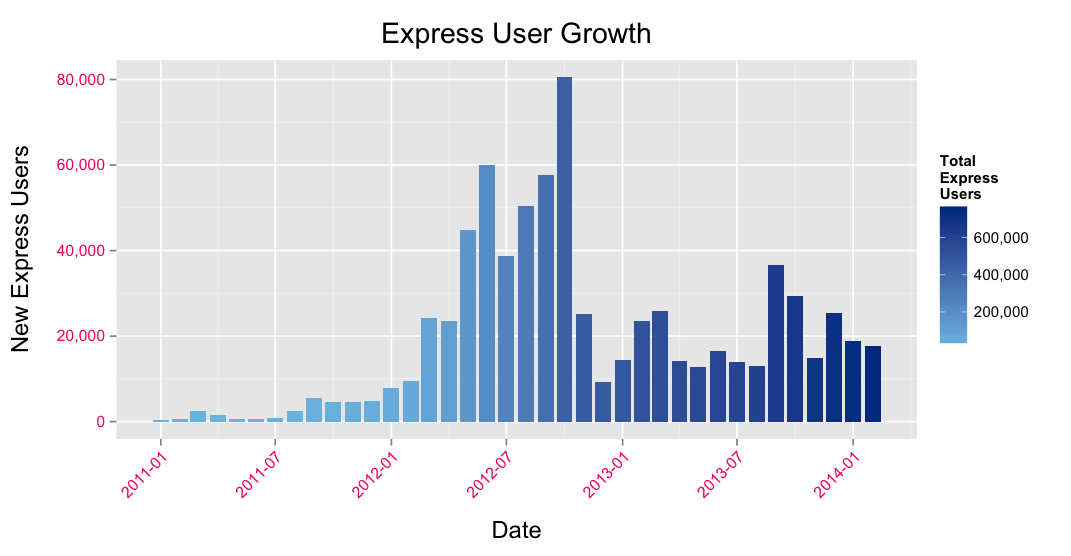 The Express program is designed to help the Democratic party as a whole. Donors love it because it saves them time and gives them a secure and trackable way to give. And candidates and committees benefit from higher conversion rates.

Making a donation is a streamlined experience for Express users. That equals higher conversion rates, especially on mobile. The mobile part of the equation is going to be key during this election year.

Making the giving experience as easy as possible for users is just as important as increasing conversion rates (although the two are obviously intertwined). Express users are some of our most active users. They give to an average of 2.57 entities campaigns or organizations a year and since 2013, 3.5% of donations from Express users were recurring, compared with 2.2% of donations from non-Express users. These are people who are committed to supporting the candidates and issues that mean the most to them, so it’s important that we’re paying attention to their giving patterns, and listening to them when they reach out to us. Not just for our own success, but for the success of the party.

Express Lane, our one-click payment system, has been a game-changer. We’ve been rolling out Express Lane to a number states for statewide and legislative races the past few months, and we’ve seen campaigns across the country increase their conversion rates (and raise up to 200% more money).

The Express user pool will grow dramatically as we get closer to the election, so we’ll be more focused than ever on finding new ways to increase conversion rates and make the donation process easier for these users.

Have you tried out Express Lane for your federal campaign? Have you used your Express account to keep track of your political donations? Let us know in the comments! We’d love to hear from you.