We’ll forgive you for not noticing that anything big was happening (after all, your contribution forms loaded faster than ever), but this relatively calm February was the 10th biggest month in ActBlue history. What’s even bigger is the fact that this was the only month in the top 10 that wasn’t at the end of a quarter or during the fall of an election season. If a random February can make ActBlue history, we can’t wait to see what’s in store for 2014.

Our last day of the month was our biggest as usual. We helped bring in $1.38 million dollars on February 28th. That was our second biggest day between any election day and June 30th of the next year. And if February’s $10.2 million fundraising total (double our February ‘12 total of $5 million!) is any indication, it will be a very busy March indeed.

Check out the numbers below:

We had a quarter of a million contributions in February, more than double the number of contributions we saw in February 2012. Our average contribution size dropped from $46.02 in February ‘12 to $39.56 in February ‘14. That means that we’re scaling and even increasing participation from small-dollar donors as our candidates and organizations raise more money.

February’s fundraising was boosted by a few factors. The competitive special election race in Florida’s 13th District (Go Alex Sink!) and the rise of the Koch brothers as a foil to grassroots funded campaigns made fundraising appeals more urgent. But the biggest driver of growth was the sheer number of campaigns and organizations raising money early. We sent checks to 1,684 different candidates, committees, and organizations, which is up 26% from February ‘12. We also had 242 new committees sign up to fundraise on our site last month, which only means bigger fundraising totals and more donors to come.

On February 28th, we came in to the office and saw we’d raised over 200k already, which mostly came from the monthly contributions scheduled for the end of the month. 7.9% of all donations sitewide were recurring donations, compared with 5.91% in February ‘13. The number of recurring donors has grown substantially over the years, and we couldn’t be happier because recurring money helps campaigns and organizations make realistic plans for the future. Recurring donors also give more money over time than one-time donors, which means that recurring donors can be incredibly important to a group’s success.

It wouldn’t be a monthly numbers blog post if we didn’t remind you all just how important mobile donations have become. They accounted for 19.2% of all traffic sitewide for the month and 22.6% of all traffic on the last day of the month. Additionally, 23% of all Express contributions were made via mobile. 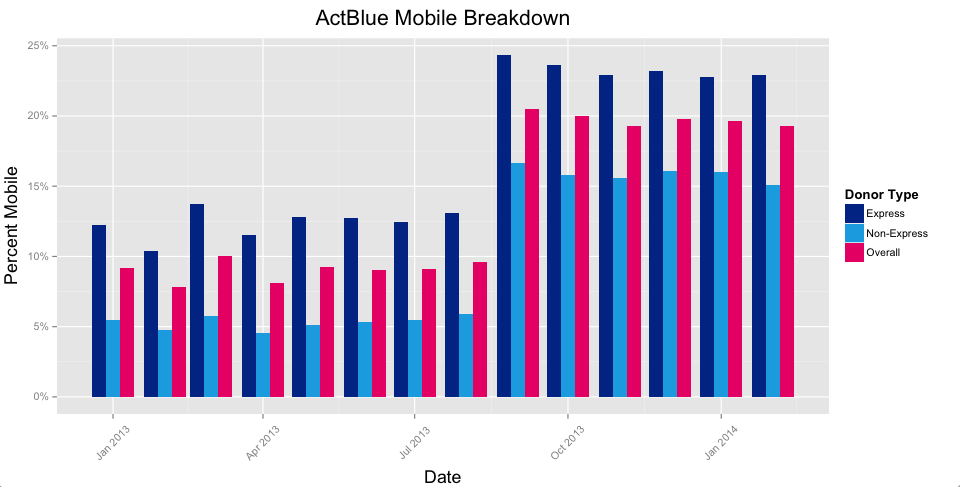 If you missed our recent Express blog post, we’ll catch you up on why Express users are so important. We’ve got over three quarters of a million Express users who give to an average of 2.57 entities. In addition, 40% of all unique donors on ActBlue (since we started back in 2004!) have signed up for Express accounts. If someone has made a donation via ActBlue, there’s a good chance they’ve saved their payment information with us. That translates to a streamlined experience for donors and more money for campaigns and organizations.

The fact that we’ve been doubling our 2012 totals this year (and our internal goals!) indicates that 2014 will be one heck of an election year. And when you think about the fact that we brought in $35 million in October ‘12, it becomes clear just how big 2014 will be. Since then, online fundraising has grown rapidly, and we’re already working on scaling our tools to handle the huge growth spurt we’re seeing. Will we see a $100 million month? It’s not out of the question. But no matter what our volume numbers are in October ‘14, we’ll be ready.