May ’14: EOQ prep and a blast from the (Wisconsin recall) past

Last month we focused on how the culture of fundraising deadlines, even in non-EOQ months, has led to crazy-busy closes to each month. May was no exception. 29% of the $13.9 million fundraising total was raised during just the last 4 days of the month.

We’ve gotten used to doubling our 2012 fundraising numbers each month, and we were surprised when we only came in about $4 million ahead of our May ‘12 total of $10 million. And yes, we know it sounds crazy to be saying “only $4 million.” Even weirder: we only raised a million more in June ‘12 than in May ‘12.

We jumped in the way-back machine to investigate and realized that two years ago our May fundraising numbers were driven up because of the Wisconsin recall elections. This year, we had a solid but not stand-out month, which is what we’d expect when the country isn’t focused on one very unusual recall election. Campaigns are planning huge fundraising pushes for June, and May is just the (relative) calm before the end of quarter storm.

You can dig into the rest of the numbers here:

It’s been a month of shuffling, with new campaigns joining and others dropping off due to primaries. We had 215 new campaigns and organizations sign up in May, and a total of 2,099 groups actively fundraising, compared with 2,001 last month.

Mobile donations continued to be hugely important and accounted for a full 23% of donations sitewide this month, and 25% of all Express contributions.

Our Express user base grew to 871k. The growth was partially driven by more and more campaigns switching over to ActBlue and using Express Lane. They’re getting to see just how big of a boost one-click payments provide. 14% of all contributions in May were made with Express Lane. Check out the growth here: 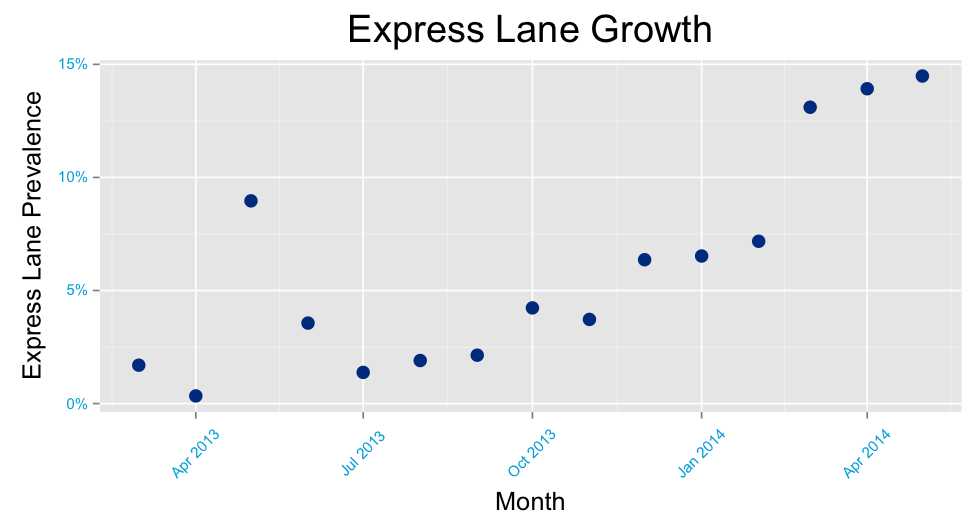 That’s a whole lot of clicks, and we only expect the numbers to rise as we move into June, which is sure to be a monster month for fundraising.