The biggest day in ActBlue history…by over half a million dollars!

The last day of June started off a bit slow compared to other monster end of quarter days. The question—is $3 million possible?—loomed in the office.

But then in a 3 hour period, from 1 to 4 PM EDT, we handled almost a quarter (23.5%) of the day’s total volume of $3.7 million(!!). Campaigns were waiting on the two major Supreme Court decisions to be announced before sending emails. The day’s narrative switched from a typical, EoQ rush to the deadline to a more politicized one.

That $3.7 million came from over 85K contributions. On a single, gigantic last day of Q2 2014, we broke our own records for total dollar amount and number of contributions! 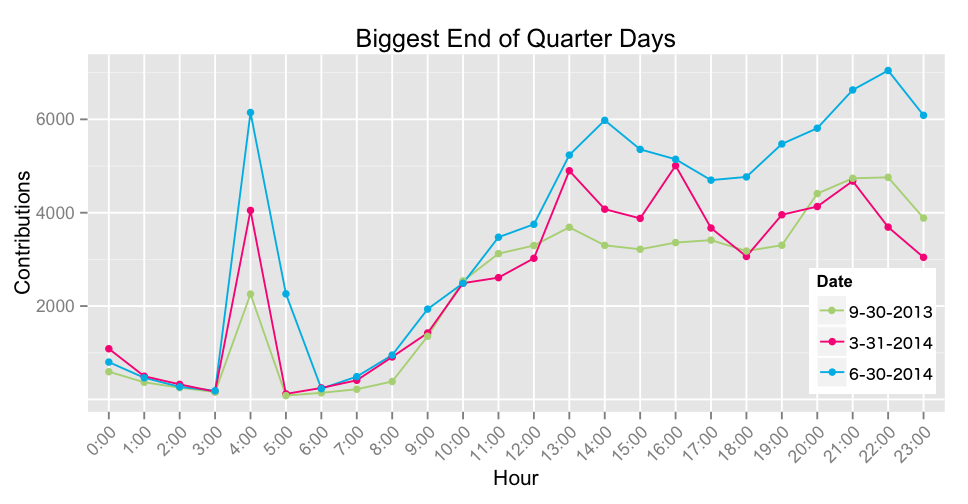 And those aren’t the only record shattering numbers from yesterday:

We’re constantly upgrading our powerful tools to handle a ton of traffic, which makes days like these possible. At one point, we handled 655 contributions in 5 minutes! Our technical team works incredibly hard so we can offer Democrats the most reliable and secure software available. We’re ready for the surge of donations this fall.

You’ll notice in the graph above that there’s a massive spike in contributions at 4AM for each day. As you’d expect, it’s not because lots of people check their emails at that time. We get recurring contributions processed during the morning’s quiet hours, so campaigns wake up to bigger balances, ready to start the day. Overall, the number of recurring contributions has steadily increased as organizations are realizing the value of a steady stream of money.

June’s final tally? $20,513,475, our third biggest month ever. 541,427 contributions were made to 2,153 candidates, committees, and organizations, with an average donation of $37.89. Impressively, mobile donations accounted for more than a quarter (25.2%) of contributions this month.

Compared to June 2012, the total number of contributions more than doubled, while the volume increased by more than 40%. The difference there is the decrease in the average donation size ($43.25 in 2012 to $37.89 in 2014). Chalk that up to growth in small dollar donations, which means campaigns and organizations are expanding their base. Nothing like an increase in grassroots support for Democrats!

Just a quick glance at a graph of this month’s contributions day by day shows how productive the final days of a quarter can be. Five out of the last seven days of June were over $1 million. Even the significant fundraising bump from Cantor’s defeat on June 10 could not compare to the high-stakes pressure of an EoQ week. 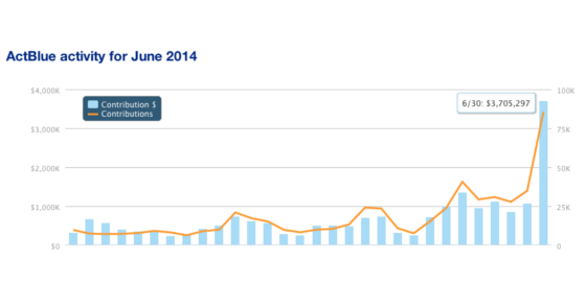 This was an important quarter for candidates and organizations gearing up for November, and the ActBlue donor community came out in full force: they gave over 1.1M contributions, totaling $46M, to 2,810 different candidates, committees, and organizations. Despite the busiest months of the election cycle lying ahead of us, we’ve already raised more money than any previous cycle! There’s still 4 months and 2 days left until the November elections, and all signs are pointing to a massive final push.

Part of what’s driving the push is that more and more campaigns and organizations are using ActBlue’s Express Lane program, our one-click donation system. They’re already seeing results: Express users were responsible for 59.9% of June’s contributions.

We’ve now got over 933K Express users. And thanks to the madness of EoQ, there were 45K new sign ups over this past week alone.

Looking at our numbers from June and 2014’s second quarter, it’s clear that this election year is going to get even busier. What dog days of summer? This cycle doesn’t look like it’ll slow down.