July ’14: our mission in action

Democrats are fired up.

Clearly, election years no longer have any dog days of summer. That’s especially true when Republicans’ antics include threatening to sue President Obama, actually suing him, and refusing to rule out impeachment.

In the wake of the GOP’s outrageous actions, major Democratic committees and organizations sent out hundreds of emails. And it worked. They raised millions of dollars from hundreds of thousands grassroots supporters.

July’s average contribution size was just $28.52. That’s the lowest we’ve seen in the history of ActBlue.

And we couldn’t be more thrilled! A month like this exemplifies ActBlue’s mission: to democratize power by putting fundraising tools in the hands of grassroots donors across the USA. It’s evident that small-dollar donations are increasingly powering the left’s campaigns and organizations.

This month’s total volume was more than twice July ‘12’s total of $8,342,124. This year’s trend of doubling our fundraising numbers from 2012 is impressive in its own right, but it’s even more exciting to see the number of contributions increase by 3.5 times, while the average donation size continues to decrease. And we’re working with even more candidates, organizations, and committees: 2,153 this month, compared with 1,866 in July ‘12.

Like we mentioned in last month’s recap, we process all of the recurring contributions early in the morning when most people are asleep. We do this for two reasons: campaigns and organizations wake up to a surplus of cash and and our system is ready to handle the rest of the day’s contributions.

Despite the incredible volume we saw in the final week of July (one $2M day, five days over $1M, and one day over $900K), it was smooth sailing for the ActBlue technical team. This is a true testament to the work that our tech team does on a daily basis to prepare for surges in volume like these.

Here’s a look at the month’s daily volume of money and number of contributions: 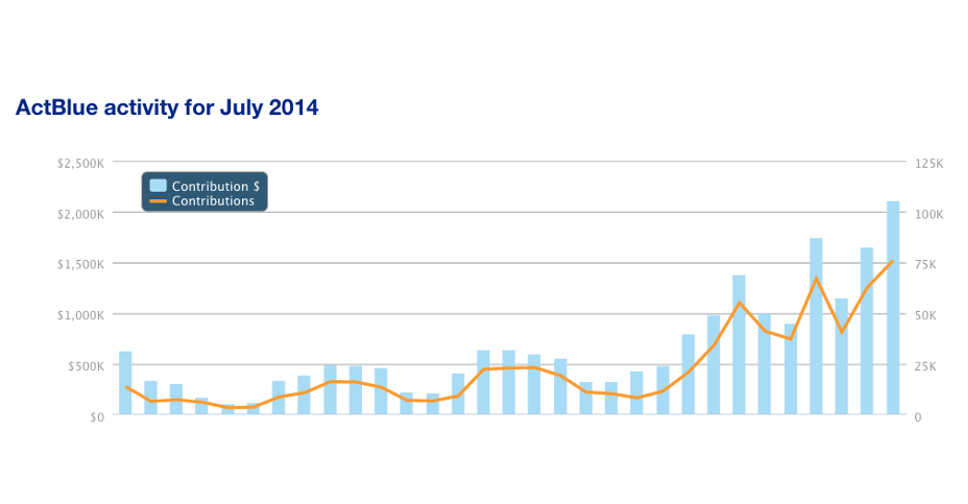 In case you missed our earlier blog post, the number of Express users climbed to more than one million! What makes this community a game changer for the left? Express users have securely saved their payment information with us, so they can donate to a Democratic campaign or organization in an instant.

In July alone, Express users contributed $10,465,812 (or 52.8% of the month’s total volume of money) and accounted for 61.5% of the total number of contributions. And 16.7% of all newly made contributions were made via Express Lane, our one-click contribution system.

Campaigns and organizations have set a blistering pace for emails sent and money raised in order to win this fall. And at this point in time, it’s safe to say that this cycle’s not slowing down anytime soon. There’s too much at stake not to.