Labor Day has historically marked the start of campaign season. Somebody forgot to tell this cycle’s campaigns: we’ve already passed the $200M mark!

In August 2014 we handled $22,982,206 from 690,488 contributions, placing it in our top-3 with October 2012 and July 2014 for most contributions in a single month. Both this month’s incredible number of contributions and the low average donation size (just $32.88) demonstrate how hard campaigns and organizations are working to mobilize a grassroots movement.

August 2014 was more than $10M larger than August 2012, while the number of contributions has increased by 122%. That’s causing the average contribution size to decrease by 20%. And that means more small-dollar donors are supporting the causes and candidates they care about.

We’ve seen a dramatic increase in the percentage of recurring contributions compared to previous cycles. 15.4% of August 2014’s total volume of money — a sum of $3,523,237 — came from sustaining donations. The chart below shows the growth of recurring volume in the 2010, 2012, and 2014 election cycles: 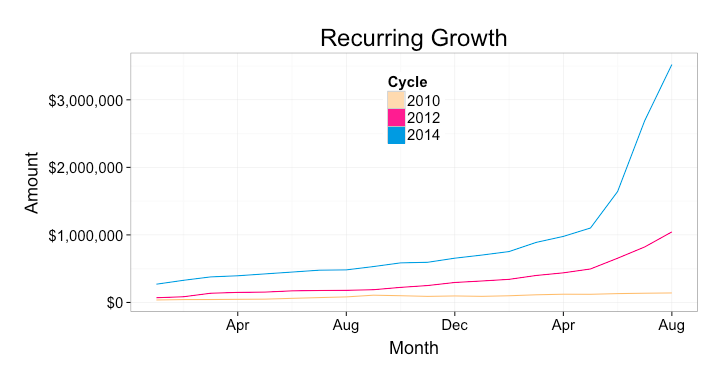 So far this election cycle, we’ve handled $17.8M of recurring contributions. That’s an increase of 170% from the same point in the 2012 cycle and more than ten times where at the end of August 2010.

Building a base of recurring donors can have a huge impact on the sustainability of a campaign or organization. A predictive, steady stream of money helps them better manage their finances. And for organizations, which will continue their important work long after November, a pool of recurring donations can help with the post-election donor-fatigue. Recurring donations help donors stay engaged by letting them make regular, small dollar investments in the causes they care about.

To cap off another massive month, we passed the 10 million contributions mark on August 30th! We were too preoccupied with a crazy amount of donations over the holiday weekend to properly celebrate. Over the last 3 days of the month, we handled 22.7% of August’s total volume of money. For those wondering, we did manage to take a screenshot of our internal metrics page and share it with the team. 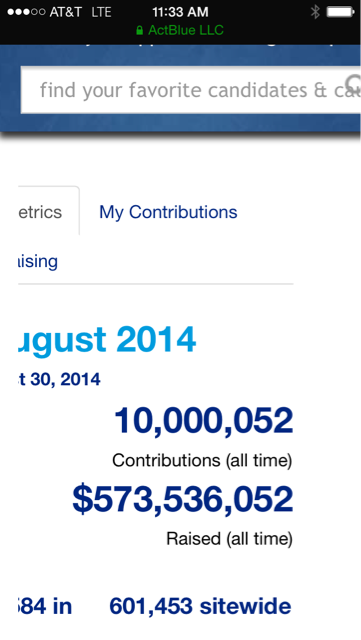 It wouldn’t be an ActBlue monthly recap if we didn’t point out some impressive Express and mobile stats. Over 54k Express users signed up this past month to join our million-plus individuals strong community of supporters who can donate in an instant. Express users made 63.7% of all contributions in August 2014, which totaled more than $12M. That’s more than half of this month’s total volume, and a testament to how many campaigns are working with the Express tools.

Express users have saved their payment information with us, which increases mobile conversions. They give with mobile devices at a higher rate than non-Express users: 29.6% to 23.9%. Mobile donations continue to increase sitewide. This month saw 26.2% of all contributions made with a mobile device.

Campaigns and organizations are fundraising at a blistering pace. In the past two months, we’ve handled more than 1.3M contributions. And we’re prepared to handle the massive load of small-dollar contributions that are predicted to come between now and November. It’s going to be a crazy ride!