With just one day until the election, we squeezed in some time to reflect on our monster October. There was no real “October surprise,” just a whole lot of grassroots fundraising, and a whole lot of work from campaigns and organizations across the country.

ActBlue handled a total of $56 million from 1.2 million contributions. Donations averaged $45.59 and went to 2,514 different campaigns, committees, and organizations. It was our biggest month by far, both in terms of dollars and donations. The runner up? Last month (September 2014), when we raised $38 million from 890,915 donations.

If you’re curious, the biggest hour of the month was on 10/31 at 3 PM EST ($222,965) and the biggest day was 10/15, the pre-general reporting deadline ($3.3 million). That’s a deviation from our typical month; fundraising totals usually build steadily, and the last day of the month is almost always the biggest. With Election Day looming, October was crazy from beginning to end. And that meant a massive, steady stream of contributions to handle, customer service emails to return, and campaigns to assist.

Check out how October ‘14 stacks up to past years:

Express users accounted for a huge chunk of that money — $33 million to be exact or 59%. With tens of thousands of new donors tuning into politics in October, our Express user community also grew significantly. We added 73,679 Express users last month, bringing the total up to 1,206,416!

Mobile donations continue to be a huge factor. 24.9% of contributions sitewide were made via a mobile device.

One of our most popular election season features is weekly recurring — and for good reason. It accounted for 10.7% of total volume in October and 315,281 contributions. More importantly, that money, combined with built-up monthly recurring (7.8% of total volume), provided a steady source of income for campaigns, so they could plan ad buys and GOTV efforts effectively.

Check out how this month stacked up against September, when we debuted weekly recurring and saw fundraising rising to a crescendo, rather than steadily marching towards Election Day. 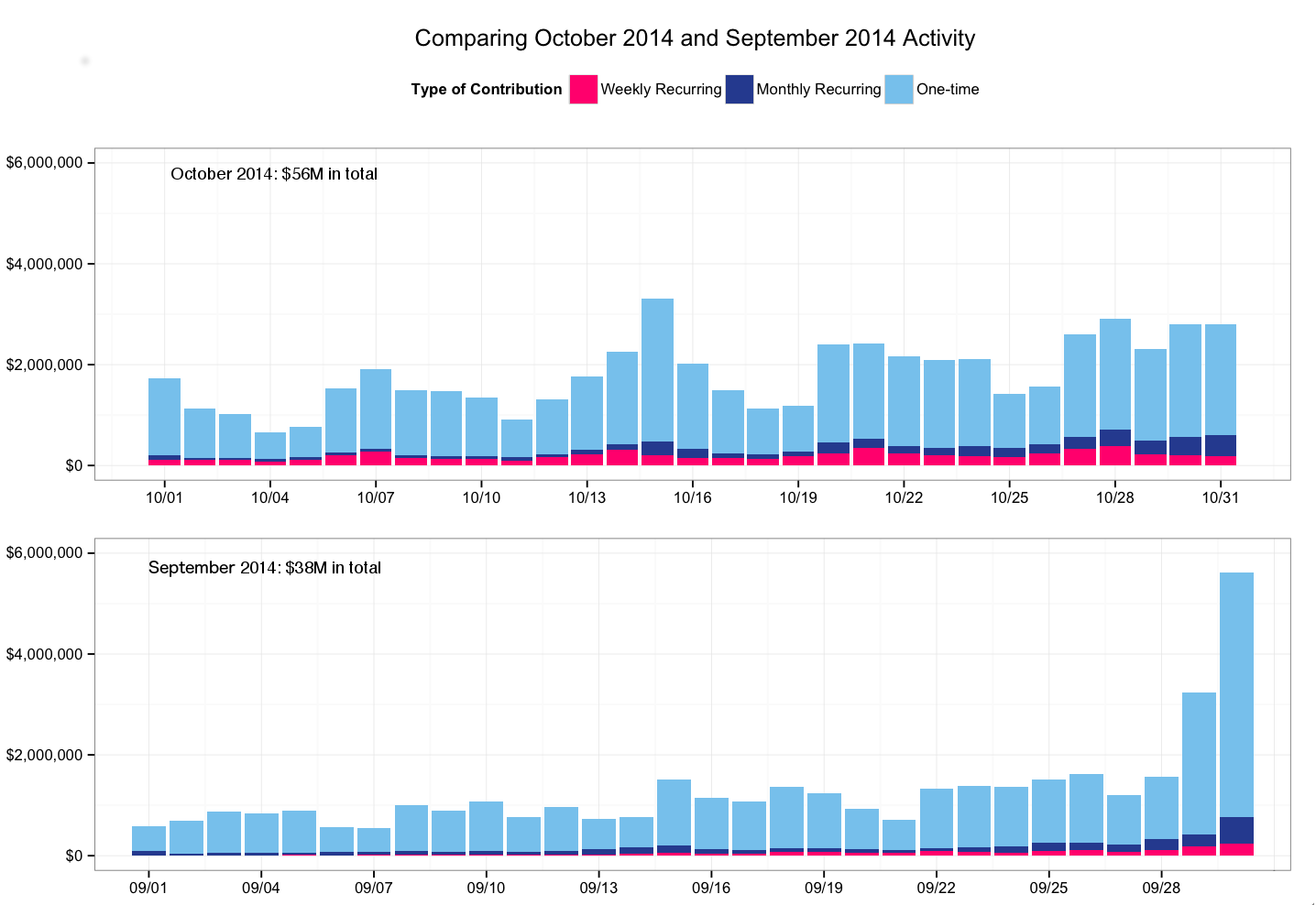 The narrative of the 2014 election has been that voters aren’t paying attention. But these numbers prove one thing: small-dollar donors are engaged and getting involved at a higher rate than ever before. And amongst all the Koch brother headlines, that’s an encouraging sign.