November’s always a weird month around here. We have a handful of our biggest days of the year leading up to Election Day, and then there is a sharp drop off. We affectionately refer to this transition as Sad Graph™:

This pattern is to be expected: campaigns’ fundraising pushes end on Election Day. We raised $13 million for 1,634 candidates and organizations from 490,327 contributions (51.89% of that money came in during the first four days). That’s a big drop off from the previous months, but in line with past Novembers. The average donation size was just $27.22, and more than a quarter of contributions (27.8%) were made via a mobile device.

You can check out how those numbers stack up against past years below. Keep in mind that November top line figures can vary a little more year-to-year than other months, depending on when Election Day falls, and whether there are a lot of recounts and runoffs.

Despite the decline in contributions and the close of the election cycle, we continued to bring in a ton of new Express users. 17,171 people signed up for Express accounts, bringing our total up to 1,223,587. Those are our power users, and they accounted for 66% of all contributions in November.

Growing that Express user base and keeping them engaged is going to be a main focus for us going forward, because we know these users are going to play a crucial role in the 2016 elections.

Another main focus for the next election cycle will be recurring contributions. We’ve been championing recurring programs in this space for a while, and it’s paying off. Recurring contributions accounted for a full 39% of all dollars in November and caused that spike at the end of the month. That recurring money is a huge boon to campaigns and organizations, who were slammed during November. And it’ll keep paying off during the winter, when fundraising is tougher for most organizations. 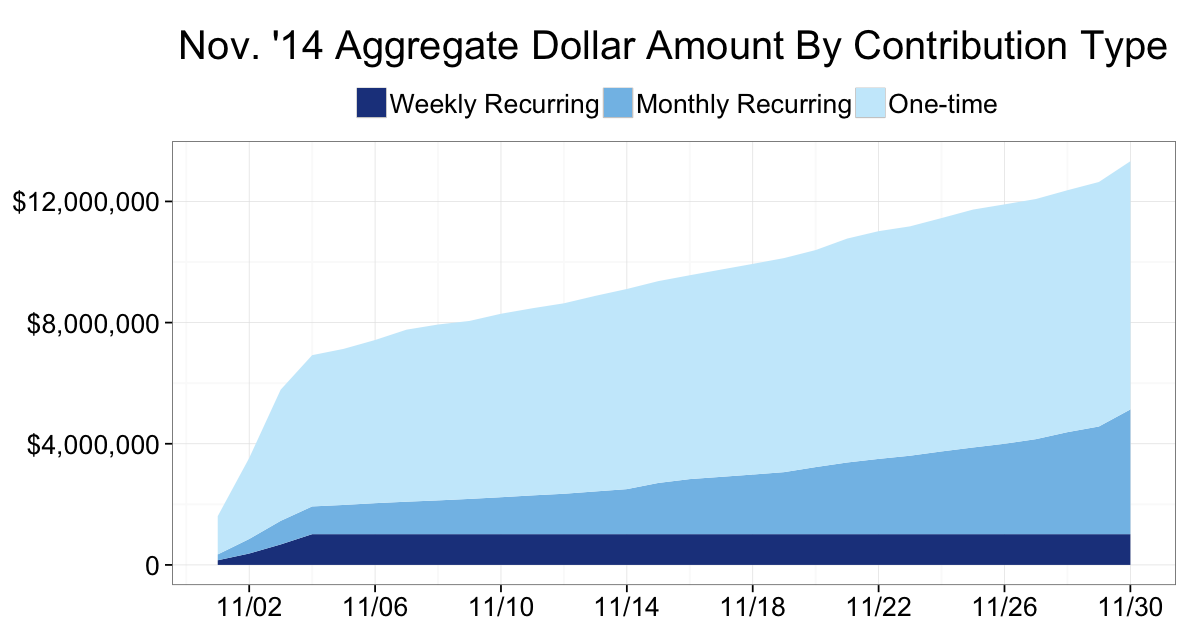 Slower months don’t translate to a quieter time over at ActBlue. Now that the election has come and gone, we’re looking ahead to 2016 and planning out the tools and upgrades we’ll need to be ready. And we’ll be at Rootscamp in a few weeks if you want to talk about the future with us!