Not only was last Tuesday the fourth largest quarter in ActBlue’s history, the last day of the quarter was the second biggest day in ActBlue history, clocking in at $4.6 million and 106k contributions!!

And Democrats and progressives weren’t the only ones taking notice that day — we tweeted that we were already at 42k contributions before noon (thanks mostly to all the recurring donations that ran that morning!), and the NRSC seized on it and sent an email to their list claiming we were “flaunting it.”

Bragging about the power of small-dollar donors using ActBlue? Absolutely. Heck, we even sent out an email about it.

Here’s a breakdown of topline numbers for Q2 2015. Keep in mind, the best comparison here will be to 2013, since it’s our most recent off-year…it’s easy to forget we don’t have an election coming up when you see numbers like these.

Yep, that’s right. We still raised more this quarter than we did in Q2 last year, a mid-term election year.

We also hit a major milestone this quarter — we’ve raised more than $750M online over the last 11 years. At this pace, we’re well on our way to one. billion. dollars.

But it’s not just that big number that’s growing so quickly. In the last quarter alone we saw a jump from 1,731 committees raising money to 1,976 committees.

With Republican presidential candidates flooding the airwaves with campaign announcements and Democrats at all levels jumping into races, it became clear during this past quarter that the 2016 cycle is well underway.

People are paying attention to politics again and we’re seeing an increase in participation across the board. With $47.3 million raised this quarter, the growth over past cycles is astounding. That’s the power of small-dollar donors in action.

Compared to Q2 2013, when the average contribution size was $41.05, Q2 2015 saw an average size of $36.90. We love to see that, but we were also excited to see more than double the number of contributions. In Q2 2013 we processed 529,607 contributions, but this past quarter we handled an amazing 1,281,922 contributions. This just goes to show that there’s more power in (small-dollar) numbers. It’s more apparent than ever that the grassroots movement is in full swing!

We had our biggest hour ever thanks to recurring donations. It was June 30th during the 4AM hour, and we raised $355,410 from 20,300 contributions. We run all of our recurring contributions at 4AM, so the website doesn’t have to handle all of that traffic during our busiest hours. 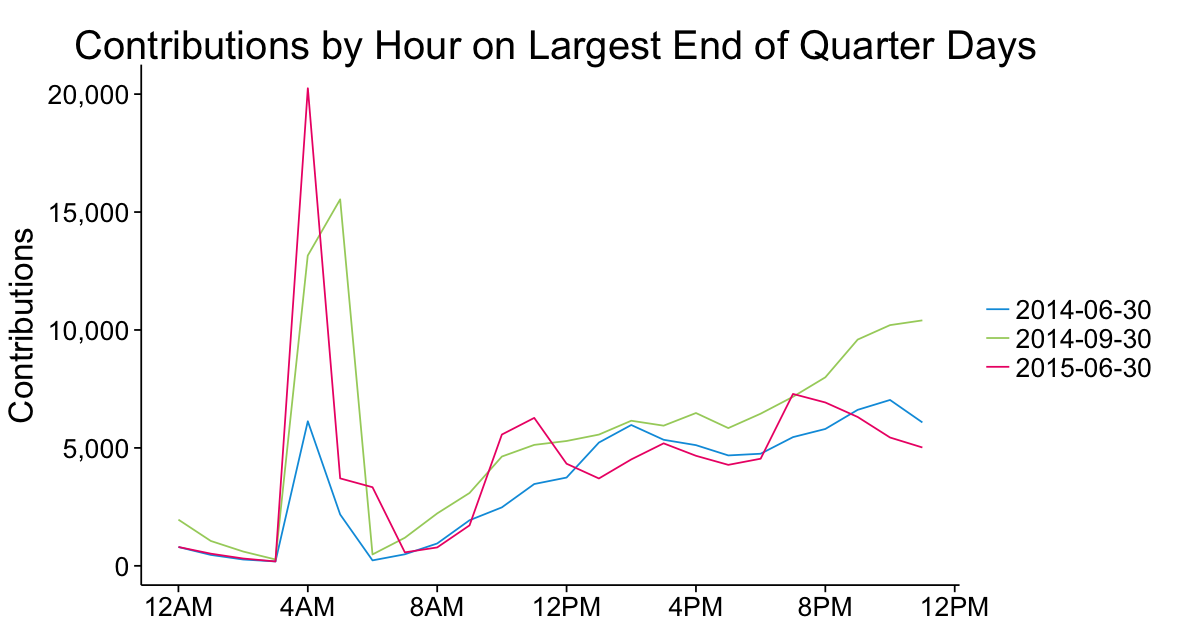 With almost $10M from recurring contributions, Q2 2015 was the third quarter in a row that recurring donations represented more than 20% of the total volume.

Recurring donations help campaigns build strong infrastructures that will power them to victory in 2016. And since we’re still 16 months out from Election Day, those are going to bring in tons of money. Right now, we’ve got over $53 million pledged to campaigns and organizations site-wide.

Express users are donors that have chosen to save their payment information, so they can contribute with just the click of a button.

And the power these donors wield is no joke — Express contributions made up 57.1% of the total dollars raised this quarter. That translates to almost $27M.

It’s numbers like these that prove small-dollar donors are recognizing the importance of their participation this cycle. They’re not only making more individual contributions than ever, but they’re committing to the candidates and causes they support like never before.

We’re also continuing to see mobile giving increase. Last quarter the percentage of contributions made on mobile devices was 24.7% and this quarter we’re up to 27.2%. And that’s up from 8.8% during Q2 2013, our most recent off-year. 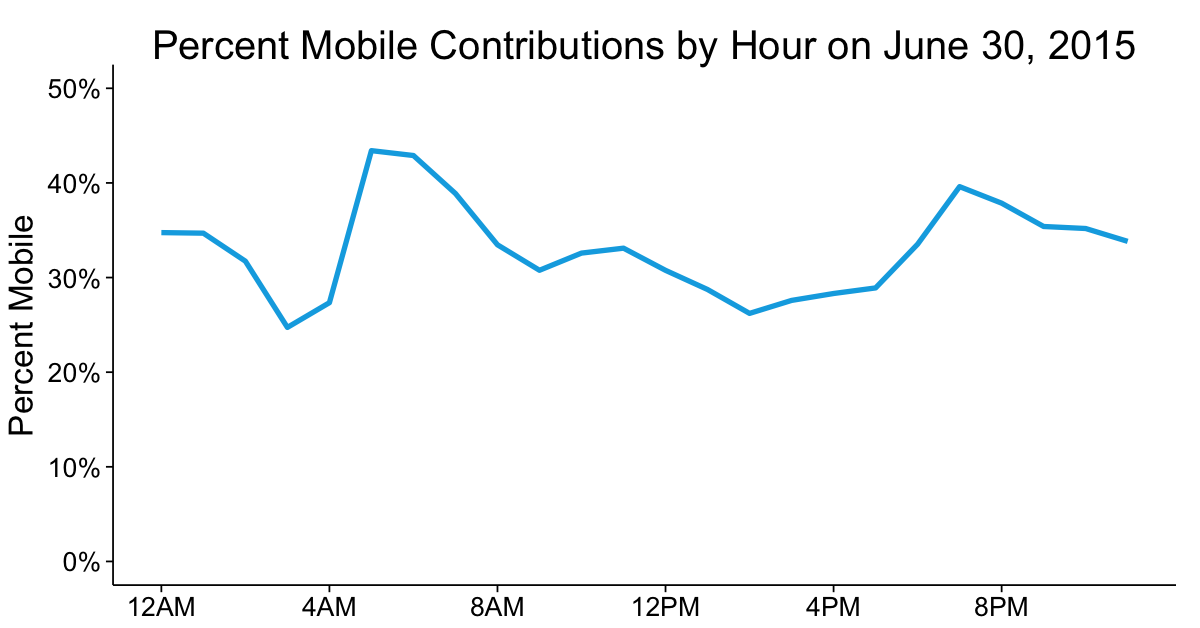 The number of contributions made on mobile devices has tripled in the last two years. And Express user growth and mobile contributions go hand in hand. The percentage of contributions via mobile jumps to 29.2% for Express users. That’s because they can skip the mobile form altogether and just give via a link or button in an email.

While our forms are already mobile-optimized, it’s important to always be thinking of ways to optimize your program. Pay attention to the readability of contribution forms on all devices, work toward increasing numbers of Express Users, and build a recurring donor program as early as possible. You’ll see a huge payoff next November.

And when you do, we’ll be ready to handle all of those contributions, no matter how big these end of quarter deadline days become.

Any questions? Leave us a comment or reach out at info@actblue.com.