As you read this, keep reminding yourself that we’re talking about the third quarter of an off-year. An off-year!

We broke the record for most contributions in a single day: 147k on September 30th. It was also our second biggest day ever in terms of money raised, a total of $5.5M. What’s #1 all time? Well, that was September 30, 2014, in the run-up to the mid-terms.

Here’s how we got there: We started off the morning strong with a peak of 400 contributions a minute (a new record) when we ran recurring contributions as a batch while everyone was sleeping. Later in the evening we were flying at 250 contributions per minute — all new, organic contributions (also a record).

In moments like these, infrastructure matters. Our engineers have been working for years to increase the volume we can handle per minute and everything ran as smooth as butter (or your favorite non-dairy substitute).

Meanwhile, people are no longer chained to their laptops — mobile giving was a powerful force this past quarter, especially in the evening hours, when people are more likely to be checking email on their phones. Between 9 and 10 PM on September 30, we saw mobile contributions spike to an unbelievable 50% at one point (another new record) and finish at an average of 44.3% for the hour.

The chart below details newly made contributions on September 30. You can see the incredible hourly volume we handled and the breakdown of mobile vs. desktop contributions: 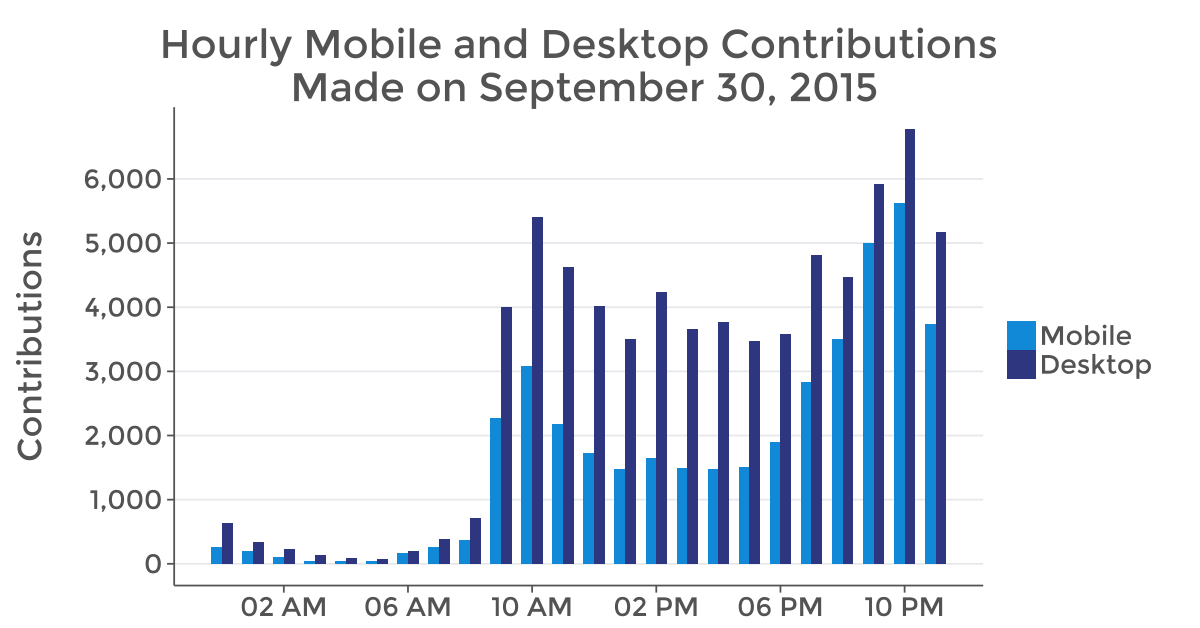 That figure — 44.3% mobile contributions in an hour —is unheard of in this space. For a little context, just two years ago our mobile average was just 15.5% for the month. This leap was only possible because our tech team has focused on improving mobile conversion rates with notable features like Express Lane and on constant, small iterative changes to our contribution form that make it load faster.

There is no way that we would have broken so many records without thousands of hours of developer time going into mobile optimization and sheer processing infrastructure.

The chart below details the pace of the day compared to the other top EOQ days. We know fundraising picks up later in the day, so we process all of the scheduled recurring contributions early in the morning (note the massive number of contributions that start in the 4AM hour). 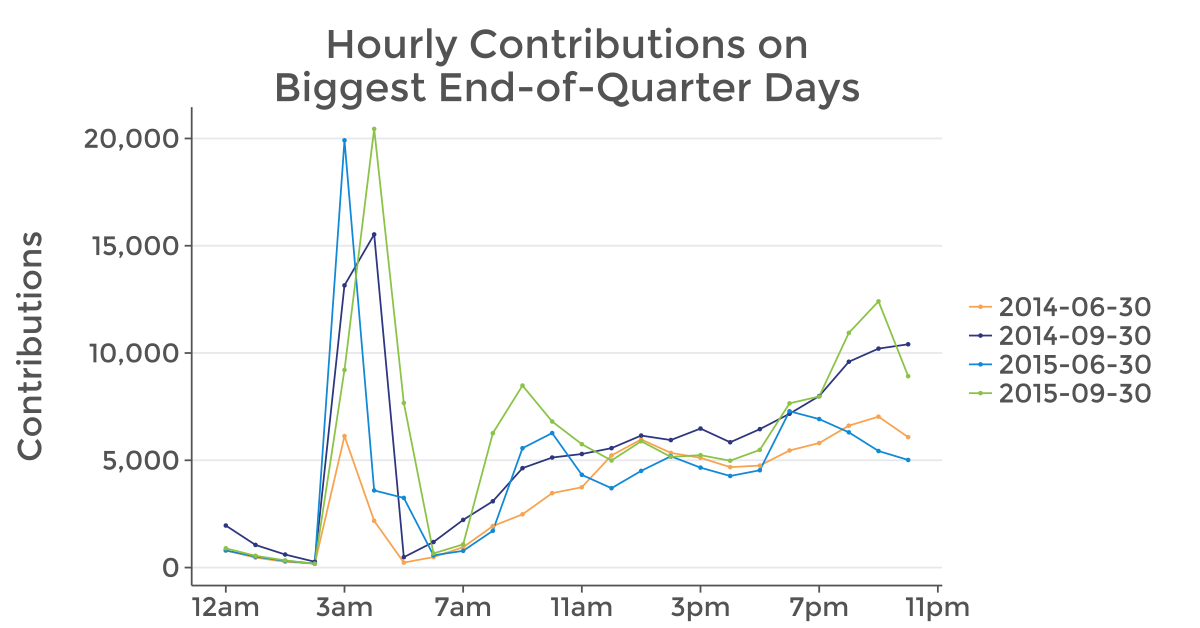 And it’s not all just west coasters giving in the last few hours. It’s folks checking their email on their phones before bed, reading an urgent appeal, and responding. And it’s a beautiful sight to see, for those of us who care about our democracy being for and by the people — not just those who can cut checks for thousands (or millions) of dollars.

But this quarter was about more than just the EOQ deadline. Here’s what we wrote to recap the first quarter of this cycle:

If current trends hold, ActBlue could process half a billion dollars in small-dollar contributions this cycle.

Well…it’s been nine months and we’re already well past the $130M mark. It’s fair to say we’re well on our way to hitting that target. And $56M of that money came in this quarter alone (scroll down to see how this quarter compares to previous years).

Campaigns, organizations, and committees are coming out in full force this year. So far this cycle, almost three thousand different campaigns and committees have raised money using ActBlue.

It’s all a sharp contrast to the massive checks the Republican super PACs have been cashing.

The bigger the pool of active, engaged donors, the stronger the party. That’s why we place such a strong value on our whopping 1.7 million Express users, who have saved their payment information with ActBlue. What’s important is not just the sheer size, but how recent and active these donors are. We’ve added more Express users (267k) this quarter than in any other. And we added an incredible 24k on EOQ day alone (new record)!

One reason why that’s the case: high Express conversion rates. This past month, 38% of donors eligible for an Express account signed up for one. Last cycle, we were averaging just over 20%. It’s an indication that more and more new donors are coming in and immediately thinking ahead to their next donations. That’s a huge strength for the party right now. 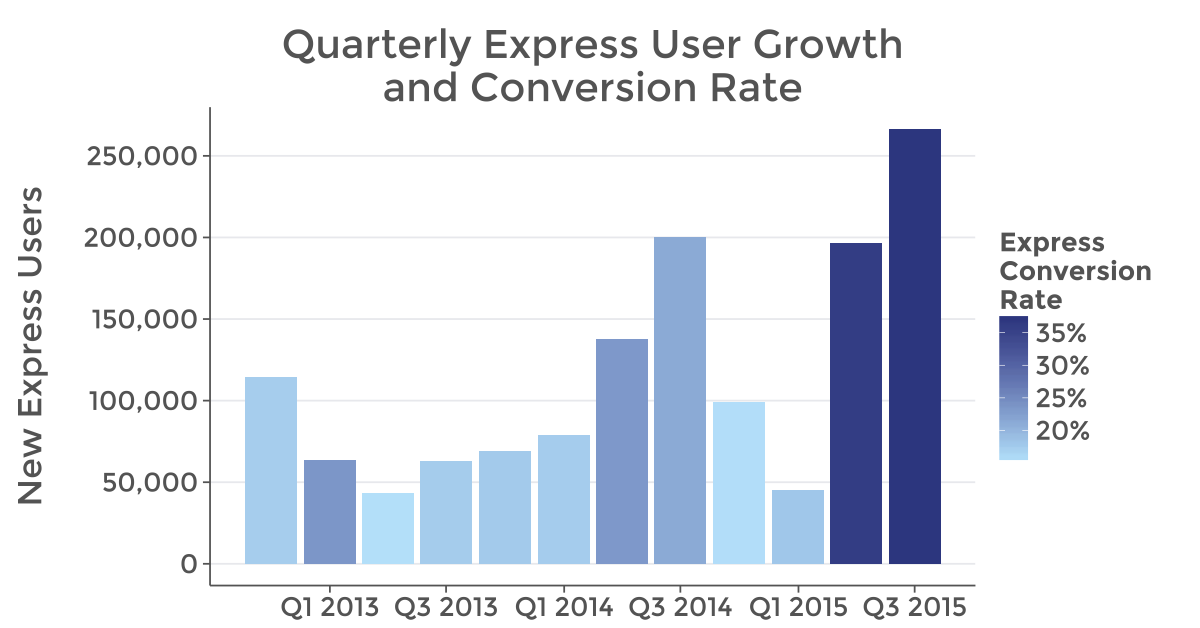 A bigger Express donor base is in the interest of Democratic organizations and campaigns of all sizes. As our Executive Director Erin Hill said in the Washington Post on Wednesday:

“Small[-dollar] donors are becoming the backbone of Democratic giving.” And the Republicans have nothing like it.

The chart below shows both the number of new Express sign-ups and the rate at which non-Express donors are signing up as Express users over the past 12 quarters.

Below we break down this quarter compared to previous quarters.

Some interesting nuggets from this data: We processed more than double the dollar amount we saw in our last off-year, Q3 of 2013. And there was an even bigger growth in the number of contributions from two years ago. We jumped up from 637,924 to a massive 1,643,083 contributions this quarter. That’s a 259% increase.

Recurring contributions remain the best way to sustain a campaign or organization in the long-term. And we’re continuing to see huge strides forward with recurring. On the morning of September 30th, we processed our biggest recurring haul ever: about $700k in recurring donations, from 37k contributions.

Look at the huge jump in the overall recurring numbers for the quarter. A full 23.9% of all the money that came in this quarter was from recurring contributions. That’s phenomenal!

This doesn’t all just happen. We’ve spent a lot of time extolling the virtues of a strong recurring program and helping campaigns and organizations increase their conversion rates. At the same time, Americans are starting to get more comfortable with giving monthly. Recurring is a huge percentage of the money raised by international NGOs. They’ll spend up to $175 on acquisition per person, because of the lifetime expected value of a recurring contribution.

Campaigns don’t value recurring contributions quite that highly yet, but it’s exciting to see the tide turning. It’ll lead to much more stability for campaigns and organizations. And they’ll be able to focus more on core work beyond fundraising. Plus, donors love being able to easily give on a regular basis to the candidates and organizations they care about.

To all the hardworking digital campaigners out there who made this quarter such a success, congrats! We’re proud to help you fuel your campaigns and organizations. Drop us a line any time if you want to talk strategy, or just have a question: info@actblue.com.