Breaking records doesn’t ever get old around here. Then again we’re a bunch of digital fundraising nerds that get super excited about participation in democracy and our larger society.

And we did a ton of celebrating this quarter. Not only was December 31st our biggest donor day in history with 150k contributions, but we handled more volume over the last four days of the quarter than we’ve ever handled during a four-day period. Yep, even bigger than the lead up to the 2014 midterms. It was a virtual wave of grassroots money flooding into thousands of campaigns and organizations.

That doesn’t happen without tons of dedicated staffers working for candidates and organizations grinding it out over the holidays, working to reach more donors, and get more people participating earlier than ever in a crucial election cycle.

We broke plenty more records this quarter as well. Q4 saw the most Express users ever added in a quarter — 302k — which brought our total number of donors who have saved their credit card information past the 2 million mark.

I’ll admit that I didn’t think we’d reach that big milestone by the end of the year, but there was a tremendous surge at the end of December that put us over the top. We added the most Express users (31k) in a single day on December 31, 2015 — part of our unending quest to make it increasingly simple and easy for folks to give again in a single click.

During the last quarter of 2015 we handled 2.4M contributions — you guessed it, another record. Here’s a chart comparing Q4 2015 to past quarters, dating back to the 2012 election cycle: 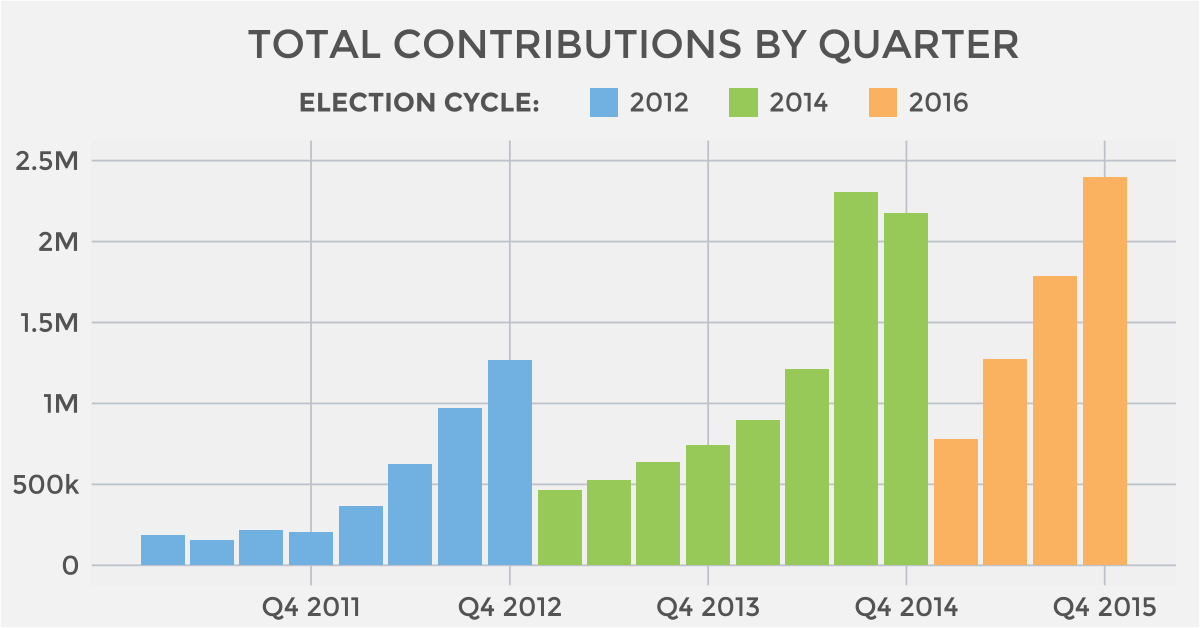 As you can see, the two previous cycles started out with slow growth, with the major growth happening in the last two or three quarters. That’s not happening this cycle. We’re seeing consistent increases quarter over quarter.

And yes, given this crazy growth pattern we’re busting our tails right now to make sure our underlying technology infrastructure continues to be rock solid. Not for nothing, while there were major enterprise-grade tech problems at the end of the year, ActBlue stayed up and processing contributions like it was any normal day.

It’s also worth pointing out that we’re past the $200M mark for the cycle. To put that in context, that’s $20M more than we handled in the entire 2012 election cycle, the last presidential cycle. And we’re nearly two-thirds of the way to 2014’s $320M benchmark (our biggest cycle).

So yeah, we’re well ahead of schedule to surpass half a billion dollars this cycle. 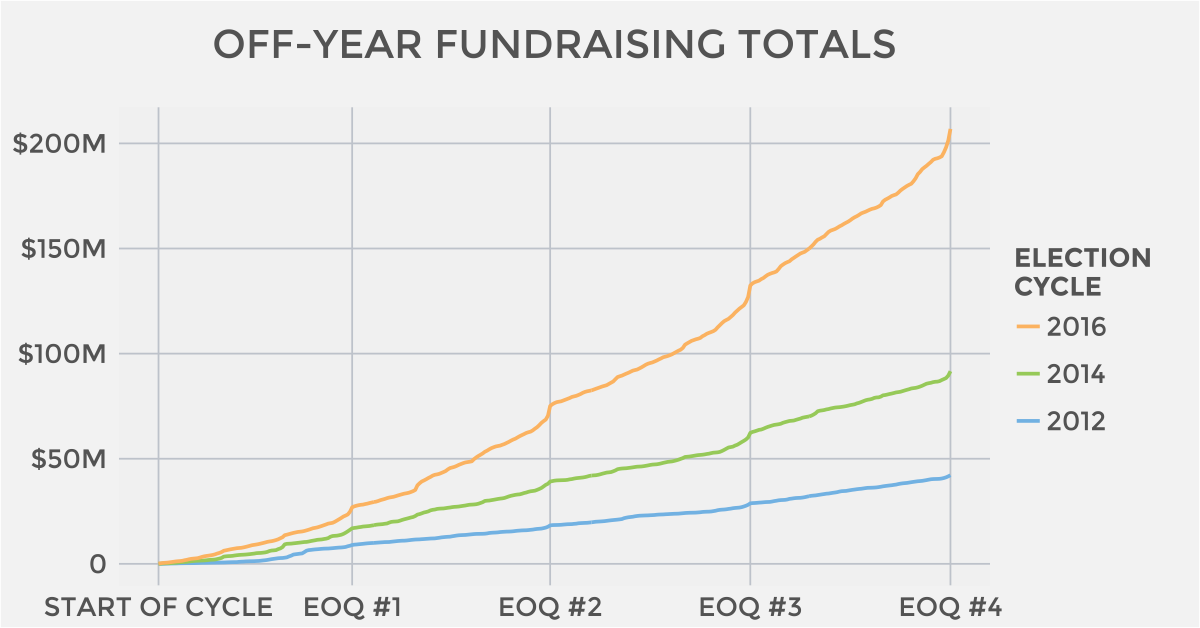 It’s proof that donors are in the giving mood (or at least still checking email!) at the end of the year — even if those donations aren’t tax deductible, like political contributions. Email is an evolving art, but it’s a good idea to keep this in the back of your head for planning out your send calendar for the end of the year.

But let’s focus on our biggest donor day ever — because December 31, 2015 was big and mobile-intensive. Here’s what the hour-by-hour looked like for contributions made on New Year’s Eve: 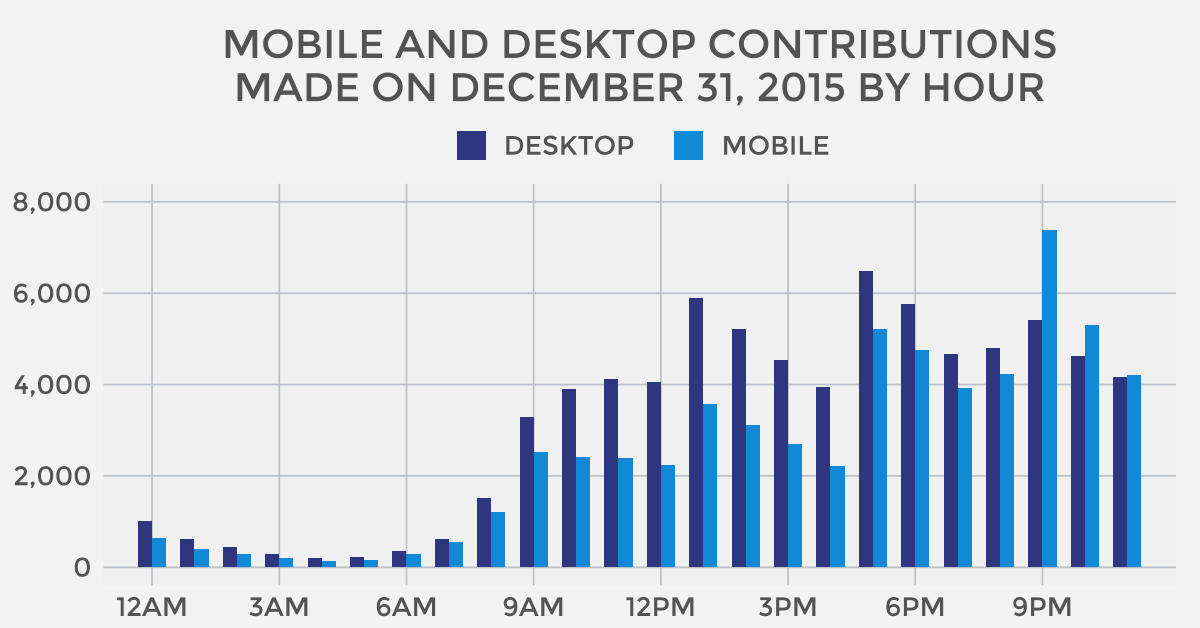 It won’t be long now until >50% mobile is standard stuff, but right now this is new and exciting. And it’s also a reminder of how important it is for sites to load quickly during big traffic moments, especially when people should be enjoying a party and not fiddling with their phones.

And for those that are wondering how December 31, 2015 shaped up to the other three biggest donor days in our history, look no further than the following chart: 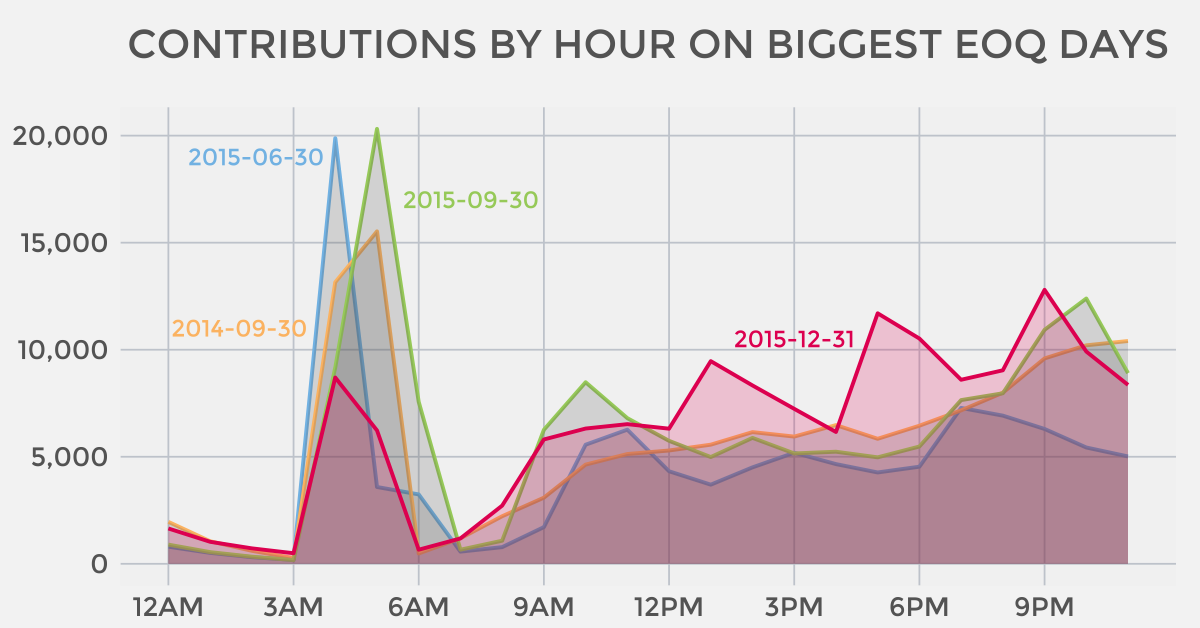 Just three months ago on September 30, 2015 we handled 147k contributions. The final tallies for September 30, 2014 and June 30, 2015 were 136k and 106k, respectively. What makes December 31, 2015 unique is the smaller bump at 4AM, which is when we process queued recurring contributions in a batch. We run this in the early morning to make sure our platform isn’t clogged up when the hourly volume picks up later in the day. For months that end in “30” we process recurring contributions made on both the 30th and 31st of a month, which is one reason why you see those huge upticks between 4 and 5AM for the other three biggest EOQs. There was just that much more organic traffic on December 31, 2015 to set the record for biggest donor day.

Below we break down this quarter compared to previous quarters.

We’re out-pacing where we were last election cycle by more than three times the number of contributions and more than twice the total volume. More committees, campaigns, and organizations are fundraising at this point in the cycle than last cycle, too. And we’re actually not that far off from the number that were fundraising over the last few days before Election Day in 2014.

Express users are our power users: Two out of three contributions made this quarter were from Express users (compared to a little more than one in two during the last off-year). Donors are also signing up at a fast clip: we added 816k new Express users this year, which is more than we signed up for Express throughout the entire 2014 election cycle.

The Express universe is huge, new, and active — donors consistently use their accounts to make contributions. It’s a big reason why we had such a monster Q4.

We’ve already talked about the huge spikes we saw during the last day of the year, but more than one in three contributions made this quarter were made on a mobile device. That’s the highest rate in our history. And it’s even higher for Express users because they’ve already saved their credit cards with ActBlue, which means they can give with a single-click using Express Lane.

We couldn’t possibly talk about all of these insane numbers without mentioning our rockstar Customer Service team. They spent December 31st handling 2,791 email conversations and fielding 941 phone calls from donors across the country.

Over the course of the entire quarter, the team had 38,671 email conversations and answered 46,297 incoming phone calls from donors, making it possible for the campaigns and organizations using ActBlue to focus in on their fundraising programs and have a successful end to 2015. We work relentlessly to support donors in a timely manner, because it’s the right thing to do and because it makes them more likely to come back and give again.

But wait, one more! We’d be remiss if we didn’t point out that we just passed the $900M mark for the total raised in our eleven-year history!!! That big B (billion!) word is in sight! #roadto1B

In case you missed it, here’s a recap of our fantastic year: report.actblue.com. As always, we like email and would love to get one from you, email info@actblue.com and a real, live human will respond.