Wow, this has been some beginning to 2016. We launched ActBlue Charities, passed the $1 BILLION mark, and had back-to-back biggest months ever.

At the end of last year, we were over the moon about handling 150k contributions in a single day on December 31, 2015. Well, we handled twice that on February 29, 2016 and surpassed 200k contributions two more times this quarter. 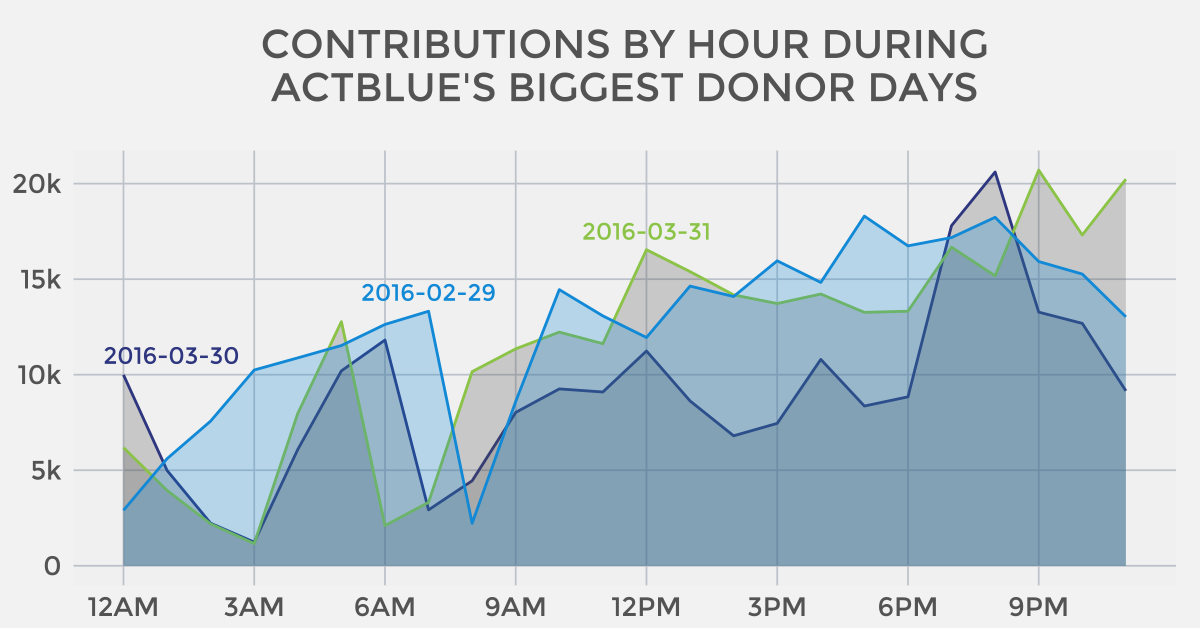 There are many things that go into massive days like this (and not just a lot of email).

For one, we typically run recurring contributions in a series of batches starting at 4AM. That pattern is evident on the two days in March, but our tech team actually scheduled out February 29th a bit differently because all recurring contributions originally made on the 29th, 30th, and 31st of any given month needed to be run in a single day. We processed over 80k recurring contributions that morning (new record, by far) by starting earlier and capping the contributions per hour, and we were ready to handle the end-of-month rush well before 9AM. Gotta love when a good plan comes together…

We saw March 31st bring in a ton of traffic at the end of the day, with two hours of more than 20k (!!) contributions after 9 PM. Volume stayed unbelievably high until the steep drop off at midnight. And yes, people really do respect it as a deadline and stop giving when the clock strikes twelve on the East Coast.

Almost 3,000 different campaigns, organizations, and committees raised a total of $165M this quarter, with the average contribution size under $30. For context, it took us more than four years to pass that dollar total and more than nine years to pass the 5.5M contribution mark — both of which we just accomplished in three months. Yeah, that’s nuts.

More and more people are supporting the non-profits, campaigns, and causes of their choice via the ActBlue family of organizations. Of the 1.8 million people who gave a contribution this quarter, 65% had made a donation on our site before.

Those repeat donors are the lifeblood of so many campaigns and organizations. And that’s why our system is designed to reduce friction, making it painless to give again. ActBlue Express is at the heart of it, allowing donors to give with a single click, again and again. Of these repeat donors, almost 9 in 10 have saved their credit card information with ActBlue. Plus, nearly 3 out of every 4 donors who made a contribution for the first time in Q1 2016 signed up for Express accounts.

More people have created an ActBlue Express account already this cycle than in every other cycle combined.

And looking at just this past quarter, over 750k people signed up for an Express account — that’s more than twice the number who signed up in our previous biggest quarter (Q4 2015 had 302k new sign-ups). Altogether, we’re up to an incredible 2.9M Express users.

Almost three-quarters of all contributions on ActBlue at this point are made by Express users. That added up to over $110M from Express users last quarter.

Saved payment information is no longer the future; it’s the new normal here at ActBlue.

The chart below shows both the overall growth in the number of contributions, as well as how the number of Express contributions as compared to those made by non-Express users is increasing. For much of last cycle, there was not much difference between these types of users, but the ratio has become closer to 3:1 recently. 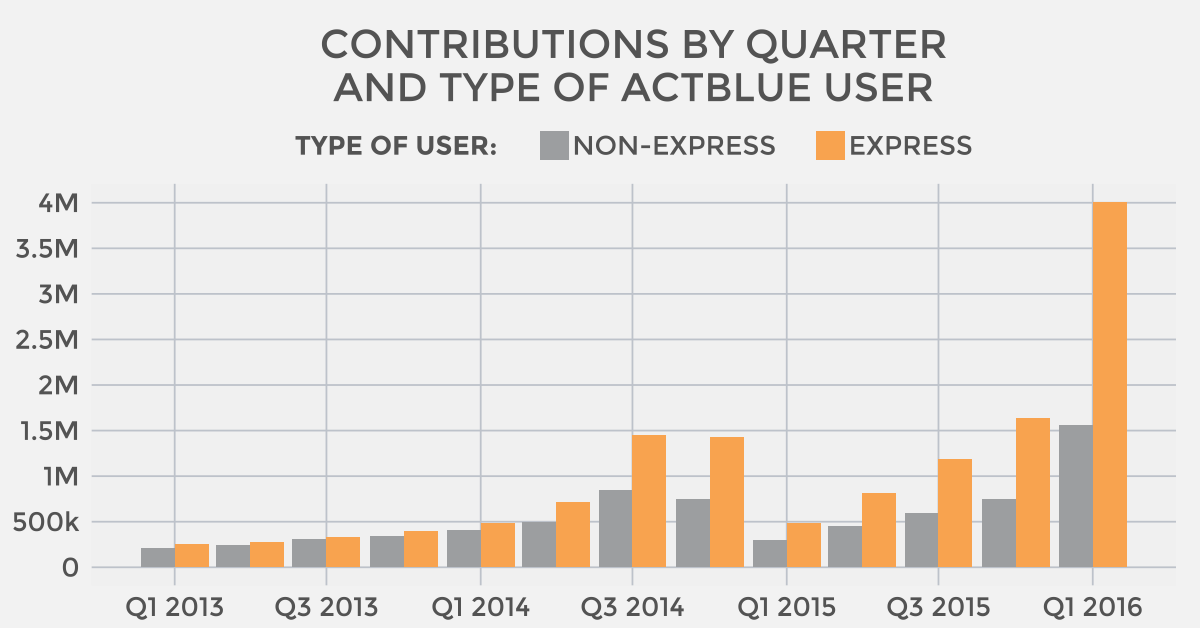 There are a lot of reasons why we’re seeing this big spike in Express donations. We’ve run a number of optimization tests with the goal of boosting Express sign-ups and the use of donors’ saved payment information. There haven’t been any breakout tests, but the slow and steady tweaks have added up over time.

At the same time there is a broader movement coming from the e-commerce industry to promote saved credit card information, with Visa checkout being the most visible example. More Americans are comfortable saving their financial information online, and we work hard to earn and keep their trust. ActBlue is Level 1 PCI compliant — the gold standard for security — and we undergo a rigorous audit every year to maintain it.

The larger trend toward mobile is having an impact as well, as Express users continue to outperform non-Express users on non-desktop devices.

Making it possible for people to give with a single click means higher conversion rates. More and more people are making donations on mobile devices. It’s part of a wider traffic trend away from desktop and toward mobile. This quarter alone, over 41% of contributions were made on a mobile device. That’s double the mobile giving rate we saw at the same point last cycle (Q1 2014 had a mobile rate of just 20.5%). 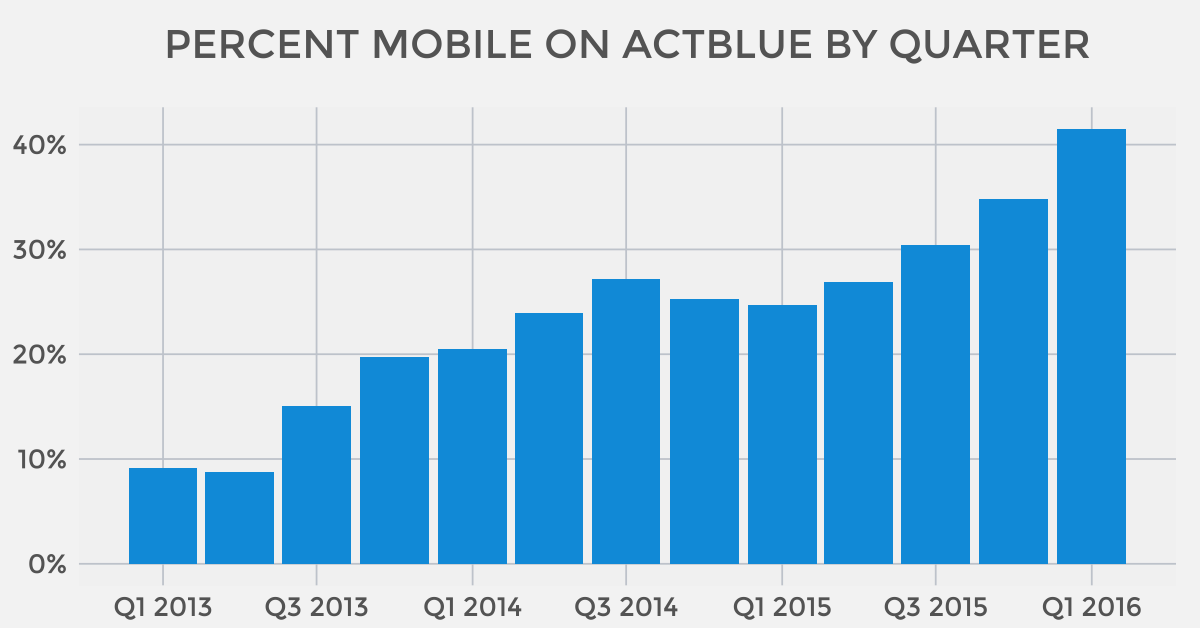 And the mobile contribution rate jumps to 44% when looking just at Express users, who — as we’ve alluded to already — are our power users. We’re expecting to cross that 50% threshold very soon! 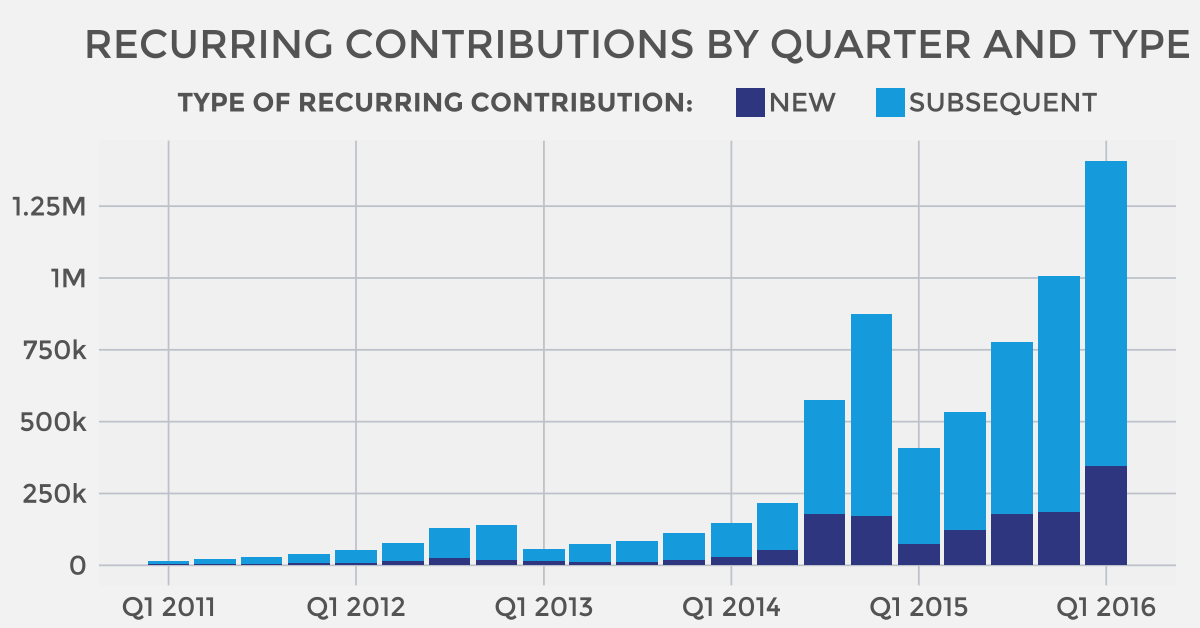 How big was this quarter? Well, the number of new recurring sign-ups in the past quarter (347k) was more than all of the total recurring contributions made in Q1 2014 (new + subsequent).

One of the best parts of a recurring program is that it provides a steady stream of income for campaigns and organizations that allows them to plan out their fundraising goals from month to month with ease. If you’re not running a recurring program and you’re interested in starting one, drop us a line at info@actblue.com and we’re more than happy to help strategize.

It was a helluva start to 2016. We’re excited to see what the rest of the year brings. In the meantime, our tech team is hard at work on a number of infrastructure upgrades, optimization tests, and some cool new features (as always). So stay tuned. And may the email odds be ever in your favor.