A busy quarter before an even busier election: Q2 2016

Q2 2016 was strong; back in Q2 2014, folks using ActBlue’s fundraising tools had raised just shy of $48 million. For this quarter, we’ve passed $130M! Talk about an exciting upwards trajectory.

Q2 2016 had 2.8 million more contributions than Q2 2014. That’s more than 200% growth. Donors contributed to 3,753 different campaigns, committees, and organizations. Our average contribution size has shrunk a little, because of the impact of repeat donors. The average contribution size for new donors was $55, compared to $30 for donors who have given previously. More than 1.2 million unique people made a donation on ActBlue in Q2 2016, and, of those, 80% made more than one contribution. That’s only the second time that at least one million individual people have given in a single quarter on our platform.

During Q2 2016, we hit another major milestone: over $500 million raised via ActBlue for this election. For context, the combined total raised for the 2012 and 2014 cycles is $517 million. It took the entire 2014 cycle to raise $335 million and just over 15 months to reach that total this election year.

Our number crunchers had been predicting our total for the entire 2016 cycle would be $500 million. But now we’re more likely on a path for something around a $700 million cycle.

We’re already ramping up for another big quarter — Q3 is traditionally the largest in any cycle. (Looks like we’ll need a bigger chart.) 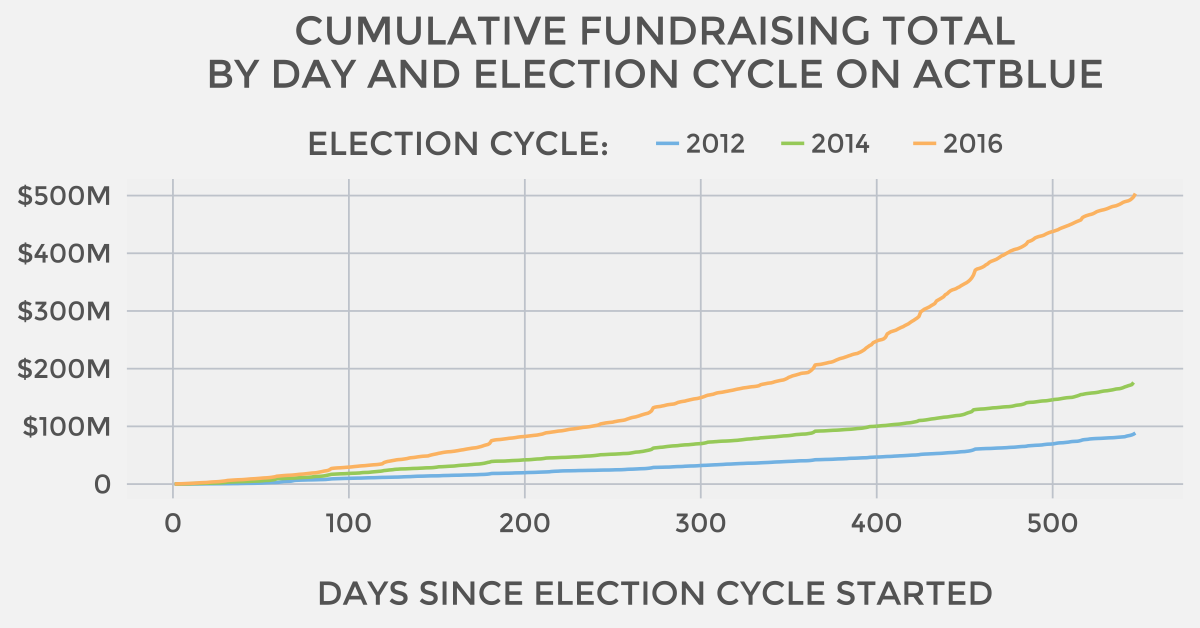 The graph below breaks down our top-line stats further (and says it all): Express contributions have increased from less than 10% at the start of the 2012 election cycle to 70% of all donations this past quarter. The mobile contribution rate has hovered around 40% the past two quarters, which is about double the rate for the same points in the last election cycle. Recurring as a share of the total fundraising volume tends to fluctuate more than the other two metrics within a cycle. If you look just at the 2016 election cycle, percent recurring volume has landed in the 15-28% range each quarter. 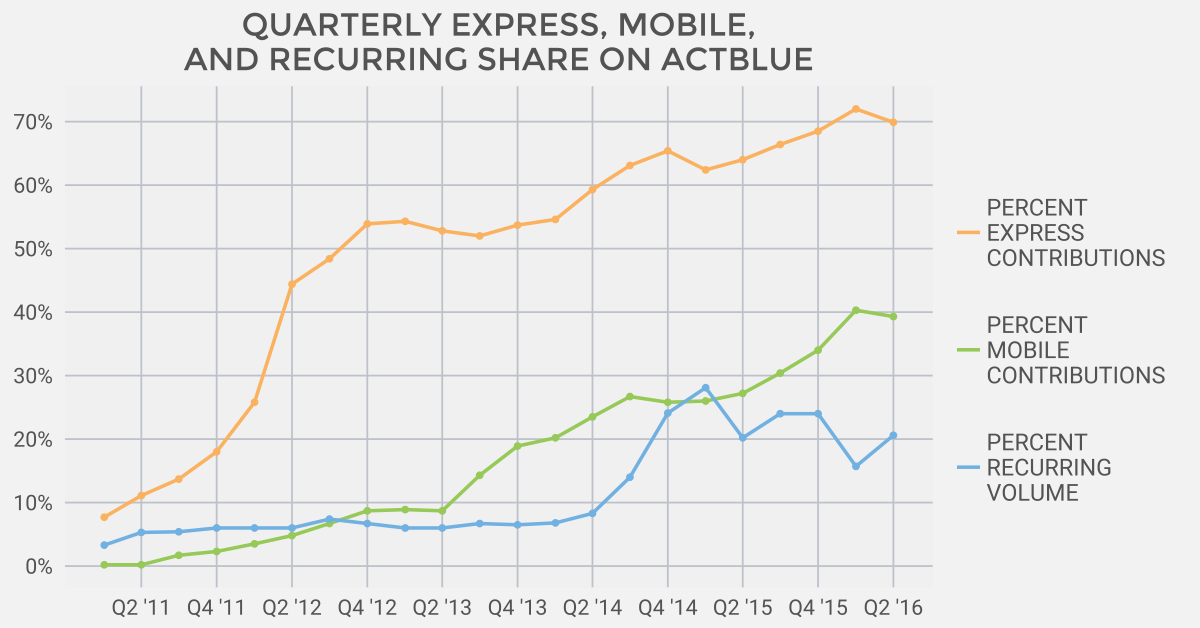 Our Express feature, which allows donors to save their payment information with us, helps donors give (literally) with just the click of a button. The majority of our 3 million Express users have signed up this cycle.

Because it’s easier for people to give when they don’t have to spend time entering in their address and credit card information, they’re more likely to go ahead and contribute. In Q2 2014, we raised about $28 million from Express contributions. Fast forward two years, and we’re at almost $83 million raised via Express for the quarter. And I know we mentioned it earlier, but it’s too stunning a stat to only say once: Express contributions now make up an incredible 70% of our total contributions. Plus, with 4 million contributions overall and 1.2 million unique donors during Q2 2016, it’s clear that we’re getting a lot of repeat givers thanks to the overwhelming success of our Express feature.

This time last cycle, 14% of our contributions were recurring. Now, that number’s at almost 42%. Why the increase? Recurring donations work well for both the fundraiser and the donor as an easy way to make regular contributions, providing a stable fundraising base. Plus, we’ve been helping lots of campaigns and organizations figure out a recurring donor strategy.

The chart below shows the incredible growth we’ve been seeing in recurring, particularly from Q2 2014 to this quarter. The spikes on the chart below are the last days of each month. That’s when we see the highest number of contributions. The typical daily recurring volume in Q2 2016 was significantly higher than even the busiest days in previous second quarters. When we look at the last days of each month this quarter, 2014 and 2012 are left totally in the dust.

One of our favorite features, weekly recurring, will be back at the end of this current quarter for some groups using ActBlue. Our team can turn on weekly recurring six weeks ahead of the election. It’s a great way to get donors excited and primed for Election Day, and to raise critical cash for your cause at the most important time. If you’re interested in learning more about how weekly recurring could give your campaign a boost, start planning your weekly fundraising strategy now. We’re more than happy to help brainstorm with you.

We expect to have some big Q3 news about exciting new innovations in recurring giving, and our engineers are hard at work. Stay tuned and excuse our vagueness, but watch this space!

We’ve broken down the mobile percentage day-by-day for Q2 2016 so you can visualize how it changes over time.

Notice the spike in mobile contributions towards the end of the week and on weekends. Saturdays and Sundays were peak mobile days throughout the quarter, and it’s likely that these are times when people are less tethered to their computers, which is why they do more of their giving from mobile devices.

We can’t really take credit for the popularity and spread of iPhones and other mobile devices, but we can take credit for optimizing our forms for mobile. Our high contribution volume affords us lots of space for A/B testing and optimization. Plainly put, we have the best mobile experience in nonprofit and political giving out there. Our mobile contribution rate speaks for itself.

Our customer service team is working hard to make sure donors always have a good experience, so that the organizations and campaigns who use our tools can focus on doing the organizing. Inquiries are always a percentage of volume, and for Q3 2016, we expect volume to go up, meaning our CS team will be even busier than this past quarter. As we get ready for one of the most critical elections of our lifetime, time will be of the essence, and campaigns will need to use every dollar they’ve raised as quickly and efficiently as possible.

To handle the traffic, we’ve expanded our customer service team so that there are folks always ready to answer questions and resolve issues as quickly as possible. And we’ve intentionally staffed up to have more coverage in the evening and weekend hours to be as responsive as possible to donor questions.

We launched our remarketing feature in February 2016, which reminds donors about a contribution they’ve started to make but haven’t completed after 30 minutes of inactivity. In Q2 2016, contributions from remarketing totaled more than $500,000 — all campaigns and organizations had to do was turn the feature on form-by-form and our infrastructure took care of the rest. Find out how to turn it on here, if you haven’t already.

Almost half of remarketing contributions are made from mobile devices. The average monthly mobile contribution rate for remarketing is 9 percentage points higher than the sitewide average. We thought this stat was interesting, and have more than a few theories that might explain it. What we know for sure is that when donors get that remarketing email, we’ve tracked where they were in the giving process, so all the information we know about them has already been pre-filled. And that makes it really easy to complete a contribution, particularly on a mobile device.

Shifting people from desktop to mobile during the giving process also means that donors will have their information stored on multiple devices, reducing friction the next time they want to give. And that is a great thing, my friends.

Where are donors based? It’s on every email fundraiser’s mind. We ran the numbers for contributions made using ActBlue and came up with the chart below. As always, keep in mind that every individual list is different. 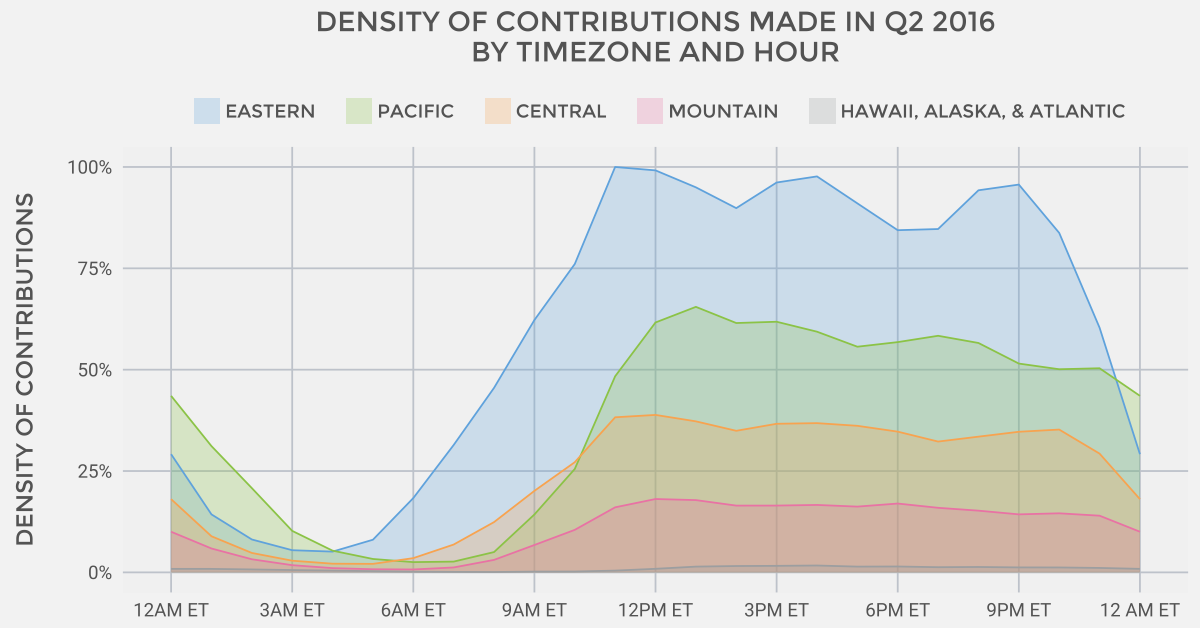 One last fun fact we pulled from this dataset: West Coasters in the Pacific time zone made more contributions per donor on average (3.84) than in any other time zone this quarter. So, there’s a little more green in that chart than if they had given at the same rate as the combined category that includes the Alaska, Hawaii-Aleutian, and Atlantic time zones, for example.

One of the most exciting things about this quarter was how even without presidential traffic, we’re running at nearly double the last election in terms of funds raised. And of that non-presidential volume, over 15% was raised in just three days this quarter: the last days of April, May, and June.

As we move into the general election, we’re expecting the amount of contributions we’re processing to rise, particularly at the end of each coming month. Q3 2016 will likely be a record-breaker. The only question: Just how big will it be?