Q3 2016: It’s definitely the quarter before an election

Why the uptick in volume? We handled donations for over 4,000 campaigns, committees, and organizations as they made their way into the final stretch of an incredibly important election cycle. That’s a 33.9% increase over the number of groups using ActBlue in Q3 2014. What else is exciting? Compared to Q3 2014, we handled $20M more in recurring dollars, which is a whopping 172% increase. And recurring contributions made up more than one-fifth of our total funds raised.

Read on to see how our sitewide fundraising compared to where we were at the same point back in previous years.

In the chart below, we break down the total number of campaigns, committees, and organizations using ActBlue by cycle. The vertical axis shows the running total for unique groups raising funds on ActBlue, while the horizontal axis represents the days in the cycle with the first day of each quarter as the labels. 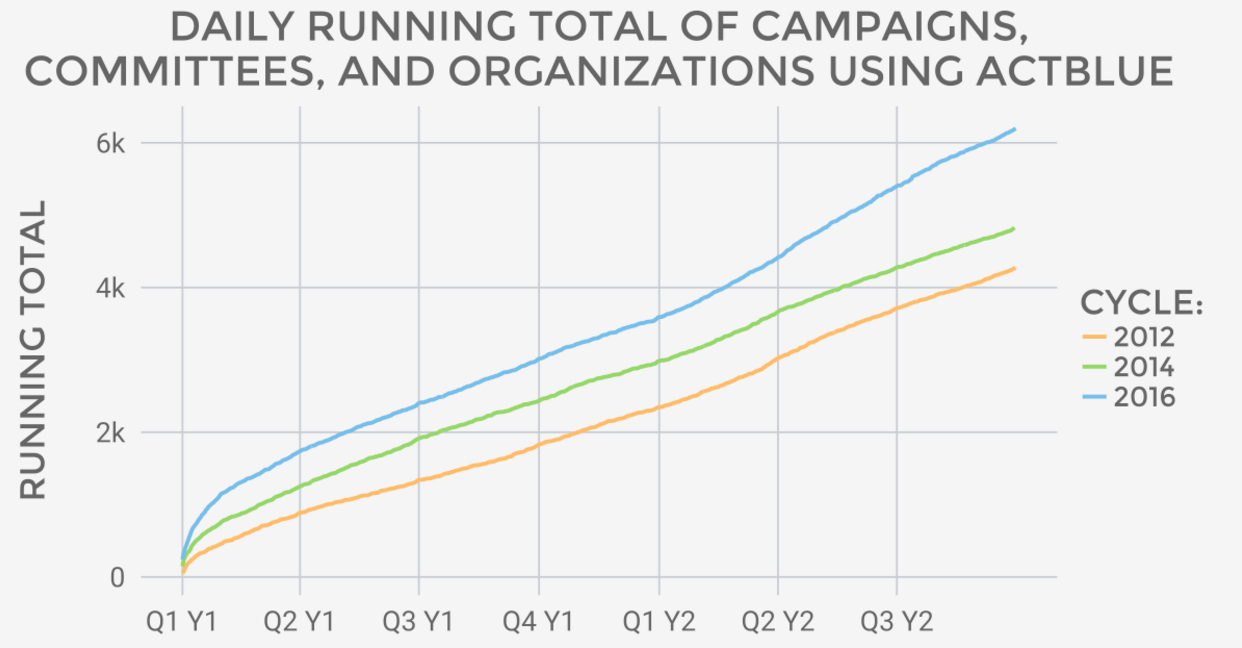 Look at that rapid growth in committees and orgs using ActBlue! Almost 6,200 different groups used our tools to fundraise in this election cycle, with over 4,000 active groups this quarter. We had almost 800 new candidates and groups sign up this quarter, which is huge compared to 560 new signups during this time in 2014 and 558 in 2012.

This election cycle, we’ve expanded into new cities and counties. We’re working with a higher percentage of federal campaigns than ever before. And the best part is that we offer the same fundraising tools to candidates in school board races as we do to presidential candidates. We’re constantly innovating. We’re a one-stop shop where folks can give to all the causes they care about, at any level of government, no matter how big the race or how small the organization.

In true ActBlue fashion, once we hit an exciting number, we have to keep upping the ante. 65% of our contributions this quarter were made via Express, and as of Q3 2016, we have over 3.2 million Express donors! And they’re an active bunch. In Q3 2016, we handled over $75 million in recurring contributions from folks who saved their information using our Express feature. As a quick refresher, our Express feature lets donors save their payment information with us and donate with a single click, making it easier for them to give (win, win). And in an election cycle like this where every dollar really counts, that efficiency and speed make a big difference in fundraising. 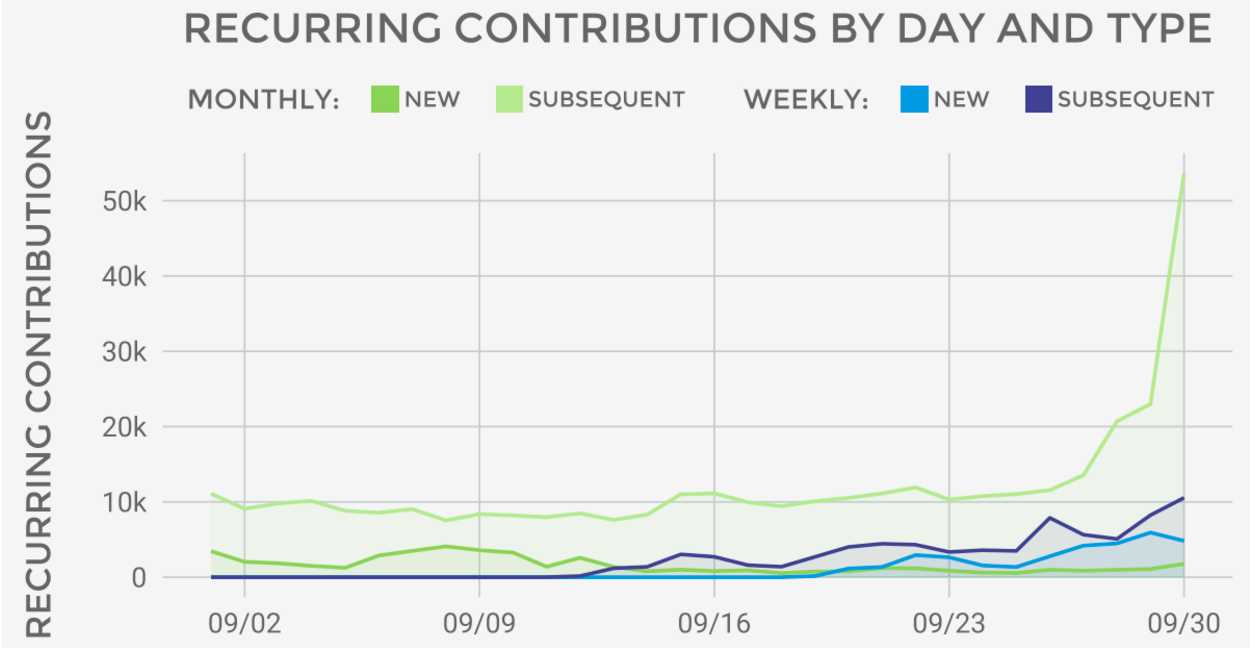 Q3 before an election has historically been a big quarter (no surprise there). But this election cycle features seven out of the eight greatest quarter over quarter increases in terms of recurring donations. Back in Q3 2014, we handled only about a third of the recurring contributions we handled in Q3 2016. And in 2012, which was the last presidential election year, we handled less than $5M in recurring volume. That means we’re now raising over six times what we did in the last presidential election. Pretty cool. 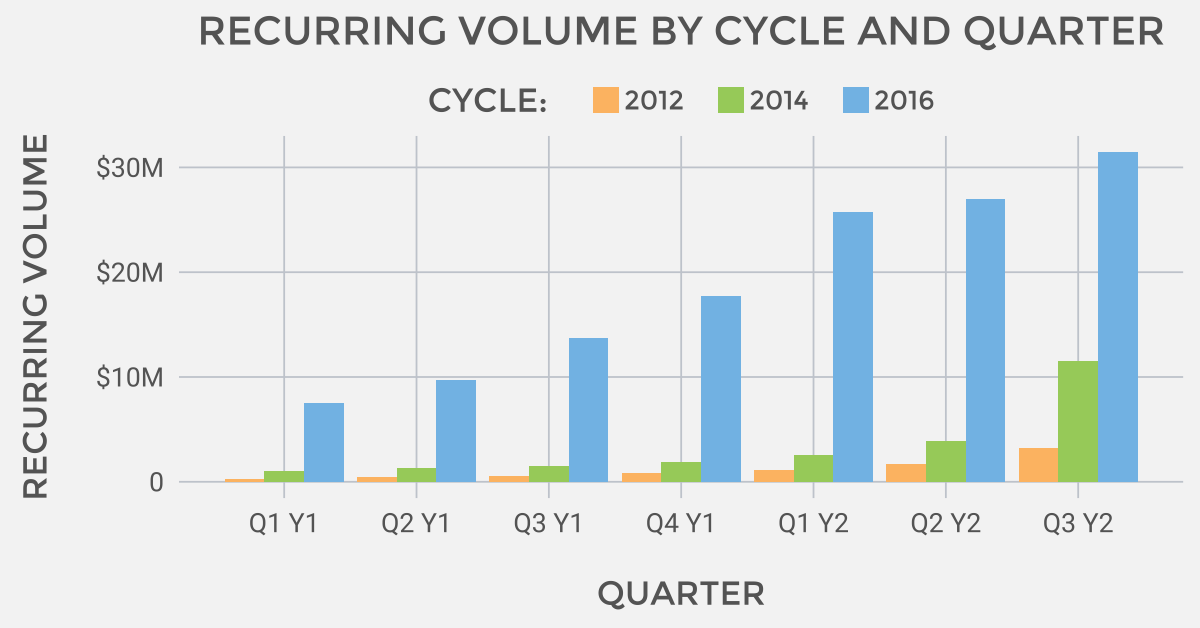 It was another strong quarter for giving on the go — 30% of the funds we raised came from a mobile device. And while people are definitely using mobile devices to do more, more often, we can’t chalk up the success of mobile giving just to time alone. 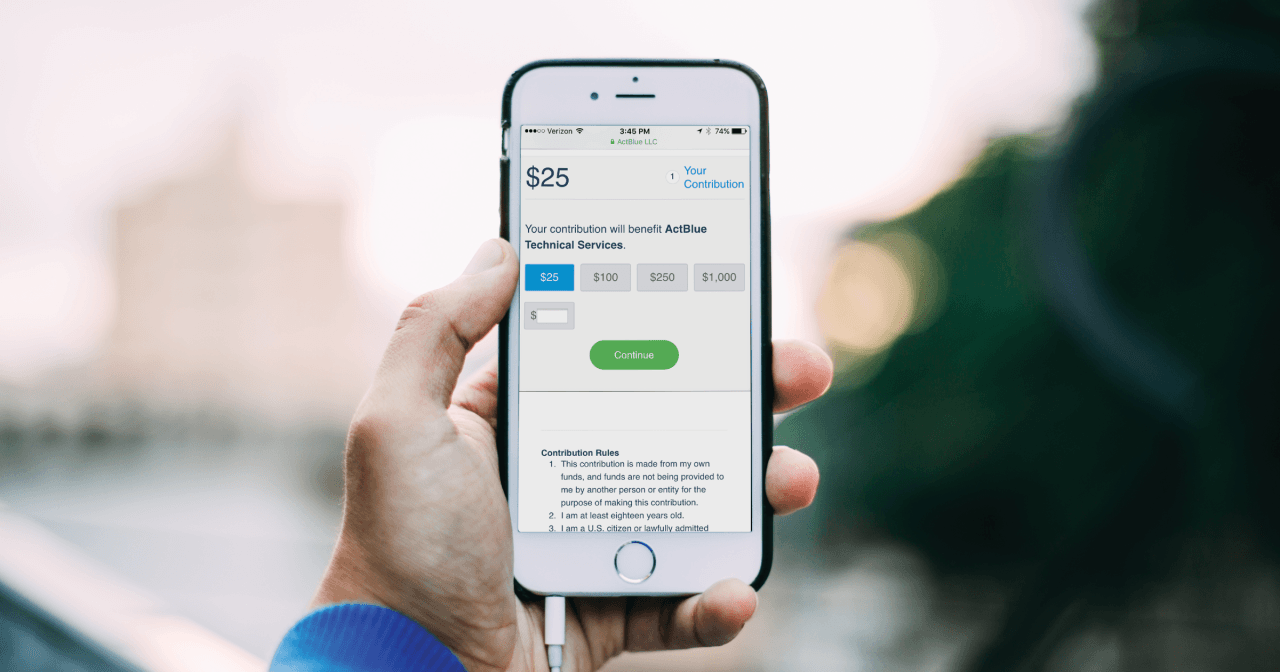 We’ve also spent a lot of time optimizing for mobile. We tested and implemented a new feature: when mobile donors land on a form, they’re automatically taken past the contribution blurb to the part where they choose how much to give. With an increase of 5.2% in sitewide conversions (p < 0.05), that optimization has translated into real cash. We’ve also added an autocomplete search feature that populates your address on contribution forms, which has already started to boost our numbers. The goal with mobile is making it as easy as possible to give from a smaller screen, and that’s what we’re going to keep improving on.

It was another busy quarter for our customer service team, who handled an incredible 28,490 calls and had 72,504 email conversations with ActBlue donors. At midnight on September 30th, the last day of the quarter, there were a grand total of zero donors waiting to have their emails and calls returned. Our team had squared away their emails and calls in real time!

From folks who are giving for the first time and have questions about the process, to returning donors who want to check in about their contribution, our customer service representatives handle it all. They helped make the giving process as smooth as possible during this extremely busy quarter.

In February 2016, we launched our remarketing feature. When enabled, it sends a reminder email to donors who have started but failed to complete a contribution after 30 minutes of inactivity.

This quarter, remarketing helped bring an extra $420,000 in the door from over 13,000 contributions. In an election cycle where every dollar matters, that’s a lot more than just pocket change. But here’s the thing: only one fifth of our contribution forms sitewide that received contributions had our remarketing feature enabled. That means 80% of ActBlue forms are losing out on a lot of extra contributions! If you haven’t turned on remarketing yet, here’s a reminder about how to do it.

Being knowledgeable about where your donors are based is helpful because it can lead to new tests where you target different folks at different times. Take a look at this chart below to see where ActBlue’s sitewide donor base is located, and when folks from different parts of the country give most: 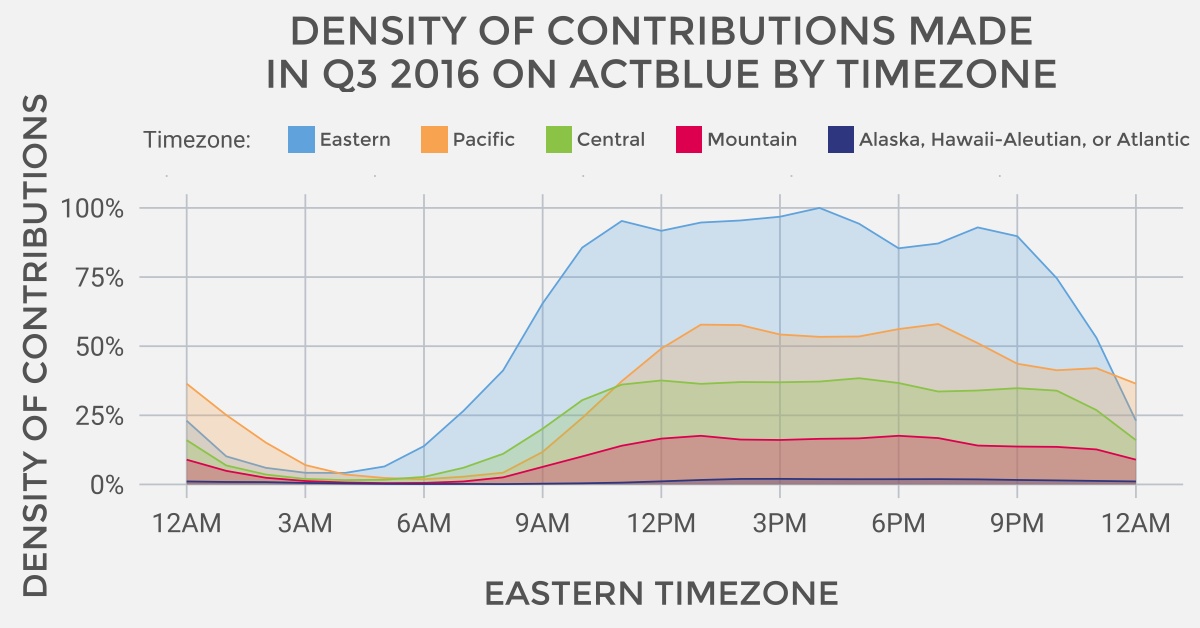 It was an incredible quarter for ActBlue, and we’re so excited to have our biggest election year yet. That’s why we want to thank our donors! Without them, there’s no way we’d be on track to handle more than $700M this election cycle. We also couldn’t be more proud to be lowering the barrier for participation across the board. Our tools give folks who otherwise wouldn’t be able to get involved in the political process the opportunity to make real change happen.

Of course, we’re also thrilled that the more new folks start using our tools, the more fundraising records we can break. After all, let’s remember our prediction back in Q1 2016: we said we might process over half a billion dollars in small-dollar contributions this election cycle: looks like we’ve got some ceilings to smash both in terms of our own record, and in the White House.