Our numbers for May are in, and it was another huge month for small-dollar donor engagement. There’s been an incredible increase in May’s fundraising totals cycle over cycle — we processed three times the amount of money in May of 2017 than in May of 2015. Similarly, more than double the number of groups raised money on ActBlue in May of 2017 than during the same month of the last election cycle. Collectively, more than 3,200 total groups raised more than $48M in May alone. Small-dollar donors are not giving up on making their voices heard, and new groups and organizers are getting involved in the progressive movement.

When the AHCA bill went to a vote in the House during the first week of May, groups mobilized quickly as small-dollar donors made it clear they were ready to contribute and fight back. Here at ActBlue, we had all hands on deck and set up hundreds of Democratic nominee funds, where grassroots donors contributed millions of dollars in the days surrounding the vote. Check out the graph below, where you can clearly see the huge spike in dollars on May 4th and 5th, when donors were making their opposition to Trumpcare heard loud and clear.

Keep reading below the chart for a breakdown of all the highlights for May: 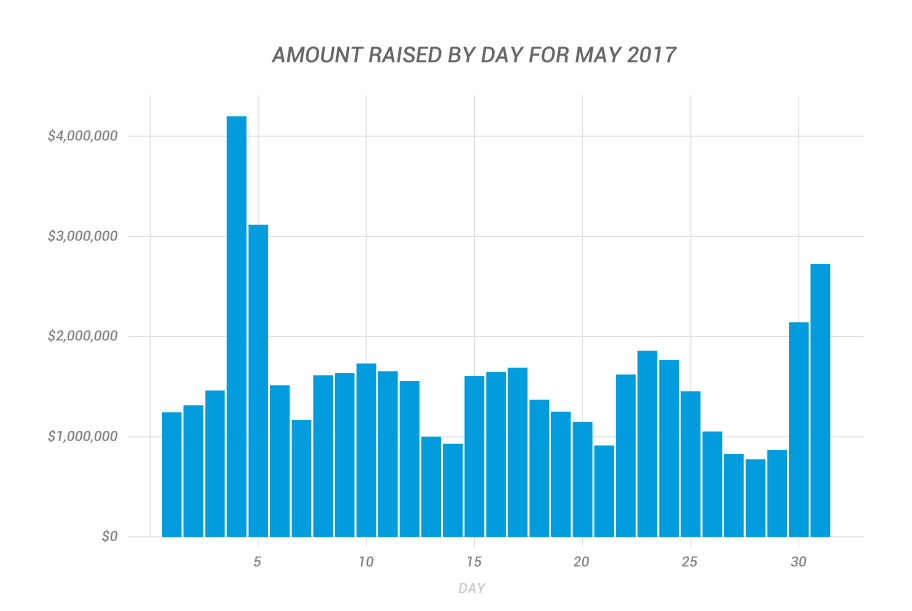 We’ve seen a steady stream of new, dedicated donors coming into the fold so far in 2017, and this past month was no different. More than 98k new donors saved their payment information with ActBlue Express in May. Those supporters are able to give to any of the thousands of groups using ActBlue with a single click.

Recurring contributions are one of the biggest ways donors show their ongoing support for the campaigns and causes they care about. Rather than giving one up-front contribution, they’re able to chip in a small amount over the course of multiple months. The amount of recurring money groups are raising across ActBlue has grown at an incredible pace over the last few election cycles. In the graph below, we break down daily recurring totals cycle to cycle. Recurring totals tended to be pretty stable from day to day in May. That’s great for campaigns and organizations relying on their recurring fundraising as a way to budget and plan ahead, and indicates that donors are remaining committed to the causes and campaigns they’re passionate about. 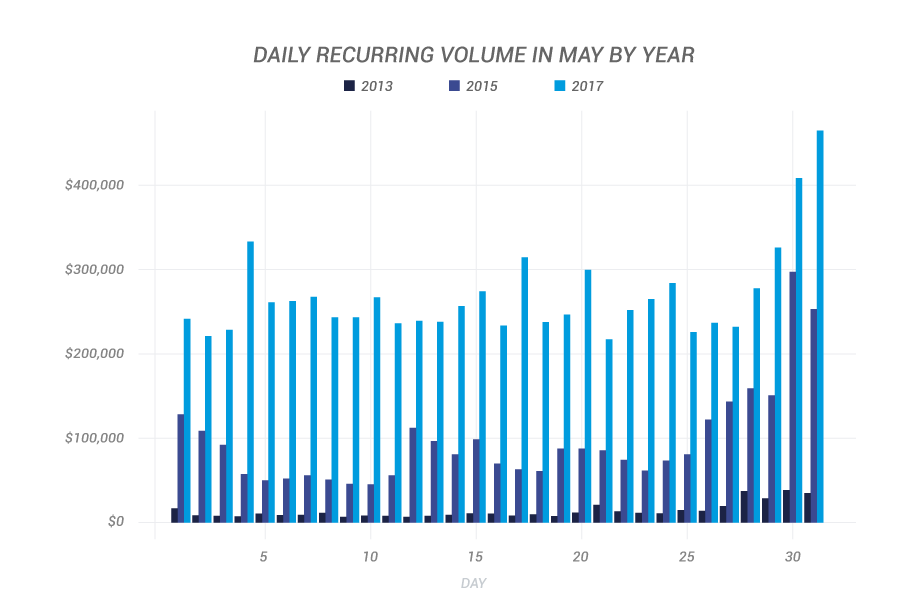 Our customer service team handled over 890 email conversations a day during the month of May. With so many new donors coming on board to support the groups fundraising on ActBlue, we’ve recently brought even more customer service representatives on to our team. They’re available around the clock to answer questions from donors, campaigns, and organizations alike, and make sure it’s easy for them to use ActBlue to make a difference.

If you’ve got any questions or comments about our May breakdown, drop us a line at info@actblue.com.