Q2 2017: More campaigns and organizations raising than ever before

Back in April, we published some record-breaking numbers for Q1. It was a powerful sign that the resistance was fighting back against Trump. But it wasn’t a one-off moment. In Q2, as we got farther away from Trump’s inauguration and marches across the country, which were rallying points for many people, those record-breaking numbers only got bigger. It’s a sign that the resistance isn’t slowing down, but deepening and organizing to win. There were some big moments during Q2 — special elections and the House healthcare vote — but those were only small parts of the story. Thousands of groups took action (in fact, more campaigns and organizations raised on ActBlue than in any quarter before!), and more supporters chipped in to support the candidates and causes they believe in.

We handled 4,654,994 small-dollar contributions and helped campaigns and organizations bring in $137.4 million, which is nearly three times our Q2 2015 total (the best year for comparison, given that it was the first year of the most recent election cycle). It’s also larger than our Q2 2016 total ($133 million), and that was during the height of the presidential primary! 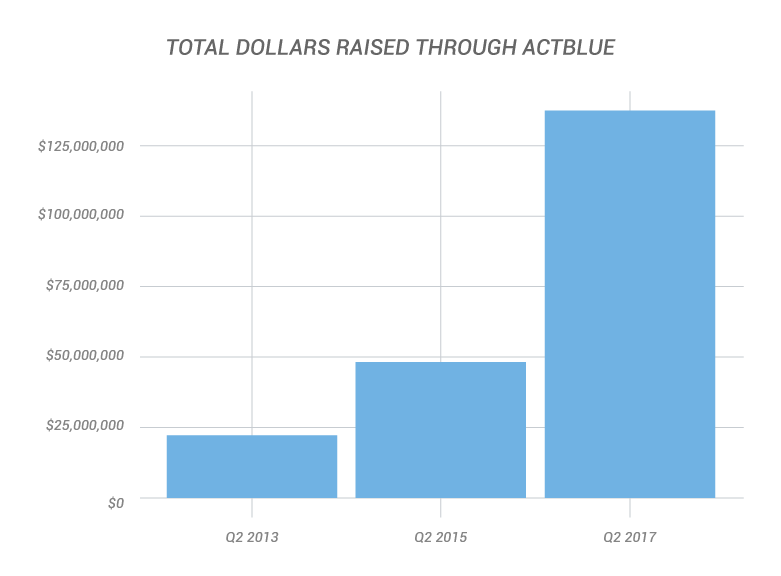 One of the biggest reasons for this huge growth is the increase in the number of campaigns and organizations that are fighting back and using our tools to engage with supporters and fundraise. We helped 4,293 groups raise money in Q2 — that’s the most ever in a single quarter, and it by far exceeds the number of groups that would normally be raising at this time during an election cycle. 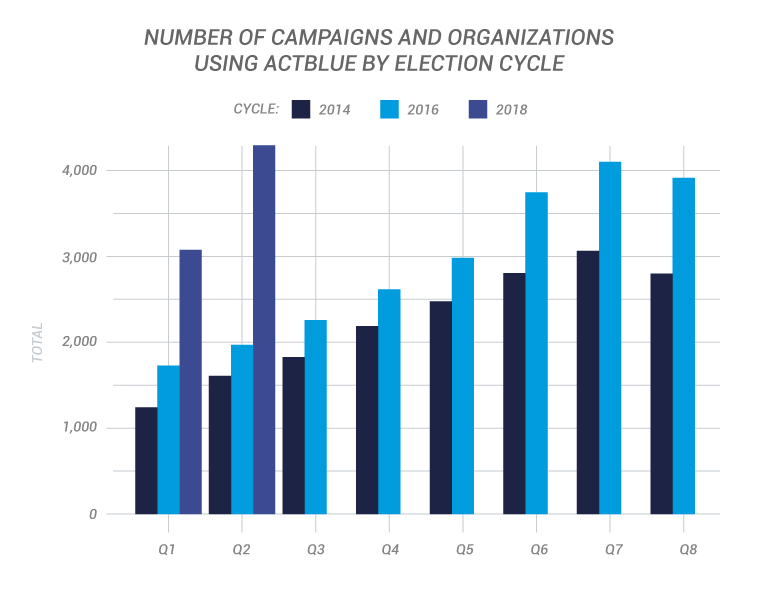 Of those groups, 1,374 raised their very first dollar on ActBlue in Q2 (909 campaigns and 465 organizations). Oftentimes candidates wouldn’t have declared at this point in the cycle, especially if they’re running for local office, but people are fired up right now. And that early money is going to help them build powerful campaigns down the line.

The last quarter wasn’t successful because of any one of these groups, or because of any handful of big days. If you look at the fundraising totals of the biggest, smallest, and average days in the quarter as compared to past years, you start to see just how steady the fundraising was from day to day, and how so many groups, from small organizations to high-profile campaigns, have come alive and have worked hard to build people-powered movements.

We certainly had some big days in Q2, but that wasn’t what ultimately led to a record-breaking quarter. As you can see below, the smallest day in Q2 2017 was 43% bigger than the average day in Q2 2015. 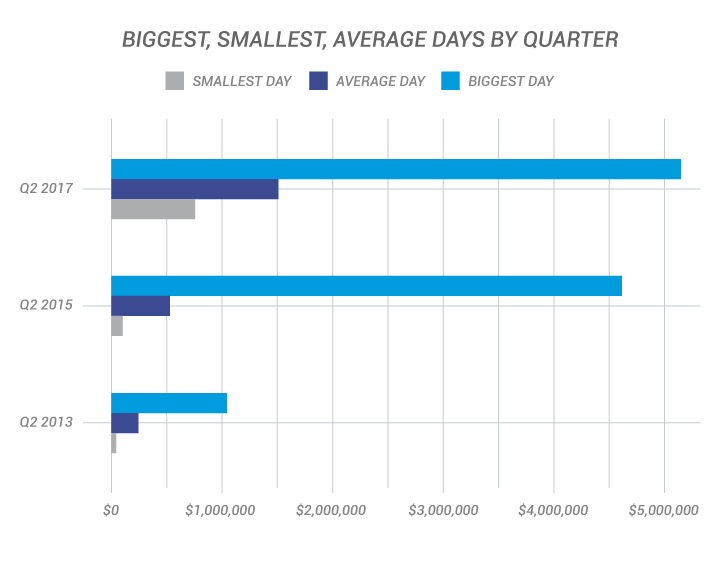 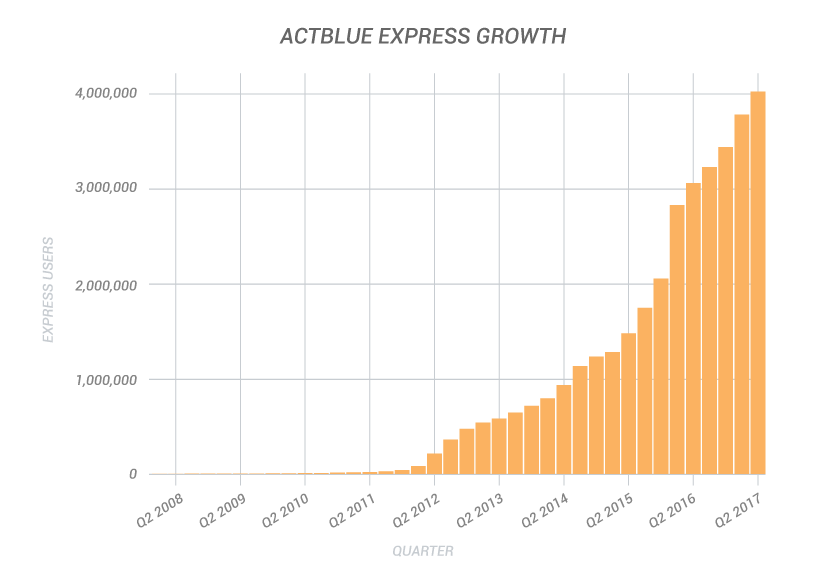 Recurring contributions remained strong this past quarter, accounting for 41.6% of all contributions (that includes recurrences of pledges that were initiated before Q2 2017). Recurring programs continue to help campaigns and organizations build sustainable operations and plan for the future, and they allow donors to give a small contribution each month and have a big impact on the causes they support.

Mobile contributions account for nearly half of all contributions made via ActBlue. We’ve worked over the last few years to ensure that the donation process is as smooth as possible for supporters, and that campaigns and organizations have access to the most advanced mobile technology, whether they’re a presidential campaign or a small upstart nonprofit. Apple Pay — one of our latest advancements for mobile — accounted for 6.2% of all mobile donations this past quarter, and helped bring in $3.2 million. We’ve been working to roll Apple Pay® out to as many campaigns and organizations as possible since October, and we’re very close to being able to make it available to everyone, from local candidates to national nonprofits.

While 2018 and 2020 are still a ways off, and there is much more work to be done, it’s been inspiring to see so many people take their anger and frustration and turn it into action. Across the country, people are jumping into the fray and running for office, starting new organizations, and chipping in as a way of fighting back.

We’d love to hear how you’ve been using ActBlue’s tools to fight back. Let us know at info@actblue.com.