Q3 2017: Unprecedented engagement across the board

2017 has been a huge year for fundraising on the left as more Americans make fighting back against Trump and the GOP part of their daily lives. We knew there was a lot of momentum going into Q3 but wondered if the summer would slow anyone down. The numbers show the resistance is still going strong. We helped raise $108,108,700 for Democratic campaigns, progressive organizations, and nonprofits doing hurricane relief work — nearly double what we helped raise during the same period in the 2016 election cycle — from 3,178,688 contributions.

Organizations large and small worked tirelessly to respond to Trump’s DACA repeal and congressional Republicans’ attempts to replace the ACA, and an historic number of folks decided to run for office. All of this work was powered by small-dollar donors giving to the causes and candidates they believe in. As a result, a record-breaking 5,225 groups raised money on ActBlue in Q3 — more than ever before in our history.

This surge of activity helped break another record. By the end of Q3, campaigns and organizations using our tools had raised over $350 million since the beginning of the calendar year, despite the fact that midterms are still more than a year away. The only other time we’ve handled $350 million in an election cycle was in the most recent election. We hit that mark in March 2016, 13 months into a very active presidential race. Donors are participating at unprecedented levels, and candidates are laying the groundwork they need to run strong campaigns up and down the ticket in 2018 and beyond.

The number of unique groups using our platform more than doubled from Q3 2015 and even increased by 21.7% from Q2 of this year. Specifically, more candidates are jumping into the ring earlier than ever before and focusing on raising money from small-dollar donors to fuel their campaigns. We’ve seen growth at all levels of office this quarter:

● There were 658 local candidates and committees raising money on our platform in Q3, which is 4.6 times higher than Q3 in 2013 and more than double our Q3 2015 total. Our team has been busy clearing local jurisdictions so that more candidates for offices like city council and school board can run people-powered campaigns and make a difference in their communities right now.
● 1,026 candidates for governor, state house, and state senate used our tools this quarter. That’s nearly double the amount of candidates compared to this time in 2015.
● A total of 804 candidates for federal House and Senate seats were raising money from small-dollar donors in Q3, three times as many as in the last two election cycles.

And progress isn’t limited to elections: 293 (c)4 advocacy organizations raised money this quarter. The following graph shows just how many more groups were raising in Q3 than at the same point in the last few election cycles. 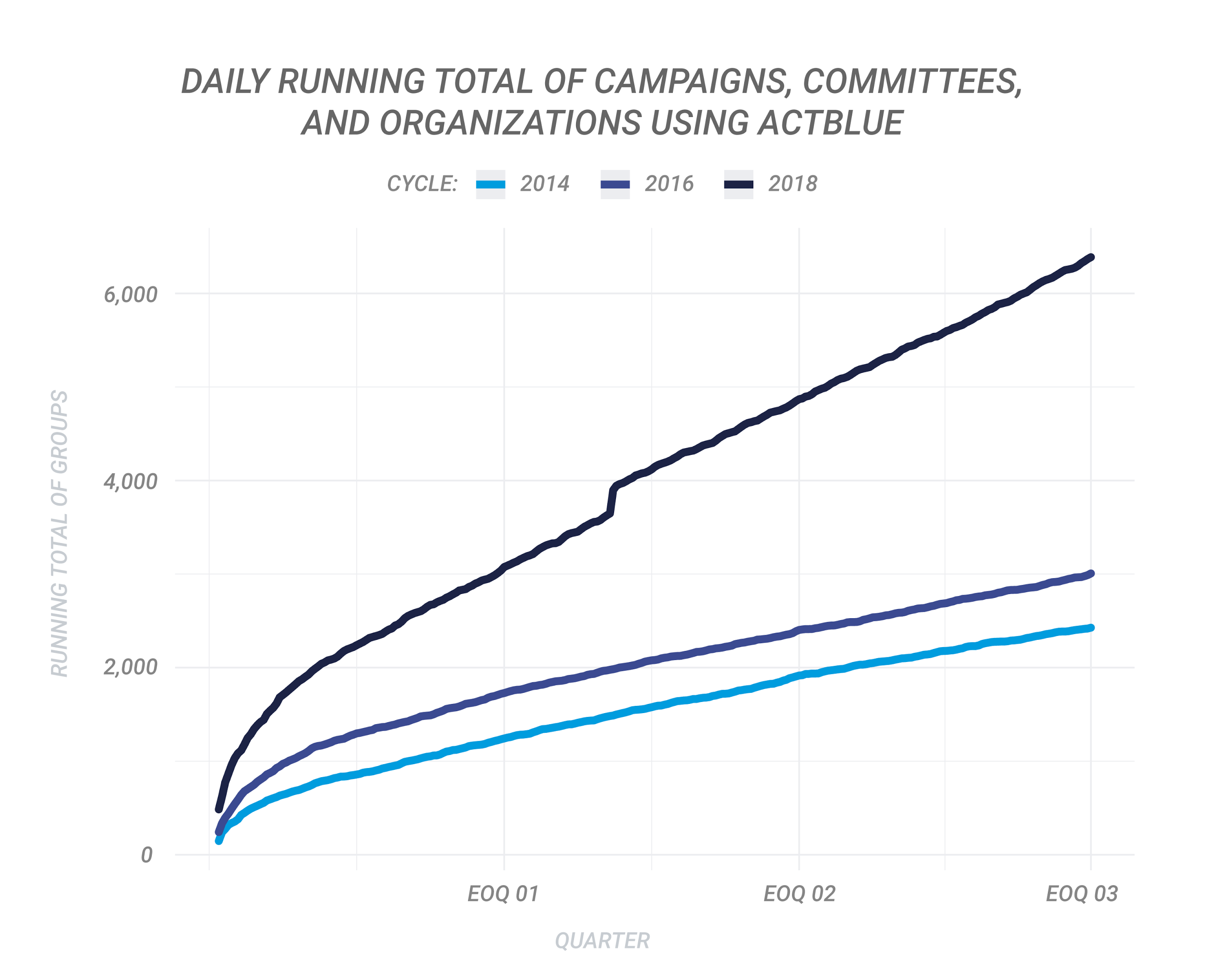 This trajectory shows us that people are extremely engaged, and at ActBlue we’re working hard to make sure they have the tools they need to succeed. Our integration with Account Updater, which we offer at no additional cost, is one of those tools. If a donor has a recurring contribution on ActBlue and loses their card or their credit card company issues them a new one, this feature updates their card information automatically.

September was a particularly good month for Account Updater, with 17.4% of recurring contributions being updated with a new card. (For comparison, we usually update around 1% of recurring contributions per month.) Updates in September alone ensured that $859,466 worth of small-dollar contributions made it to the campaigns and organizations donors wanted to support, at no extra cost to those groups or donors. In the graph below, you can see the total amount of money saved by Account Updater since we started using the integration. 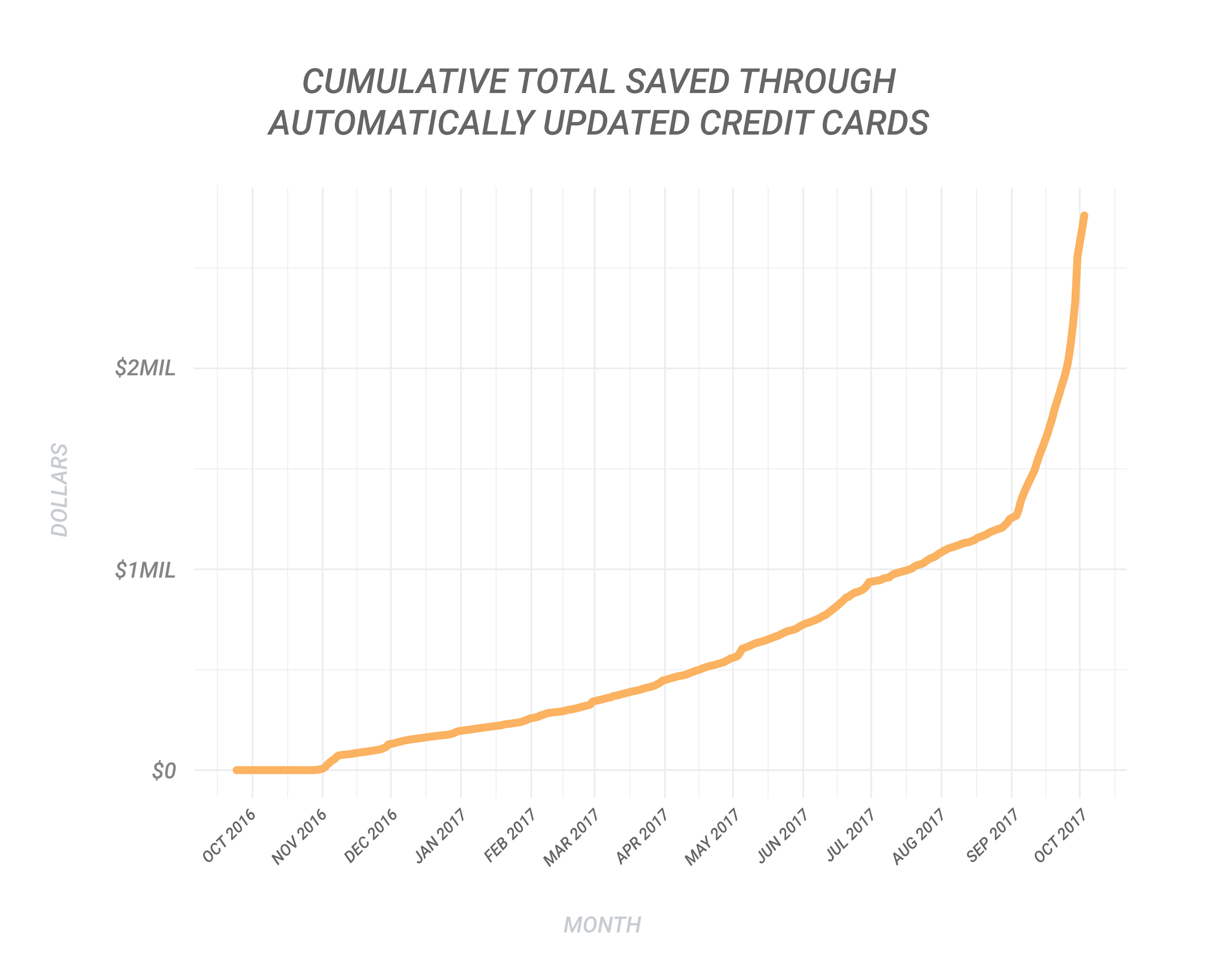 Q3 was full of difficult days for our nation. From natural disasters to crises created by Trump and the GOP, small-dollar donors channeled their sorrow and disgust into action. The graph below shows our daily fundraising totals for the quarter, along with the biggest news stories of the last three months.

The biggest days of the quarter were the end of each month and the end-of-quarter deadline, which are traditionally the most important fundraising days of the year. But the health care fight in July also led to an uptick in support, as did the hurricanes that hit at the end of August and September. Supporters who had previously given via ActBlue forms were able to quickly give to disaster relief organizations on AB Charities through Tandem forms, which allow donors to split one contribution between several groups. We saw a steady bump in traffic in the days following those natural disasters as more and more news came out about relief efforts. Overall, 31,448 small-dollar donors gave to charities through Tandem forms and 274 charities raised money on AB Charities in Q3. 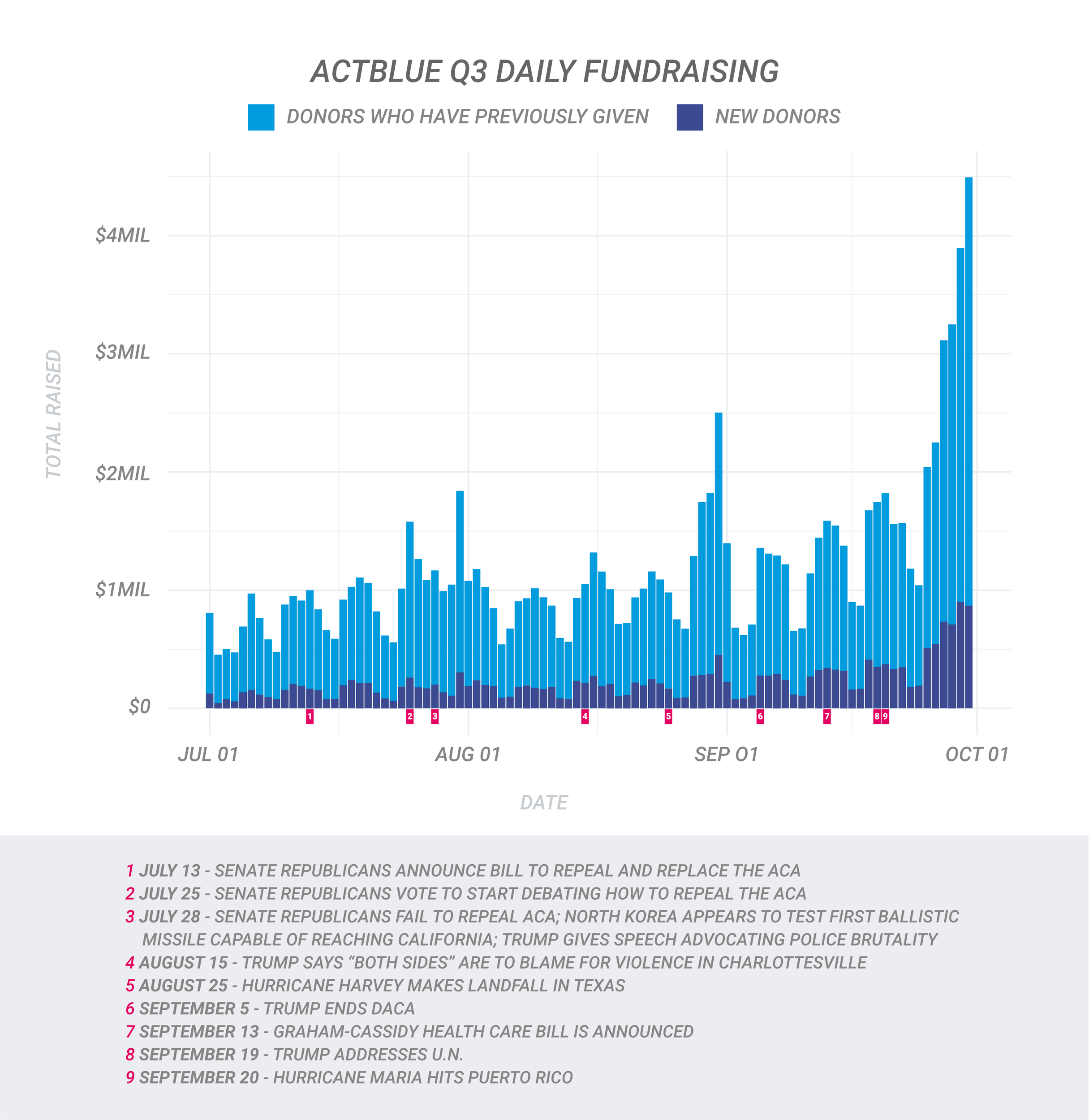 Making giving as frictionless as possible is crucial to the success of fundraising campaigns. ActBlue Express enables more than 4 million small-dollar donors to give to any group on our platform with a single click, and its importance is reflected in this quarter’s numbers. ActBlue Express users raised $64,516,271 in Q3, almost double their haul in 2015. There were also 189,331 donors who signed up for ActBlue Express this quarter.

Recurring contributions help campaigns and organizations plan for the long haul. This quarter, 46.3% of total contributions came from recurring donations. After the devastating hurricane season, we were heartened to see people ask for recurring donations to support relief efforts. Donors often want to give in those moments, and a recurring ask can create a more sustainable recovery effort.

Q3 was a true success thanks to the emerging deep bench of Democratic candidates and passionate organizers around the country. We’re thrilled to help so many people-powered movements fundraise online. And we expect Q4 to bring even more small-dollar donors into the fold, with campaigns continuing to build for 2018, state elections in Virginia in November, and Giving Tuesday just a few weeks later. If you have any questions about our tools or need advice on how to use them, contact us at info@actblue.com.