We continued to see incredible growth this November. More groups used our tools than ever before, and small-dollar donors raised 2.7 times more money than in November 2015. Some of this growth even outpaced historical patterns: Supporters raised more money in November than they did in October for the first time since 2011.

Folks had many reasons to be motivated, from the major Democratic gains in state and local elections on November 7 to the special Senate election in Alabama this week. The month also ended with one of the biggest fundraising days of the year: Giving Tuesday, the charitable response to Black Friday.

Check out all the highlights from November below:

A record-breaking 4,771 campaigns and organizations raised money on our platform last month. A lot of this growth came from the unprecedented number of people choosing to run for office.
Additionally, small-dollar donors made nearly 100,000 more contributions in November than they did in October 2017, even though October benefitted from final Election Day pushes.

On Giving Tuesday, we saw clear spikes in contributions at certain hours. The chart below shows the number of new contributions to both 501(c)3s and 501(c)4s on the big day by hour (Eastern Standard Time). Donations started off early at 7 a.m. and spiked at 3 p.m., but the busiest hours by far were after the end of the traditional working day. There was a massive bump at 7 p.m. and another at 11 p.m. as supporters tried to get their donations in before the deadline. 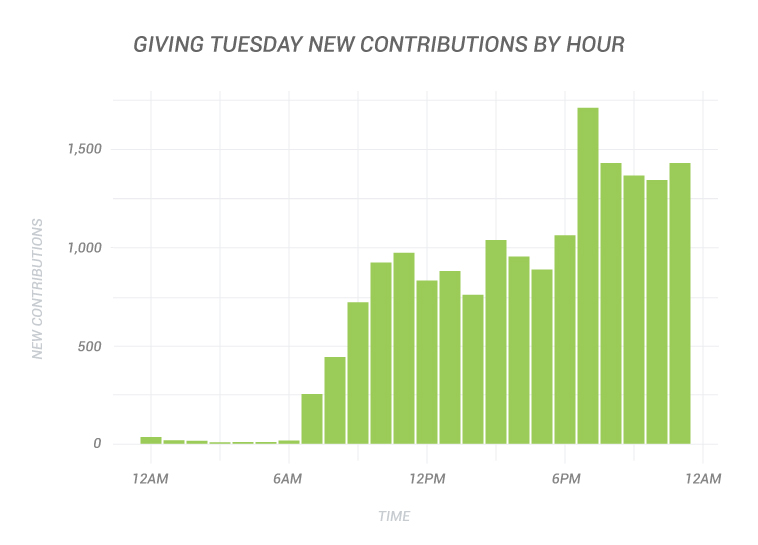 Our automatically mobile-optimized contribution forms help empower grassroots donors during big moments. When a candidate or organization launches a rapid response campaign, mobile-optimized forms allow donors to give quickly, no matter what device they’re using. With 40.7% of all contributions made via mobile last month, groups that aren’t thinking with a mobile-first mindset will miss out on a huge number of contributions, especially during breaking news.

This November, 21.4% of all contributions were recurring. As we’re not even a full year into Trump’s presidency, recurring donations are more important than ever so that the groups opposing his policies have the funds they need to stay in the fight.

Our Customer Service team received over 22,000 emails in November — that’s more emails than there are people in Concord, Massachusetts, where the Revolutionary War started!

December is already proving to be busy, with important fights over government spending, DACA recipients, and children’s health care. And nonprofits are in the thick of their busiest season of the year. We expect to be busy right through New Year’s Eve. If you want help perfecting your end-of-year fundraising strategy or planning for next year, or if you have questions about this post, get in touch with us at info@actblue.com.