February was the last month before primary season kicked off, and small-dollar donors took that to heart: They helped Democratic campaigns and other groups on the left raise $59,511,643 using ActBlue. That total beats the previous ActBlue record for February from 2016 by over $1 million. Additionally, the number of unique groups using our tools hit a new high once again: 6,039 candidates, advocacy organizations, and nonprofits! These records are even more impressive because February 2016 was part of a presidential cycle and was also one day longer than last month because it was part of a leap year!

Check out all of the highlights from February below:

Not only are more donors becoming engaged, more folks are jumping into the ring and running people-powered campaigns. We’re only two months into 2018, and over 1,000 candidates have raised their first dollar for a new (and in most cases, first) campaign. At the end of February in 2014 and 2016, there were fewer than 375 candidates who were raising for a new campaign on ActBlue. 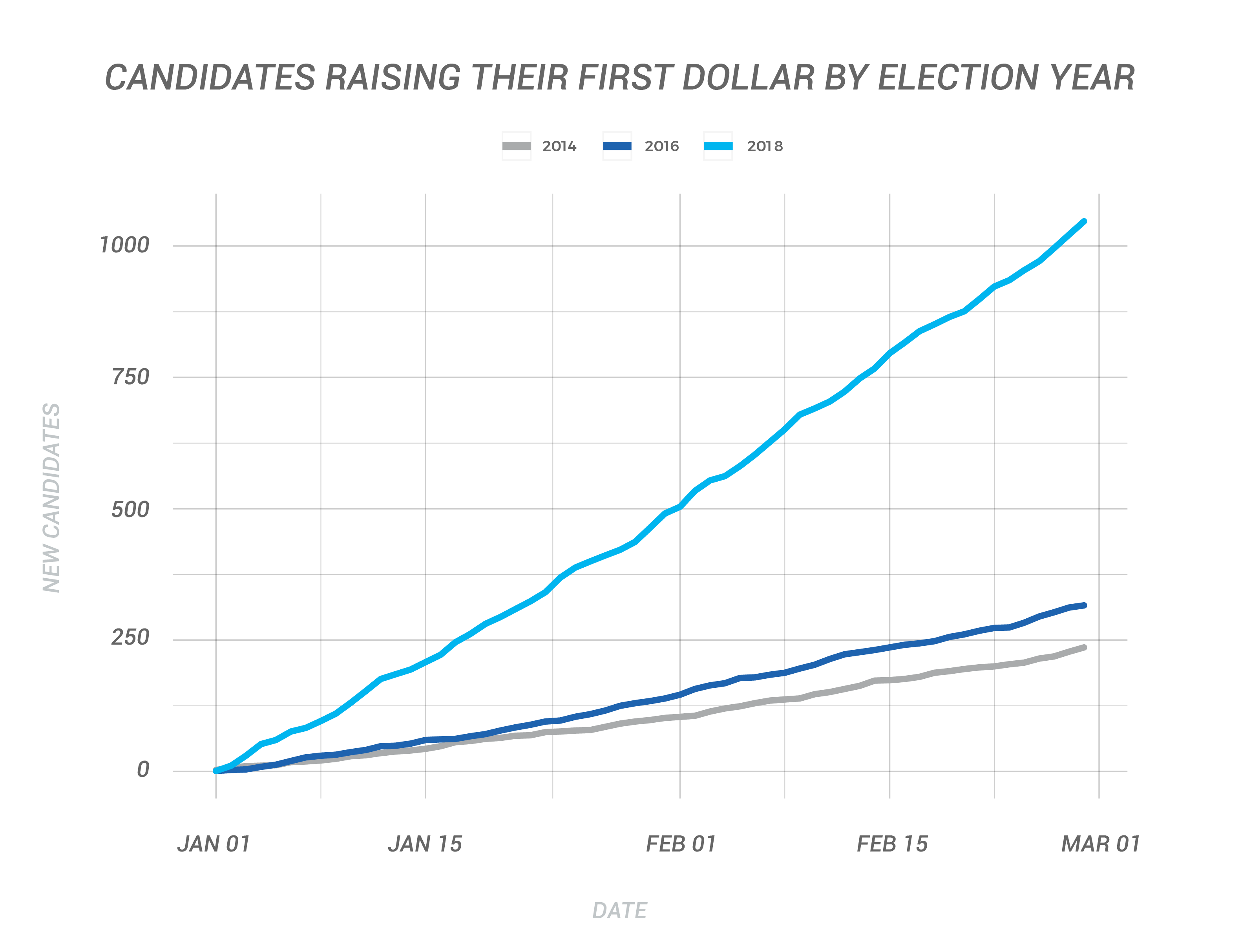 115,471 new users signed up for ActBlue Express last month and can now give to any group that uses ActBlue with a single click. February 2018 is only the tenth month in ActBlue history to have over 100,000 people sign up for ActBlue Express, and it’s the second-biggest month in this cycle (only January 2017 is bigger)!

All ActBlue contribution forms are automatically mobile-optimized so small-dollar donors can quickly and easily give on their phones or tablets. Last month, 43% of all donations on ActBlue were made via mobile. As primary season begins in earnest, it’s more important than ever for campaigns to be mobile-friendly so they don’t miss out on contributions. 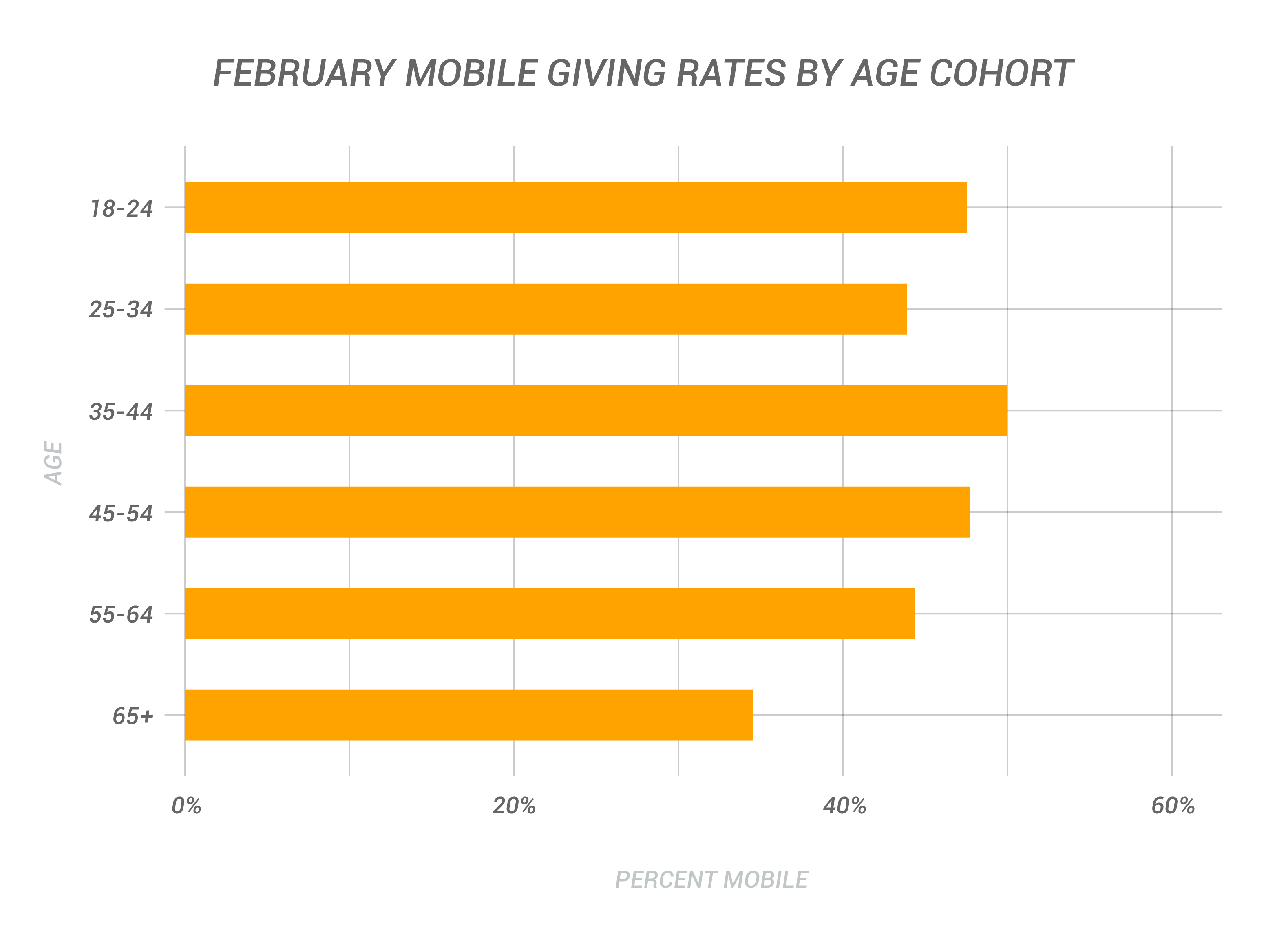 When supporters make a recurring contribution, they enable that candidate or organization to build a roadmap to Election Day. 20.3% of February’s total volume came from recurring contributions, up an impressive 5.5% from February 2016. Now that it’s an election year, recurring donations will play a huge role powering Democrats to victory up and down the ballot.

Because it was a short month, we had to process the recurring contributions that typically run on the 29th, 30th, and 31st on the 28th. That meant 43.9% of our entire volume for February 28th was recurring! Our tech team is always strengthening our platform so it can handle spikes in volume like this, which you can clearly see in the chart below. 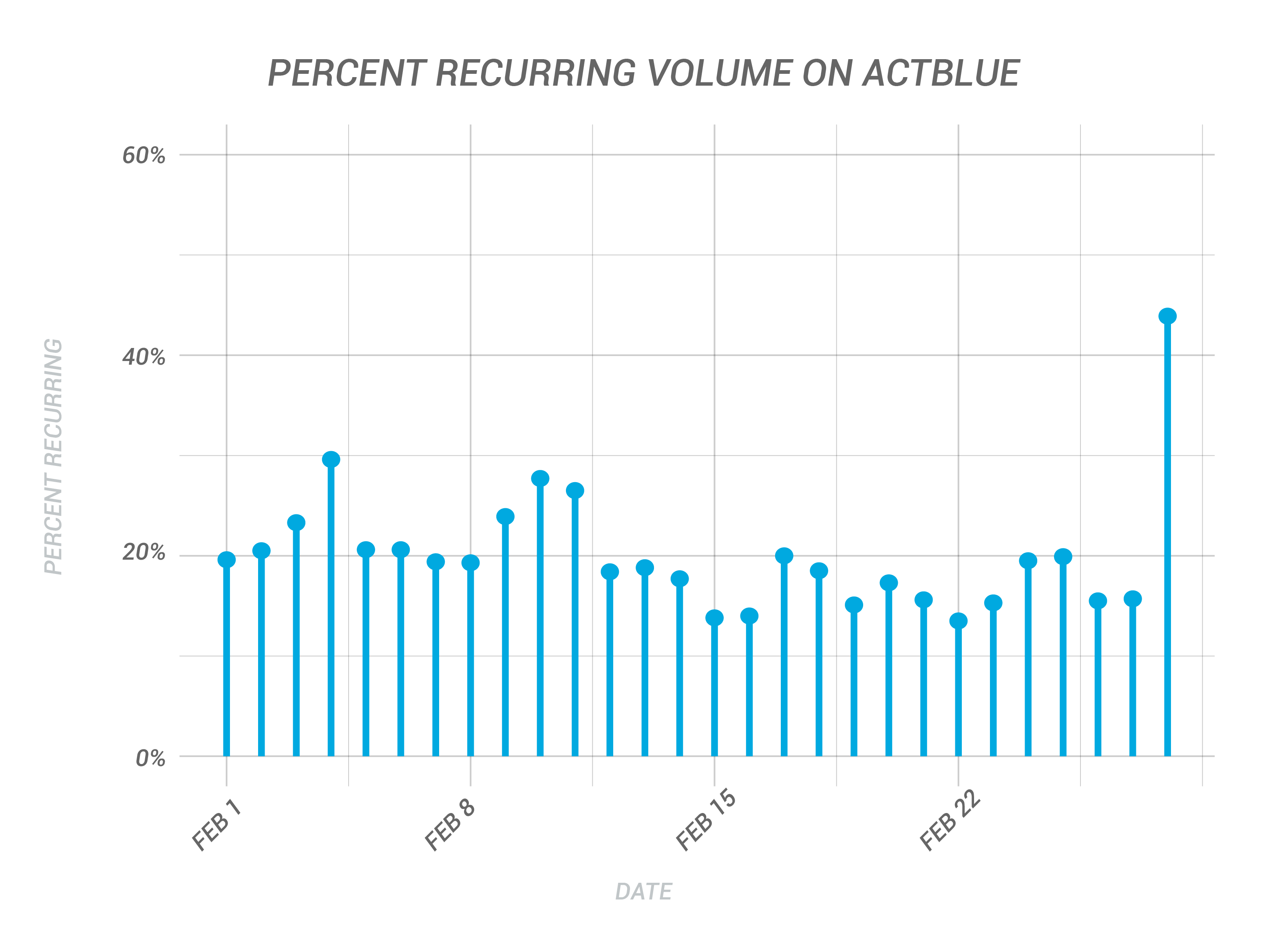 We know that more folks are going to chip in as this election year ramps up, so we’re adding more experts to our Customer Service Team. They’re available 24/7 so donors can always get the answers and help they need.

Small-dollar donors are gearing up for a potentially historic election year. If they continue to outpace totals from the 2016 cycle, there’s no limit to what this movement can achieve in November! If you want to fundraise for your favorite campaign or cause, or if you have questions about this post, contact us at info@actblue.com.