Since Trump’s election, small-dollar donors have been fired up and actively engaged in trying to change our country’s future. We’ve reported back every quarter on how grassroots supporters have been besting past election cycles and breaking records, but this past quarter was truly astounding. Thanks to small-dollar donors, Q1 2018 was our biggest quarter ever (beating out every quarter of the 2016 election!), with a total of $180,737,948 raised. Additionally, we’ve already raised $702,744,083 in the 2017-2018 cycle and will be hitting $750 million in a matter of weeks. For comparison, our total for the entire 2015-2016 cycle was $746 million.

There were also a record-breaking number of campaigns and organizations raising on ActBlue in Q1 2018 — 7,838 in total. And there have now been over 10,000 groups who have raised money through our platform during the 2017-2018 election cycle, another sign of how truly massive the resistance movement has become. Below, you can see the extraordinary growth in groups using our tools during this cycle. This is an increasingly diverse set of groups that includes national advocacy organizations and local nonprofits in addition to campaigns of all sizes. That means supporters will have plenty of places to direct their energy after election season ends. We’re experiencing a historic moment in the small-dollar donor movement, and it’s not even a presidential election cycle! 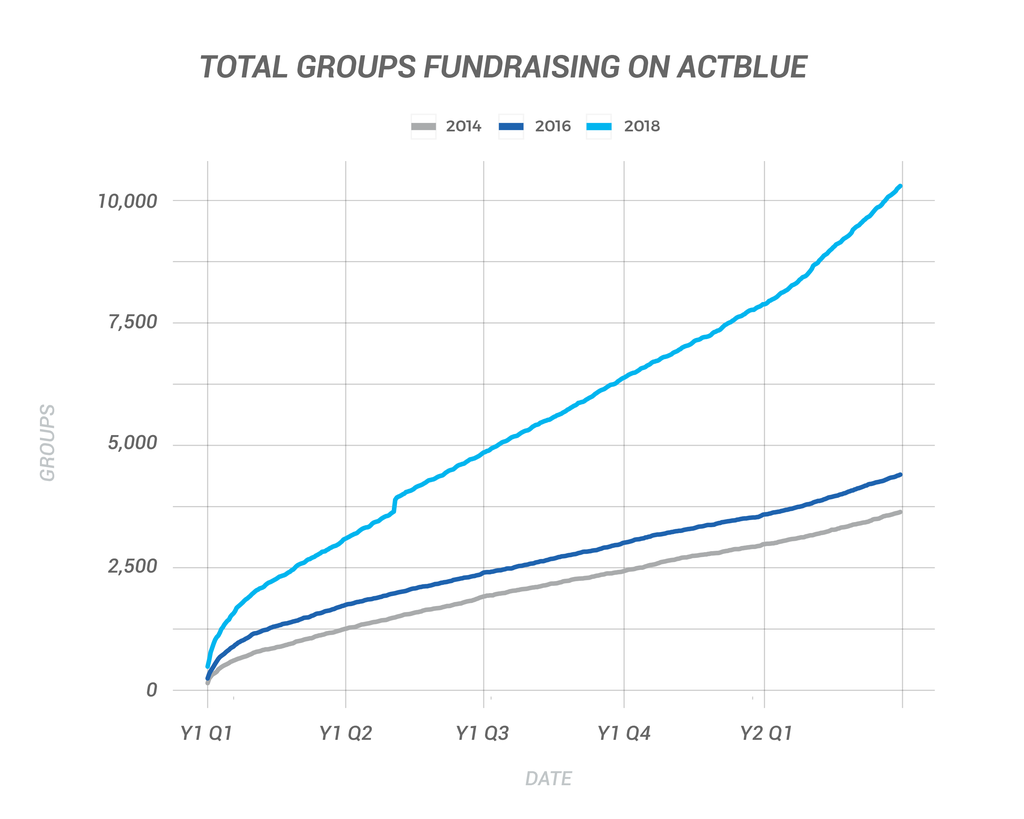 Grassroots donors also propelled us to another milestone this quarter: On January 4, we officially hit $2 billion raised in the lifetime of our platform. We only hit the $1 billion mark in March 2016, in the midst of a spirited presidential primary. An unparalleled amount of organizing from concerned citizens and activists helped us double that in just under two years!

Check out all of the highlights from Q1 and new cycle-to-date comparisons below:

Small-dollar donors made 4,659,660 contributions on ActBlue this quarter, and they had many reasons to give. In addition to some special elections and the start of primary season, folks were fired up about government shutdowns, the ongoing fight for DACA, and organizing for gun control.

We got to our record total of $181 million raised this quarter thanks to remarkably consistent daily totals. In Q1, there were a record-setting 38 days when candidates and organizations raised more than $2 million — including every weekday in March! In the chart below, you can see how steady donations were, especially during the work week. 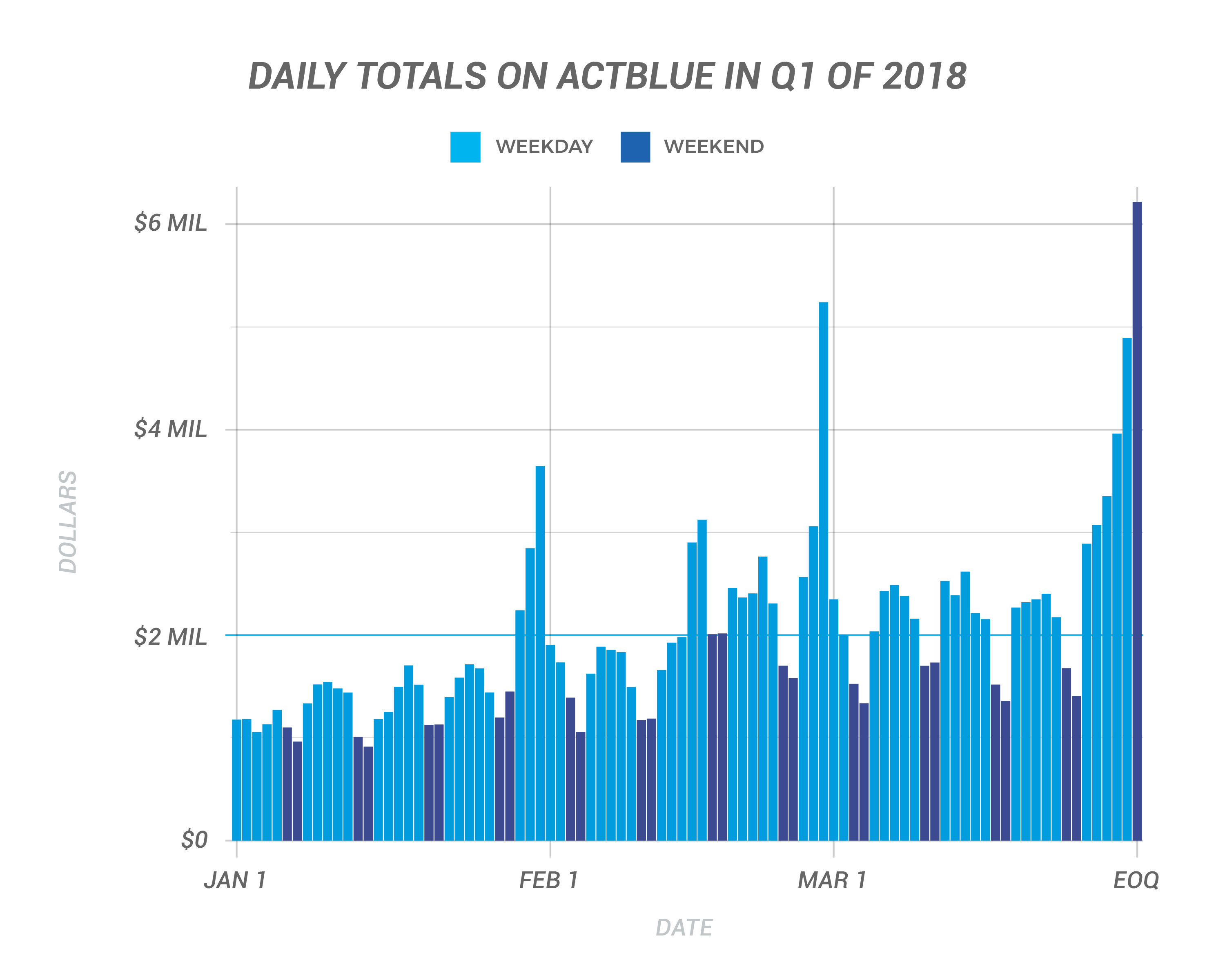 There’s so much unprecedented grassroots engagement right now that we decided to compare the 2018 election cycle so far to the same timeframe in past cycles. Across all metrics, it’s clear that Democrats have more grassroots support going into this election year than ever before.

In the graph below, we break down fundraising totals on ActBlue for these election cycles by quarter. With so many small-dollar donations coming so early in the 2018 cycle, Democrats will be able to keep up with Republicans bankrolled by mega-donors right up to Election Day. 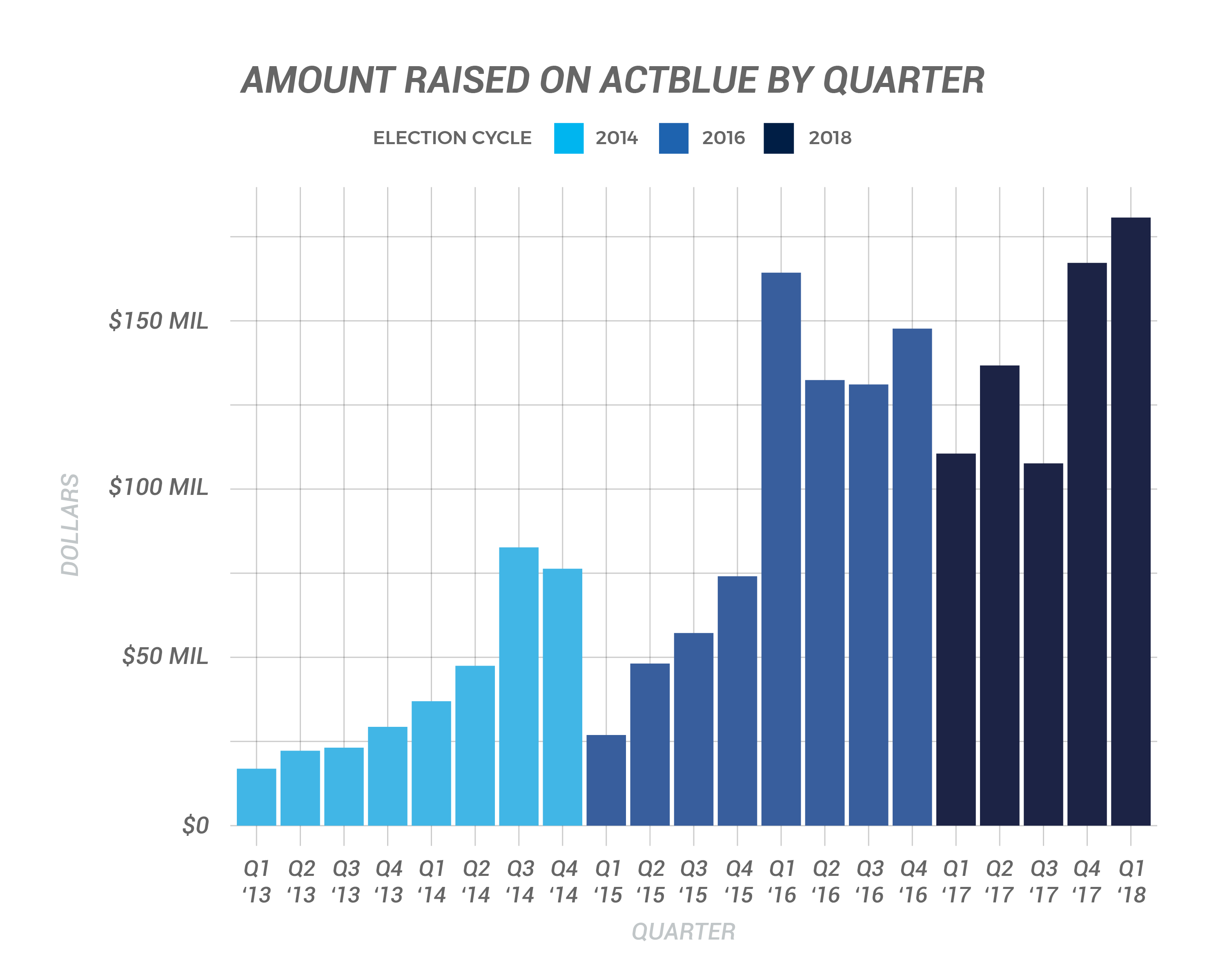 In January we officially hit 4.5 million ActBlue Express users, and by the end of March we had over 4.7 million! 290,744 people saved their payment information with us this quarter and can now give to anyone on our platform with a single click. In a real show of commitment, 43.4 percent of the ActBlue Express donors who gave in Q1 made more than one contribution, and 38.7 percent gave to more than one group! We’re looking forward to hitting 5 million ActBlue Express users next quarter, in time for the heat of election season.

Twenty percent of Q1’s total volume came from recurring contributions. Now that we’re only seven months away from Election Day, recurring contributions are more important than ever for Democrats running for office. When donors chip in monthly contributions, campaigns can budget ahead of time for ads, events, GOTV efforts, and more so they’re not out of cash at crunch time.

We added six (!!) new customer service experts to our team this quarter. With a record number of first-timers running for office and new folks supporting them as grassroots donors, we want to make sure we can answer any and all questions.

This quarter, small-dollar donors set Democrats up for success. We know the midterms won’t be easy, but with so many records already being crushed, the left has the energy and the resources to win in November. If you want to get your campaign on ActBlue (it’s never too late!) or need help fundraising for your favorite cause, or if you have questions about this post, contact us at info@actblue.com.