In a quarter filled with exhilarating highs and devastating lows for our democracy, small-dollar donors were the one constant we could count on. Not only did donors break fundraising records on ActBlue once again (more on that later), hundreds of thousands of people were moved to give for the first time this quarter. Many were activated by the Trump administration’s horrific separation of families at the border, as well as the new opportunity to vote for primary candidates who looked like them and embraced small-dollar donors over super PAC money.

This increased participation is reflected in our latest cycle-to-date numbers: Small-dollar donors have now raised over $900 million this election cycle and are on track to hit $1 billion this summer! Additionally, the number of unique groups using our fundraising tools this cycle is nearly double the number that used us in the entire 2016 election cycle! Grassroots donors are truly uniting behind Democratic candidates and successfully leveling a playing field traditionally stacked by conservative mega-donors. 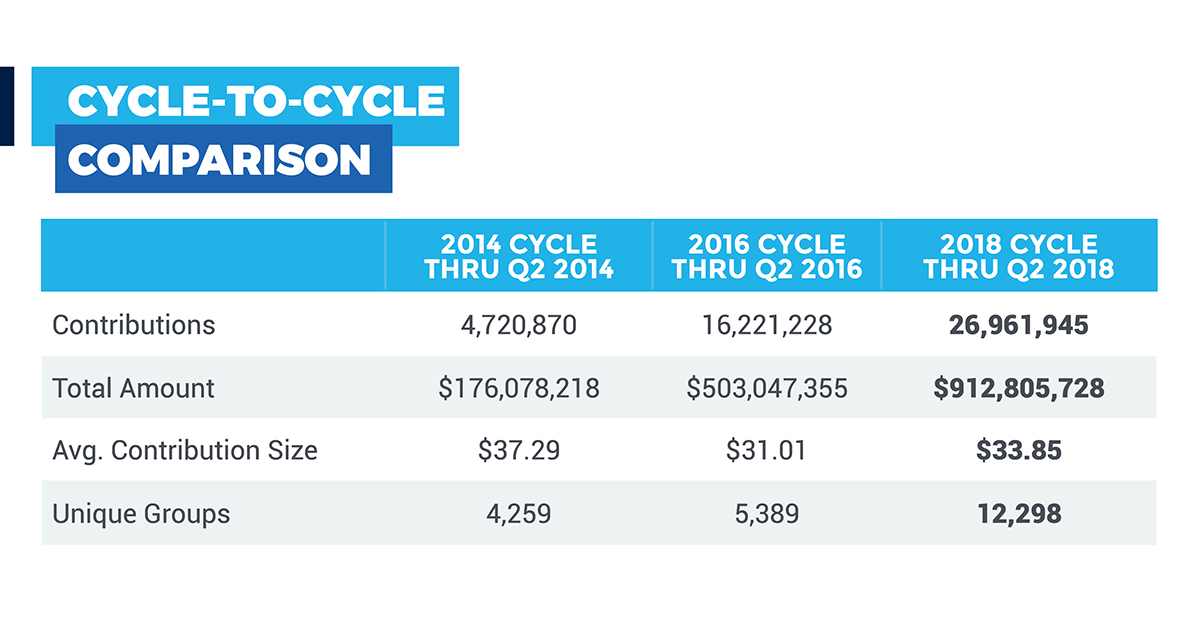 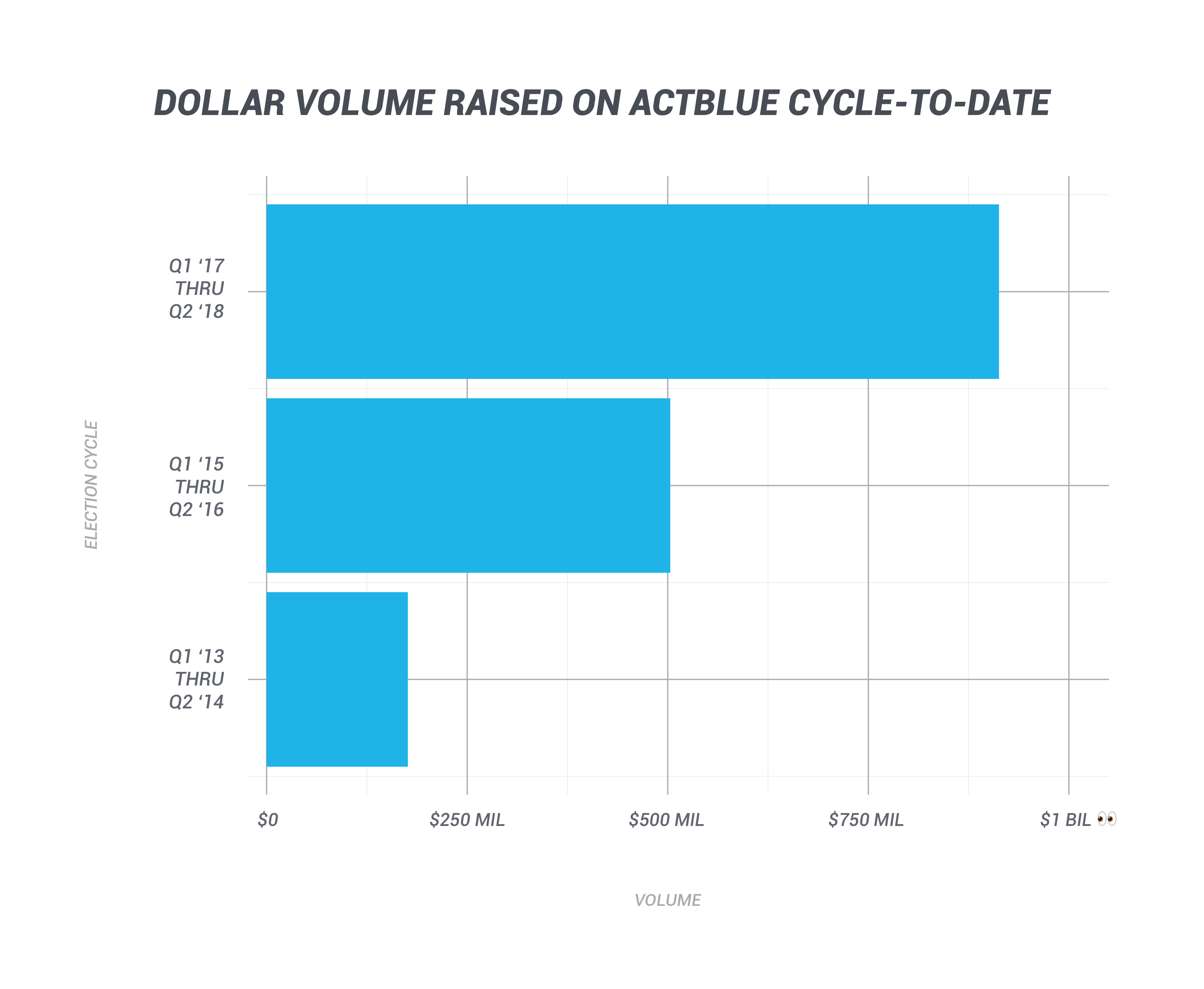 Small-dollar donors aren’t just breaking cycle records — this was also the biggest quarter ever on ActBlue in terms of dollar volume ($210,747,320), and it includes our biggest dollar day ever (June 30 — $9,373,597). On top of all of that, we also officially crossed 5 million ActBlue Express users! Keep reading to see everything grassroots donors achieved this quarter.

With so many brand-new grassroots donors getting off the sidelines and jumping in to help more candidates and organizations than ever before, we once again broke the record for the number of unique groups using our tools in a single quarter: 9,070 campaigns and organizations. Q2 was also our second-biggest quarter ever for number of contributions. Small-dollar donors gave 5,177,216 contributions, nearly matching the current record of 5,615,070 from Q1 2016, which was in the midst of a heated presidential primary! This is yet another example of the participation and activism we’re seeing build as we near November.

Many of the new donors in Q2 were motivated to give to charities fighting for parents and children who were separated at the border. When the crisis began, activists and elected officials used our Tandem Fundraising feature to build contribution forms that listed multiple nonprofits advocating for families so that folks could support all of their work with a single click. Over 380,000 people gave their first contribution through ActBlue this quarter, and 51.3% of those folks gave that donation through one of these forms. 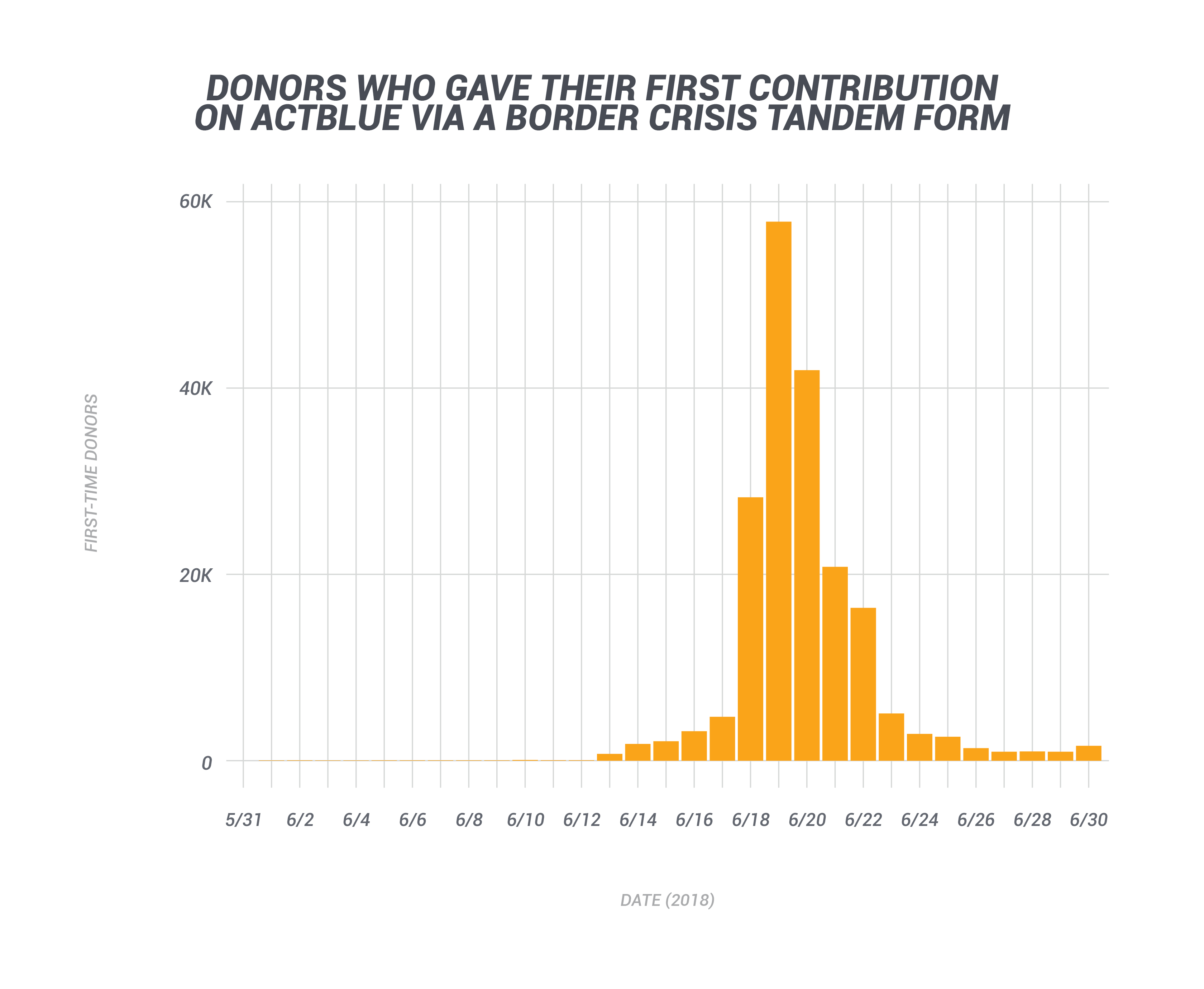 With ActBlue Express, donors can save their payment information and give to any campaign or organization using ActBlue with a single click. In Q2, 62.2% of all contributions came from ActBlue Express, and 280,319 folks created ActBlue Express accounts. We officially hit 5 million ActBlue Express users on June 30 during the end-of-quarter rush — only a year and a day after hitting 4 million users in 2017! 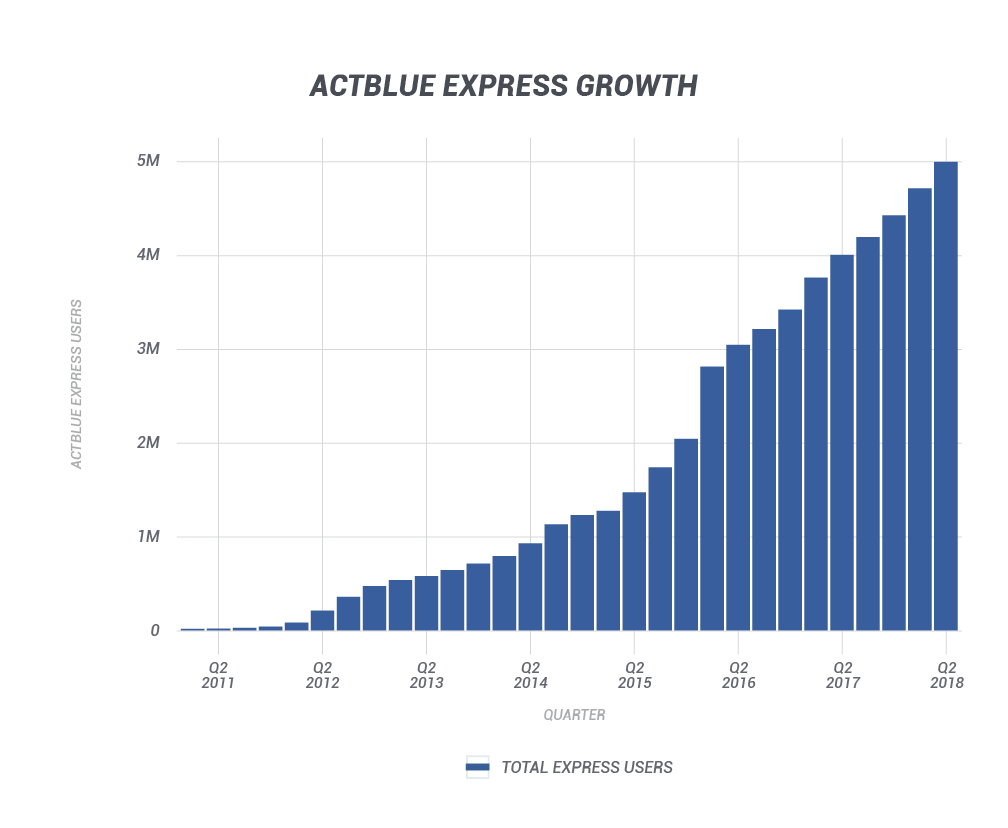 Recurring contributions sustain campaigns that have to make it from primary season to November and enable the nonprofits fighting for families at the border to support the affected children and parents for months to come. This quarter, recurring contributions made up 19.7% of total sitewide volume.

Q2 made it more clear than ever before that we are living in a new age of American activism that is being powered by small-dollar donors. From protesting to voting to donating, the left put in an incredible amount of organizing that will set us up for victory this fall. And with months still to go until Election Day, we know this movement will only continue to expand! If you want to fundraise for your favorite campaign or cause, or if you have questions about this post, get in touch with us at info@actblue.com!