August wrapped up an unparalleled summer, with the small-dollar donor movement breaking multiple fundraising records from beginning to end. Grassroots donors started the month off strong by hitting a huge milestone on August 2nd: $1 billion raised on ActBlue in the 2018 election cycle! By the end of the month, small-dollar donors gave over $117 million (compared to $40 million in August ‘16) and made over 2.6 million contributions to 7,567 candidates, organizations, and nonprofits. This astounding level of participation not only made August our first $100 million month, but also our biggest month ever in terms of dollar volume and number of contributions.

So just how big was this summer? Our three biggest months ever in terms of volume are now June, July, and August of 2018. This is especially astounding because summer tends to be a relatively slow time for fundraising, even in an election year, as you can see in the graph below. 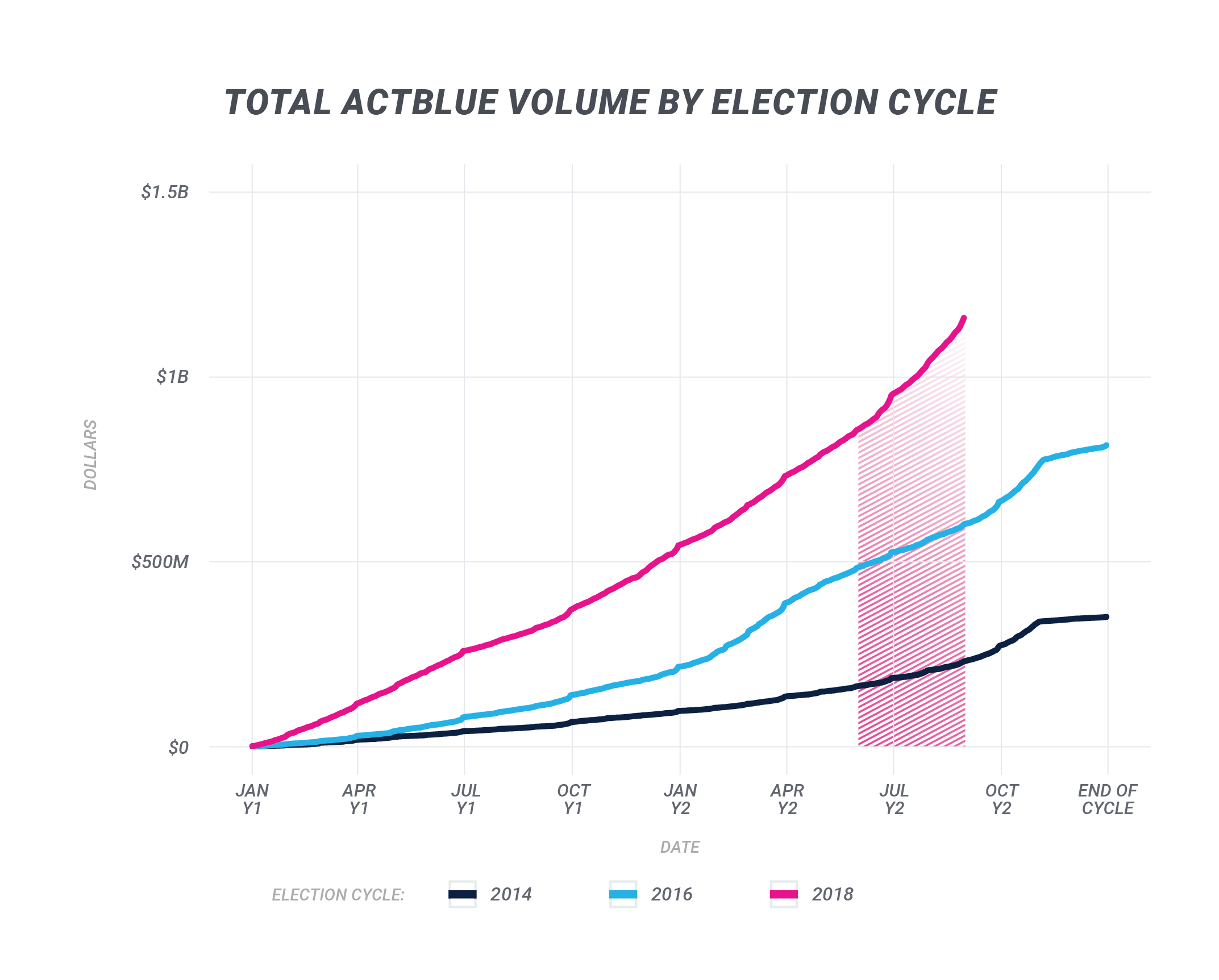 So far in the 2018 election cycle small-dollar donors have raised nearly double the amount they had raised at the same point in the 2016 cycle, with an average contribution size of just $35.  The huge totals from this election cycle so far are a testament to the collective energy coming from the left to get Democrats into office this November.

Check out all the highlights from August below.

The number of campaigns and organizations using our platform to raise money from small-dollar donors more than doubled from August 2016, reaching 7,567 groups this August! We’ve seen an outpouring of new candidates and organizations as people decide to change our country and run for office themselves.

August ‘18 also saw a big increase in the number of contributions when compared to August 2014 and 2016. Small-dollar donors are excited to be taking an active part in our democracy this year and are making more contributions than ever to a larger and more diverse set of campaigns and organizations. 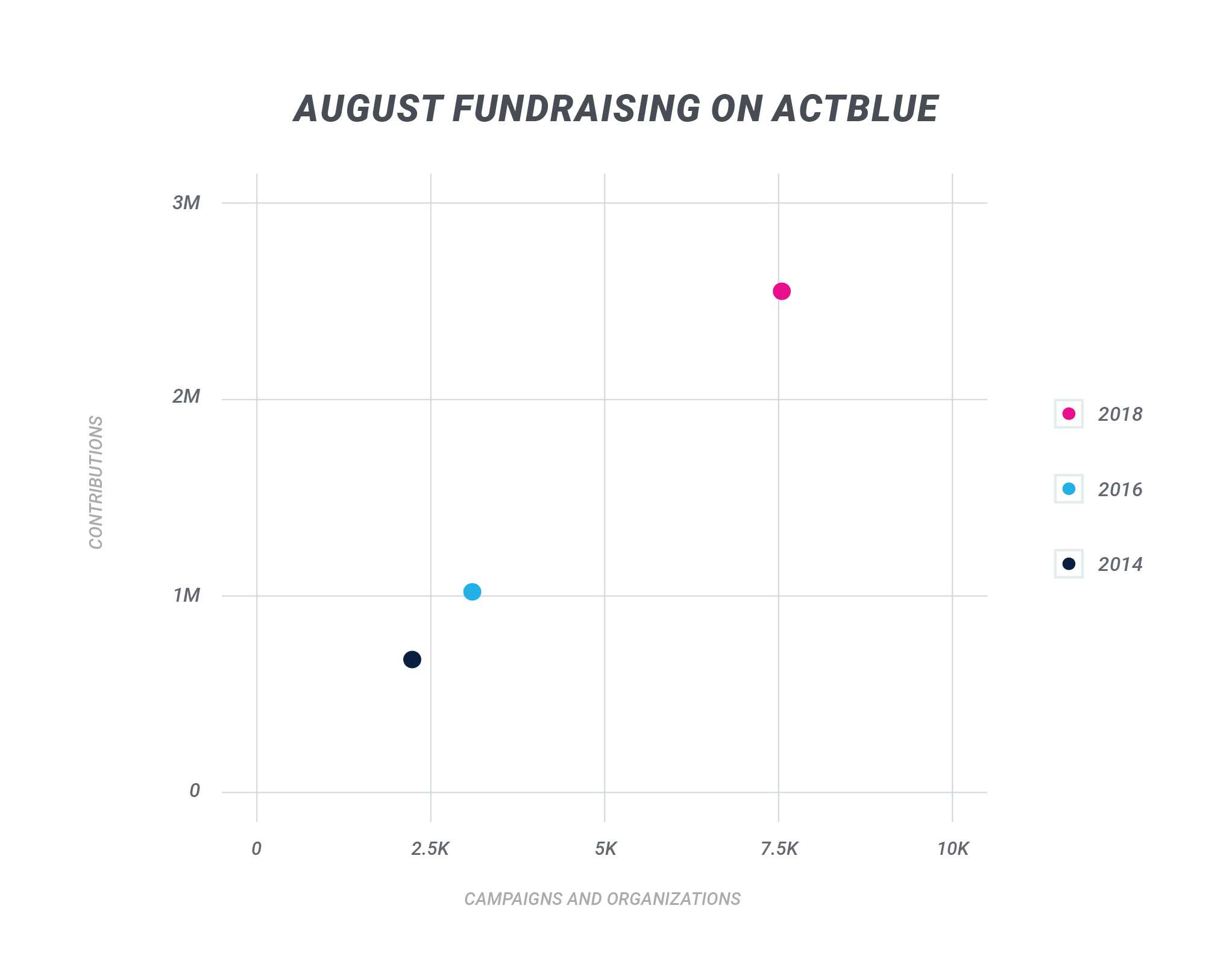 August was the biggest month in 2018 for new ActBlue Express users! The number of donors choosing to join ActBlue Express keeps growing, with an incredible 149,979 people signing up in August. These donors are able to save their payment information with us and give with a single click to any group using ActBlue. As small-dollar donors feel the urgency of the midterms and want to stand up to Republicans bankrolled by mega-donors, they are looking to make multiple donations to Democrats with fewer clicks.

Mobile contributions made up 45.8% of all contributions on ActBlue last month. Mobile giving continues to steadily make up almost half of all giving on our platform, especially as more rapid-fire news churns out leading up to the elections. That’s why we make sure our contribution forms are easy to give through on desktop and mobile interfaces so donors can participate wherever they are located.

Recurring donations totalled over $19.5 million this August, more than double the volume in August 2016. With the midterm elections just around the corner, grassroots donors are meeting the call to mobilize and backing candidates on the left with people-powered campaigns.

We’ve never seen a summer of giving like this past one. Small-dollar donors are building and growing a movement to turn Congress, state houses, and city councils blue this November. With primary elections quickly coming to an end and the anticipation of midterms reaching a high, grassroots donors aren’t showing any signs of stopping. If you want help fundraising for your favorite candidate or if you have questions about this post, get in touch with us at info@actblue.com. And if you’re looking to set up an ActBlue account for your group, contact support@actblue.com!