Small-dollar donors set a new standard for civic engagement in 2019 and built the foundation Democrats and progressive groups need to win in 2020. Together, the small-dollar donor community raised more than $1 BILLION for over 13,000 candidates and organizations fundraising on ActBlue, with an average contribution size of just $30.50! A milestone like $1 billion raised in one year takes massive people power — 6 million people gave on ActBlue to campaigns or causes that mattered to them (the most donors ever in a year!), and over 3 million of those people were first-time donors! That’s as many first-time donors as in 2017 and 2018 combined, and 40% of these first-time donors gave multiple times in 2019. 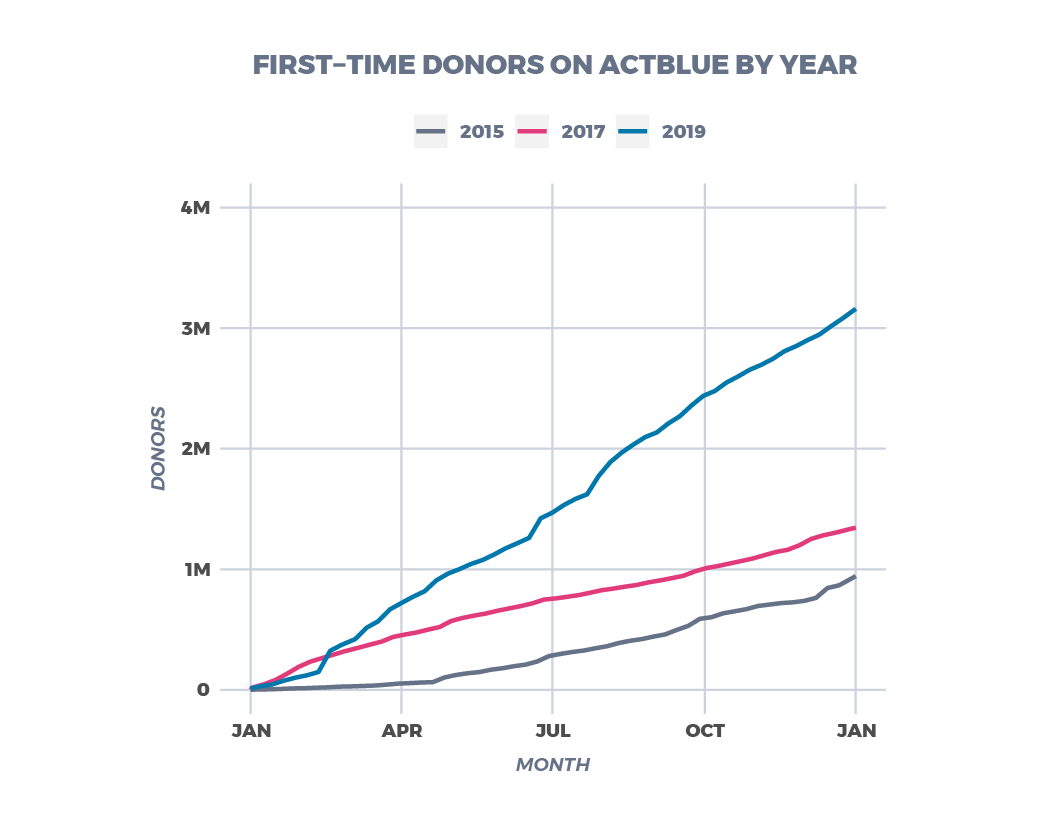 In total, grassroots donors made 35 million contributions on ActBlue in 2019, the most ever in one year and more than double the number they gave in 2017. And in a historic presidential primary year, folks did not ignore other crucial causes: Nearly 40% of all 2019 donors gave their first contribution of the year to one of the thousands of non-presidential candidates or groups raising money on ActBlue.

These numbers wouldn’t be possible without ActBlue Express, which allows donors who’ve saved their payment information to give with a single click. By the end of 2019, we reached a total of over 8 million ActBlue Express users. This is a powerful community of donors ready to take action at a moment’s notice, and 29% of these users signed up for their account in 2019, making this our largest year ever for ActBlue Express adoption!

2019 was also a breakout year for mobile contributions: 57% of all contributions on ActBlue were made on mobile devices. This was the first year ever that over half of all contributions came via mobile, which shows just how engaged folks were in 2019. More people took action than ever before and are now poised to change our country — from organizing their local communities to electing a new president — in 2020. Keep reading to see all that small-dollar donors accomplished in 2019! 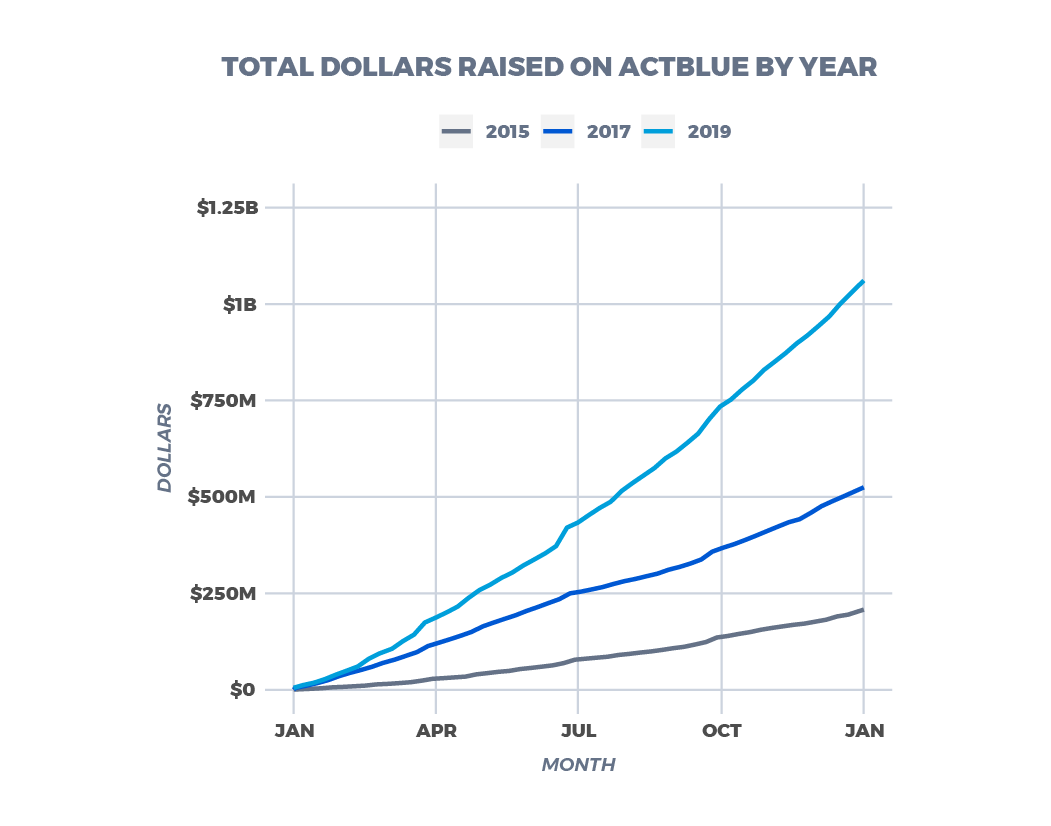 2019 also ended strong: Small-dollar donors gave 11.2 million contributions in Q4 for a total of $343 million. Over 3 million donors chipped in to more than 10,000 campaigns and organizations this past quarter, with an average gift of $30.53. And plenty of records were set in Q4:

The big numbers from this year just skim the surface of the impact small-dollar donors had in 2019. Not only did they support a slate of 2020 presidential candidates and nonprofit organizations across the country, small-dollar donors were also a driving force behind the impressive wins Democrats racked up in crucial down-ballot elections this fall. Grassroots donors raised $100 million for state and local candidates across the country on ActBlue in 2019: 36% more than 2017! And twice as many state and local candidates raised money on ActBlue in 2019 compared to 2017.

The state-level work is particularly important now, because we have a once-in-a-generation opportunity to organize around redistricting in a presidential election year, when voter turnout is highest! At ActBlue, we made strategic investments in organizing at the state level in 2019 by growing our team that works directly with state and local candidates and committees and partnering with organizations and training programs from coast to coast to make sure we were pairing our tools with the strategy Democrats need to build successful grassroots programs. In 2019, members of our team attended 187 events in 39 states and the District of Columbia, building relationships with candidates and organizations or providing in-person trainings.

Small-dollar donors also continued their activism beyond elections in 2019 by showing up for rapid response moments and raising their voices for issues that mattered to them. Outside of presidential fundraising and traditional fundraising deadlines (which typically see very high mobile rates), the day with the highest mobile contribution rate in 2019 was August 4, following the mass shootings in El Paso, Texas and Dayton, Ohio. On that day, 61.6% of contributions (excluding the presidential race) came through a mobile device.

The 2018 elections proved that small-dollar donors could fuel campaigns to victory, and in 2019, folks across the country were eager to be a part of this people-powered movement. 2019 was our second billion-dollar year in a row, with more people making more contributions than ever before.

Small-dollar support has become a key indicator of success for candidates up and down the ballot, and grassroots donors are ready to organize and fight for their candidates in 2020. We can’t wait to see what this movement accomplishes this year!