Staying Strong. In the second quarter of 2022, small-dollar donors were engaged and energized and took action, supporting candidates across the country and organizations doing critical work. About 2.8 million unique donors gave 11.8 million contributions to 16,059 campaigns and organizations, totaling nearly $513 million with an average contribution size of $43.31. Donors gave more than double the number of contributions and dollars this quarter compared to the same period during the last midterm election cycle.

This quarter, in particular, included consequential events that sparked an ongoing national dialogue and moved donors to act: the overturning of Roe v. Wade, the support for gun safety groups in the wake of nationwide mass shootings, as well as the primaries taking place around the country.

Our numbers showed an influx of first-time donors in May and June 2022, as people stepped up to act. For example, eight out of ten of the biggest days of the cycle for first-time donors occurred in the days following the Dobbs opinion, the Uvalde, TX shooting, and the Dobbs draft opinion leak.

Moved to Act. One important trend we’ve seen so far during the first two quarters of 2022: Donors are getting activated and involved in supporting state and local campaigns and nonprofits working on some of our nation’s most pressing issues. For example, fifty-five percent (55%) of first-time donors this cycle – through June 30, 2022 – gave their first contribution to a non-federal campaign, committee, or organization.

Take a Deeper Dive. Read on to learn more about ActBlue’s fundraising trends during the second quarter of 2022, and how small-dollar donors are meeting the moment through their support of candidates and causes nationwide. 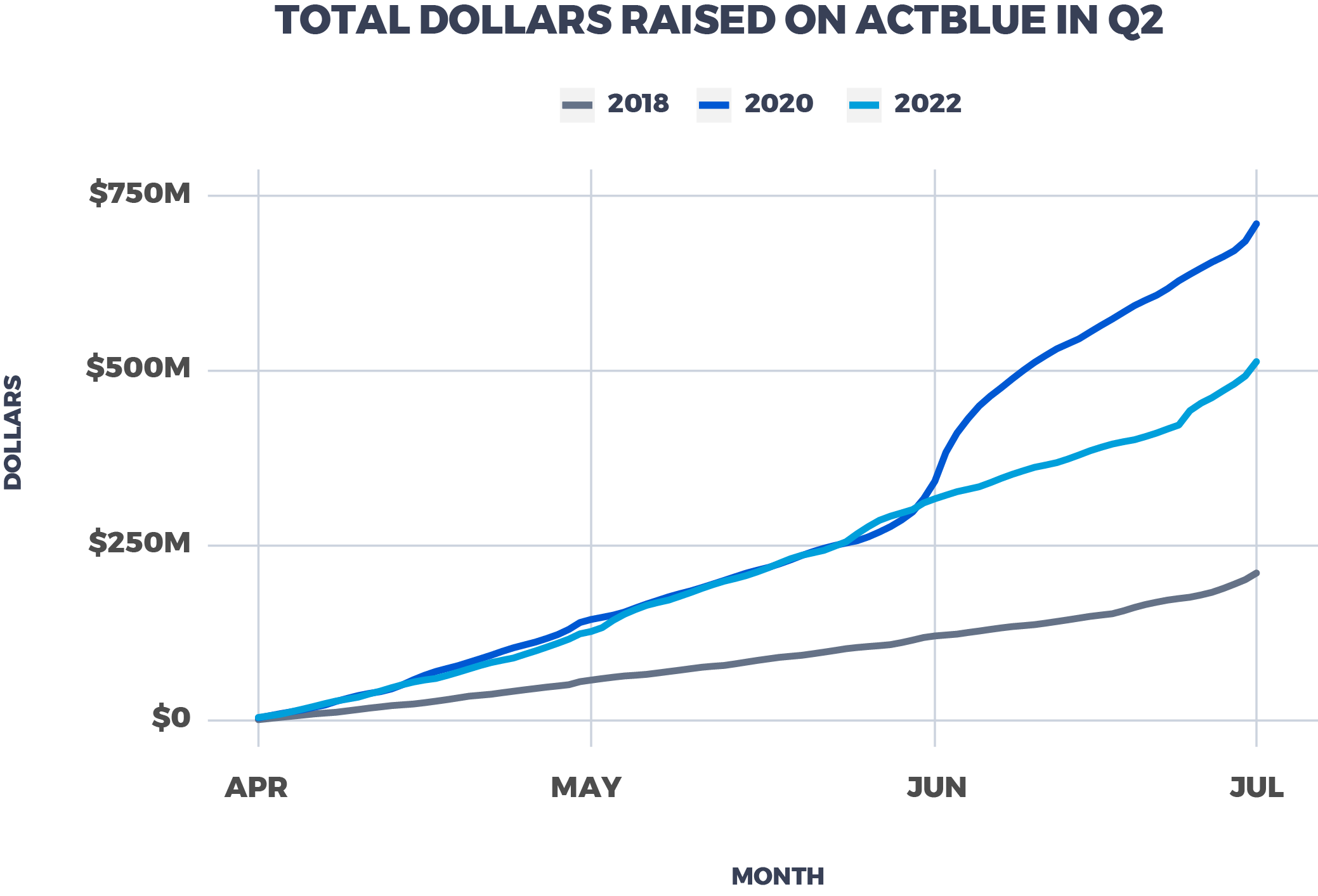 Compared to the last midterm election cycle in 2018 — a historic year for small-dollar donors helping to propel Democrats to victory in the House — House and Senate candidates raised twice as much money from double the number of contributions.

Acting locally, too. Small-dollar donors are giving to state-level races, driven by the alarming attacks on voting rights, reproductive freedom, LGBTQIA2S+ rights, and so many other issues lobbed from Republicans in states around the country.

Donors made double the contributions and more than doubled the dollars they gave to state legislative candidates this quarter, outpacing the same period in 2018. Donors also gave twice as much money to in-cycle candidates for Attorney General this quarter than in the same quarter in 2018.

Donors gave three times as much money to in-cycle gubernatorial races and nearly tripled the amount they gave to in-cycle state secretaries of state candidates compared to the last midterm cycle.

Unleashing grassroots fundraising power for nonprofits. This quarter demonstrated how small-dollar donors are taking action to support issues and causes. The number of unique donors giving to nonprofits doubled, and those donors gave more than three times as many dollars to unique organizations – with more than triple the dollars raised, and more than double the unique donors than in the same period in 2018.

ActBlue makes taking action easy to support candidates, causes — or both. With tools to build grassroots fundraising programs and teams in place to help organizers maximize those tools, ActBlue is the trusted source that people can rely on to drive change.