ActBlue announced today that Regina Wallace-Jones will serve as its next CEO and President. Wallace-Jones, a technology executive, former elected official, and Democratic organizer succeeds Erin Hill, who led the organization for 14 years. Hill announced in July her intention to step down at the end of 2022.

Since its founding in 2004, ActBlue has transformed political fundraising, helping Democratic campaigns and progressive organizations raise more than $11 billion and more than 21 million small-dollar donors make an impact on the causes they care about. Wallace-Jones will bring a unique mix of experiences from the tech sector, public service, and the organizing community to the role. She has had a dual-track career, both working as an engineer and executive for some of the biggest companies in the tech industry and also running for local office, serving as mayor of East Palo Alto, CA, and dedicating her time and energy to helping elect Democratic candidates.

“I am incredibly excited to be joining the team at ActBlue and to put my range of experiences to work to help drive progressive change, solve problems for our users, and make sure more people can easily and effectively engage in the political process,” Wallace-Jones said of her new role at ActBlue.

Regina’s powerful combination of skills and deep commitment to progressive change positions her to lead ActBlue and help envision its next decade. She is an accomplished product and security leader, having held executive positions at Lendstreet, Mindbody, eBay, Facebook, and Yahoo. Her background equips her to deliver solutions for ActBlue’s users while ensuring it remains a trusted and secure platform. This moment calls for innovation and creativity to ensure Democrats and progressives have a strategic advantage when it comes to fundraising. Wallace-Jones is well versed in successfully leading teams to accomplish those goals.

As CEO, Wallace-Jones also brings an understanding of the mechanics needed to successfully win a down-ballot race and what it takes to win a national election. While an engaged citizen throughout her life, she became more involved in public service after serving as a Regional Field Organizer during President Barack Obama’s 2012 campaign while balancing her career at Yahoo and caring for her young daughters. After organizing for multiple campaigns, she ran for and was elected to the East Palo Alto City Council. In 2020, the council appointed her as mayor of East Palo Alto, CA, where she guided the city through the pandemic. She is also a proud member of Delta Sigma Theta, Inc., a public service sorority.

Wallace-Jones joins a short but exceptional list of leaders at ActBlue. She will be the fourth leader in the organization’s 19-year history and break ground as the first Black woman to helm the nonprofit.

“Regina is uniquely suited to help build upon ActBlue’s transformational work and ensure our platform provides Democrats with a strategic advantage. In her 20 years in tech, she’s built platforms that scale, and she understands how to make sure systems evolve, so they’re always secure and reliable,” said ActBlue founder and Board Chair Matt DeBergalis. “I am thrilled to welcome Regina to the team.” 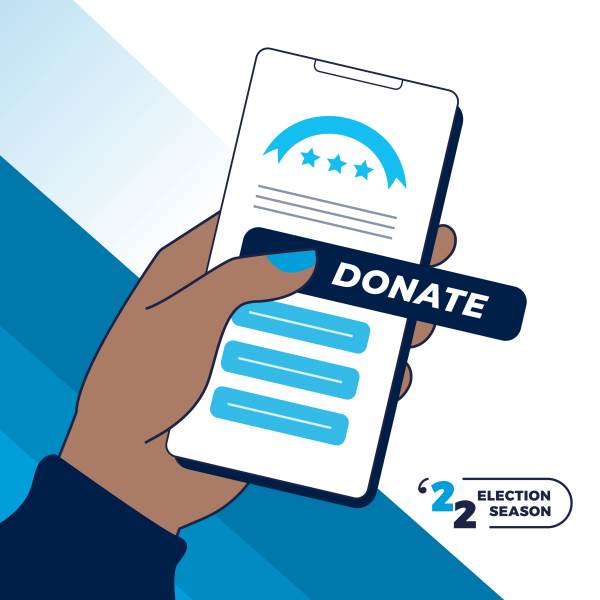 The tools you need for the work ahead