Express Lane links for everyone 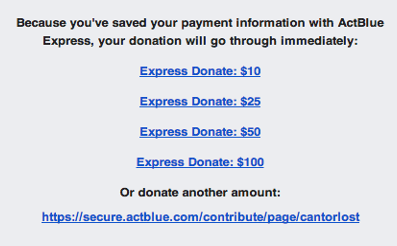 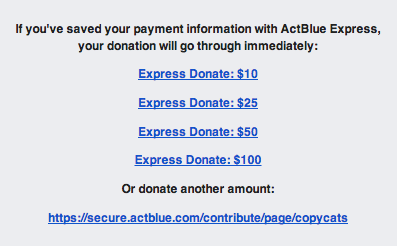 Why? Well, it turns out that you can raise slightly more money by sending an Express Lane-structured email to your entire membership. Traditionally, list admins send two distinct emails; Express users see Express Lane links, while everyone else gets an email with “regular” links. With Express Lane to all, you can send the same Express Lane email to all of your users, saving you time and opening up the possibilities for groups with smaller lists.

There’s been a lot of testing done both by us and other committees on sending Express Lane emails to everyone. The general consensus is that Express Lane structure to non-Express users does perform slightly better than normal links. We’ve tested sending Express Lane links to non-Express users 4 different times. Consistently, we see more money (the net bump is around 6-7%), but these results aren’t statistically significant. Others are seeing similar gains.

While we’d love to see statistical significance, we think it’s still a great idea because there is a tremendous upside potential for both groups and campaigns that are already using Express Lane and those who have yet to try it out. It’s a time saver for smaller groups and also encourages your members to save their information with ActBlue and become an Express user.

Our recommendation is that groups and campaigns test this with their membership and confirm that they are getting similar results before making this a best practice. There is some reason to believe that we’re seeing a novelty effect, since the new link structure is unusual. We’ll test this again in the future to make sure that the results are still holding, and we urge others do the same.

This tactic works particularly well for groups with smaller lists. We’re confident enough in the testing to tell you that you’re likely to raise more money from sending Express Lane to your entire list, especially with the strong growth in the Express universe (994k users and counting!). However, pay attention to future posts, in case we do find that there is a novelty effect.