We’re fewer than six weeks from the election. That means, among other things, that optimal fundraising strategies become even more important than usual. Here at ActBlue, we’ve been running tests on a nearly daily basis on all kinds of Express Lane strategies.

Typically, we see the largest (statistically significant) improvements when optimizing factors related to the Express Lane askblock structure like amounts, number of links, and intervals between the links. For our own list, we find that, statistically speaking, the flashier aspects you see in some fundraising emails — emojis in subject lines, e.g. — do not do much (if anything) to improve donation outcomes. Here’s a tactic we recently tested, though, that’s a bit more on the fun side of things and definitely brought in a lot more money.

A little while ago, we started using our weekly recurring feature to great success. (By the way, if you haven’t tried this feature yet, shoot us an email at info [at] actblue [dot] com and we’ll turn it on for you.) After testing which amounts brought in the most money, we landed on this1: 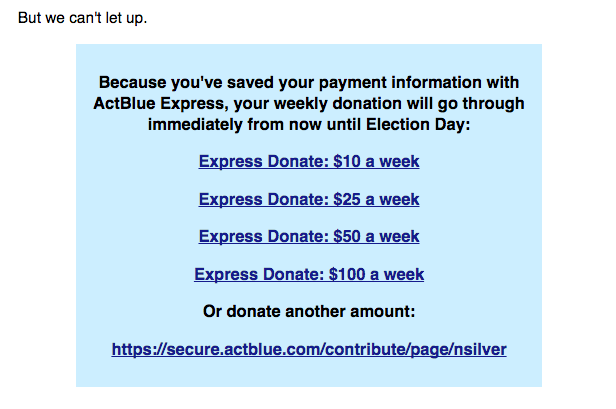 We wanted to see if we could raise more money by asking for “$7 because there are 7 weeks until the election!” Gimmicky? Sure, but we had a hunch that it would perform well.2 Here’s what it looked like: 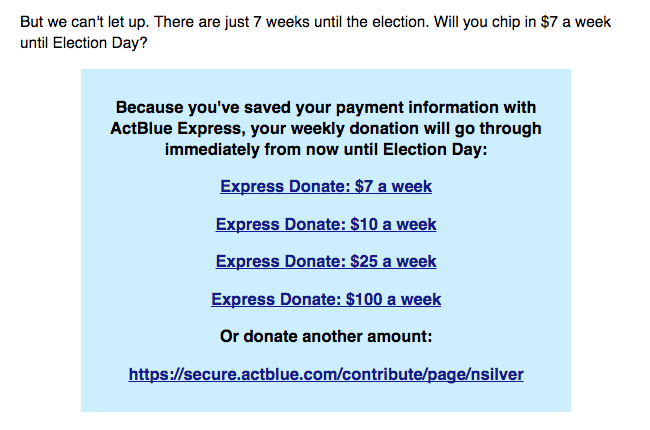 So what happened? The segment with the ‘7 for 7’ ask performed much better than the control; it brought in 87.6% more money, a statistically and practically significant improvement.3 Cool!

What’ll be interesting to me is to see when this tactic will lose its optimality. The key factor is that $7 (with gimmick) performed better than $10 (the control and previously optimal ask amount) despite it being a lower dollar amount. Though, at some point, a too-low number-of-weeks-to-election-dollar-ask-amount combination will negate the positive c.p. effect of the gimmick. Based on other testing we’ve done, my guess is that that will be at 4-weeks-$4. We’re doing follow-up testing on this “n weeks until the election!” tactic, so we’ll see!

If you decide to test something similar, send me an email and we can chat! Emails to info [at] actblue [dot] com with my name in the subject line will be directed to me.

P.S. Doing a lot of testing in the election run-up? Want a tool to help you manage your test groups? I wrote something in R for you! I’ll post something on the blog about it soon, but if you want it in the meantime, shoot me a note (emails to info [at] actblue [dot] com with my name in the subject line will be directed to me).

1 Actually, we built a model that predicts how a given Express user will respond to different types of donation requests based on previous donation information. Using those predicted values, we decide what type of donation ask they receive (of one-time, weekly recurring, monthly recurring) and for how much money they are asked. Math! The point: this is what we landed on for a certain subset of our list.

2 Of course, all else equal, it’s tough to distinguish whether any difference was due to the gimmick or because $7 is lower than $10. The theory would be that with a lower amount, more people would give, and even though the mean donation amount would likely be lower, the increase in number of donors would outweigh the decrease in mean donation size. This is definitely possible, but so is the opposite; it’s all about finding the optimal point.

In fact, we included a segment in the test which received an askblock starting with a lower amount and saw this dynamic in action, though the overall treatment effect was not statistically significantly different from the control. This lends support for interpreting the effect from the gimmick segment as the gimmick per se, but a detailed discussion is excluded from the body of the post for the sake of brevity. More rigorous follow-up testing on this “n weeks until the election!” tactic is already in the field— shoot us an email to chat!

3Pr(>|t|) < .01, controlling for other significant factors, including previous donation history. 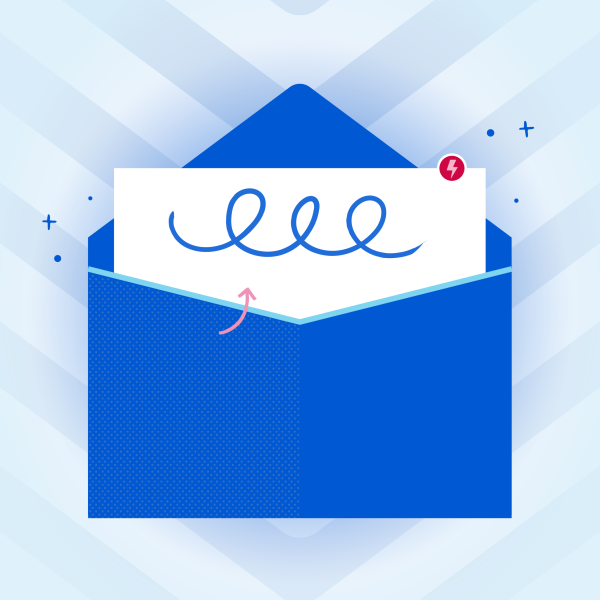