Campaign season is picking up quickly as we march on toward 2016, and we’re always working to make things as easy and efficient as possible for our users.

That’s why we’ve made some big changes to the way contribution forms are managed — and now it’s better than ever. We’ve made it so you can access your campaign or organization’s forms (with or without money raised) all in one convenient place. Plus, we’ve got a bunch of other new features to make managing your forms easier than it’s ever been.

Just head over to the By Form tab from the left menu on your campaign or organization’s dashboard. 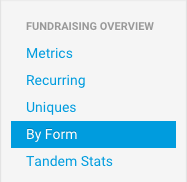 Once there, you’ll see a detailed breakdown of all your contribution forms.

They’re listed in descending order by default, starting with the most recent form that was created. But just click on any of the headers and you can toggle the table to sort it how you’d like.

With this update you’ll be able to simply glance at the table and get a clear picture. You can quickly scan through the slugs (or page names) you gave your forms, the number of contributions they received, the amount of money they raised, and whether or not you chose to brand your forms. You’ll also be able to duplicate a form from this page, with just the click of a button.

Further, if you’ve got a form from a few years back that you know won’t be getting sent out to donors, simply hit the Archive button in orange at the right of the table.

If you choose to archive a form it can no longer be viewed, which also means it can no longer receive contributions and you won’t be able to edit it. However, we give you the option to archive rather than delete your forms, so that you can Revive a form if you need to. If you’ve archived a form it will turn grey, as you see below, but it will still be listed in the same spot in the Dashboard as it was before it was archived.

Just click Revive at the far right of the table and the form will become active. Anyone with access to the Dashboard will have the ability to visit and work with the form again.

You’ll also notice that there are two tabs at the top of the page, one for Managed Forms and one for Community Forms.

The Managed Forms tab provides a breakdown of forms that were created by any user with access to your campaign or organization’s Dashboard.

The Community Forms tab provides a breakdown of forms that were created by a third party. For example, a volunteer decided to create a form to raise money for your candidate or organization. You won’t have the ability to edit these forms, but you can collect data, just like you would from a form created by yourself or another user with access to the Dashboard.

Just below those tabs you’ll also have the option to Download a contribution form CSV report. This report will give you an even more detailed breakdown of each form, including info like whether or not the form was set to public or private, as well as the pre-set contribution amounts you chose for the form.

Finally, you can now search for a form by page name. Simply type in the name you gave your form in the box at the upper righthand corner of the table.

If you have any questions or comments about this update, please don’t hesitate to reach out at info@actblue.com.