Google Pay for Android is here!

We’re always focused on making it as easy as possible for small-dollar donors to give, so we’re excited to announce that Android users can now donate to political candidates and groups on ActBlue with Google PayTM!

Millions of Americans use Google Pay in their daily lives for shopping, and now they can use it to chip in to their favorite candidates. When an Android user with Google Pay set up on their device lands on an ActBlue contribution form for a political campaign or committee, they’ll be able to give faster by selecting the Google Pay button: 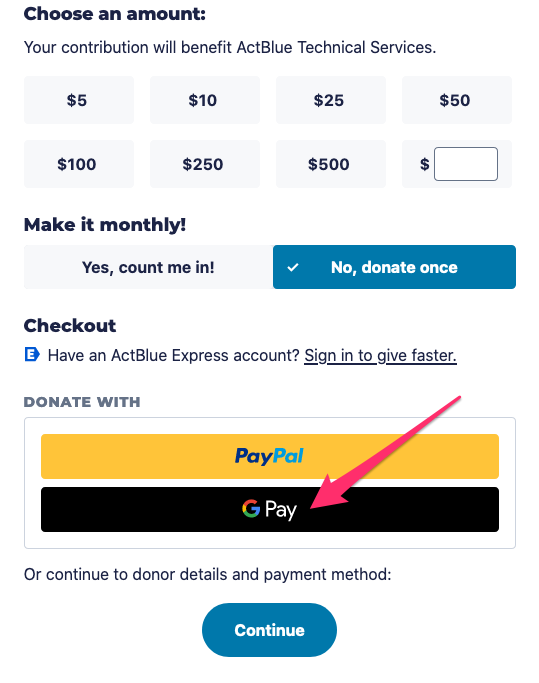 Google Pay joins PayPal™ and Apple Pay® to round out our digital wallet payment methods. The vast majority of Americans use either Apple or Android mobile devices, so the addition of Google Pay means almost any grassroots supporter giving on the go will have a digital wallet option when donating to political groups on ActBlue! 56.9% of all contributions made on ActBlue in Q3 2020 were made via a mobile device, so prioritizing easy mobile giving with tools like Google Pay is crucial for building a strong small-dollar donor program.

This is only the beginning of our Google Pay rollout: Right now, Google Pay is available on ActBlue contribution forms for political campaigns and groups that are accessed on an Android device, but we look forward to offering it for 501(c)(4) and 501(c)(3) nonprofit contribution forms, as well as more devices and browsers, in the future!

The small-dollar donor movement is about democratizing power through mass participation and grassroots support. With this new feature, we’re proud to make online giving more accessible for millions of Americans. Learn more about using Google Pay on our support site!

Google Pay is a trademark of Google LLC.
© 2009 PayPal, Inc. All rights reserved. PayPal and the PayPal logo are trademarks of PayPal, Inc. Other names, trademarks and brands are the property of their respective owners.