Small-dollar donors across the country are motivated, engaged, and focused on investing in long-term change this year as they write the next chapter for Democrats and progressive causes after an unprecedented 2020 cycle. Grassroots donors made Q1 2021 ActBlue’s biggest first quarter of any election cycle by dollars raised, contributions, unique donors, and number of groups fundraising. 2.6 million donors gave $314 million to 10,603 campaigns and organizations — that is almost half the number of groups that raised on ActBlue in the entire 2020 election cycle!

Of those groups, 18.8% were new to ActBlue this quarter. Additionally, 87.7% of Q1 donors gave during the 2020 cycle. That is a massive number of people who are staying involved and coming back to give in a new cycle. More than four years after the resistance movement’s push back against cruel and destructive Republican policies started putting more Democrats in office, the momentum of advocacy and organizing on the left only continues to grow.

In particular, movement-building work continues to be strong after a year of historic organizing around racial justice and the pandemic in 2020. At ActBlue, we’ve invested in growing our Movements, Issues, and Charitable Organizations team to ensure we have the capacity to help groups fighting for racial and social justice, the environment, and other causes build powerful small-dollar fundraising programs to fuel their work. 2,568 nonprofits raised money on ActBlue in Q1, a 146.2% increase compared to Q1 2019. Small-dollar donors gave 3.8 times the number of contributions to nonprofits this quarter compared to Q1 ’19, which translated to more than five times the dollars raised in Q1 ‘19. 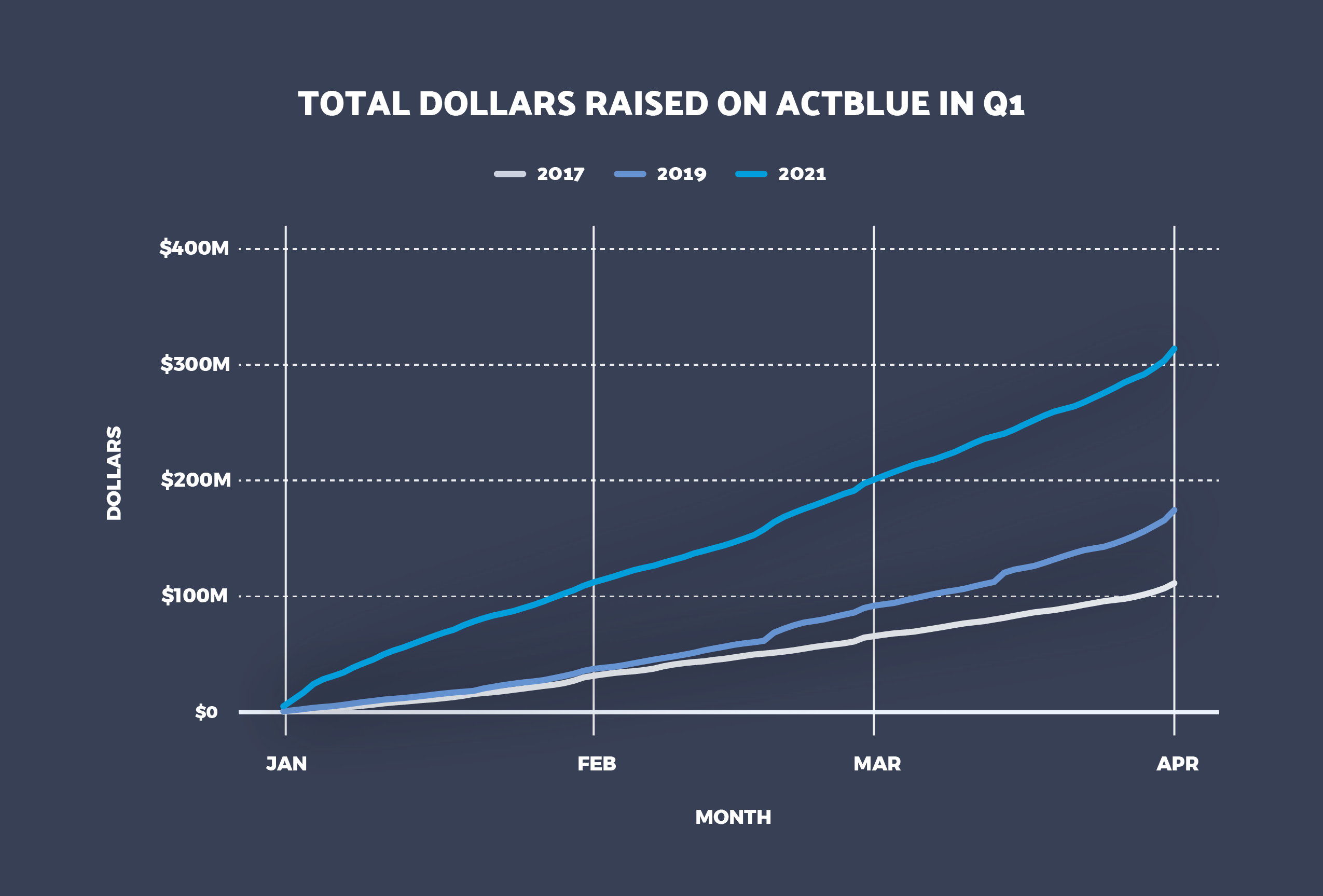 At the federal level, small-dollar donors helped Reverend Raphael Warnock and Jon Ossoff win the Georgia Senate runoffs at the beginning of January, giving the Democrats a government trifecta. Donors also sprang into action in response to crises like the devastating winter storms in Texas, an increase in violent hate crimes against Asian Americans, and attacks on voting rights in Georgia.

We work hard to make giving from anywhere as easy as possible so that donors can take action during rapid response or while they’re on the go. That’s why we offer ActBlue Express, which allows donors to save their payment information and give with a single click, as well as digital wallet options like Apple Pay®, Google Pay™, and PayPal™. We want to make sure that as many people as possible can give with a saved payment option.

The Democratic wins of 2020 that were fueled by small-dollar donors were felt immediately this quarter. From real COVID-19 vaccination progress to a $1.9 trillion stimulus package to a historically diverse presidential cabinet, small-dollar donors have helped make history. And donors who got engaged for the first time during the 2020 cycle are staying engaged — 39.9% of Q1 donors had given for the first time in the 2020 cycle.

The events of this quarter also put a spotlight on white supremacy, gun violence, discrimination against transgender youth and adults, and other urgent issues that small-dollar donors are passionate about. ActBlue is here to support the donors and groups taking on these critical issues in the cycle ahead.

Google Pay is a trademark of Google LLC.
© 2009 PayPal, Inc. All rights reserved. PayPal and the PayPal logo are trademarks of PayPal, Inc. Other names, trademarks and brands are the property of their respective owners.