Donors were energized and taking action in Q2: More than 2 million grassroots donors gave 8.4 million contributions totalling $289 million to 11,614 groups on ActBlue in Q2, raising more money than in Q2 2019, when the presidential primary was firmly underway. People also gave more contributions than in Q2 2019, and there were vastly more donors giving than in Q2 2017, when people were fired up about taking back Congress after Trump’s election. Altogether, these numbers show broad, continued engagement from donors this cycle.

Donors gave an average of 4.1 contributions on ActBlue in Q2, and 50.9% of donors gave to multiple candidates or organizations. And the reach of small-dollar giving goes beyond House and Senate candidates, with donors also giving to movement-building organizations and candidates at the state and local level, where some of the most consequential policies are being debated and passed — donors gave to nearly three times as many candidates and organizations in Q2 2021 compared to Q2 2017. Donors who were newly engaged during the 2020 election cycle are driving a significant amount of this momentum: More than one-third of Q2 donors gave for the first time during the 2020 cycle.

The energy and participation in Q2 followed an already historic Q1, which means this continues to be the biggest start to an election cycle in ActBlue’s history. This deep engagement shows sustained enthusiasm for investing in Democrats ahead of the 2022 midterms, even without Trump at the top of the ticket, and in continuing to fuel movements for racial, social, economic, and environmental justice. 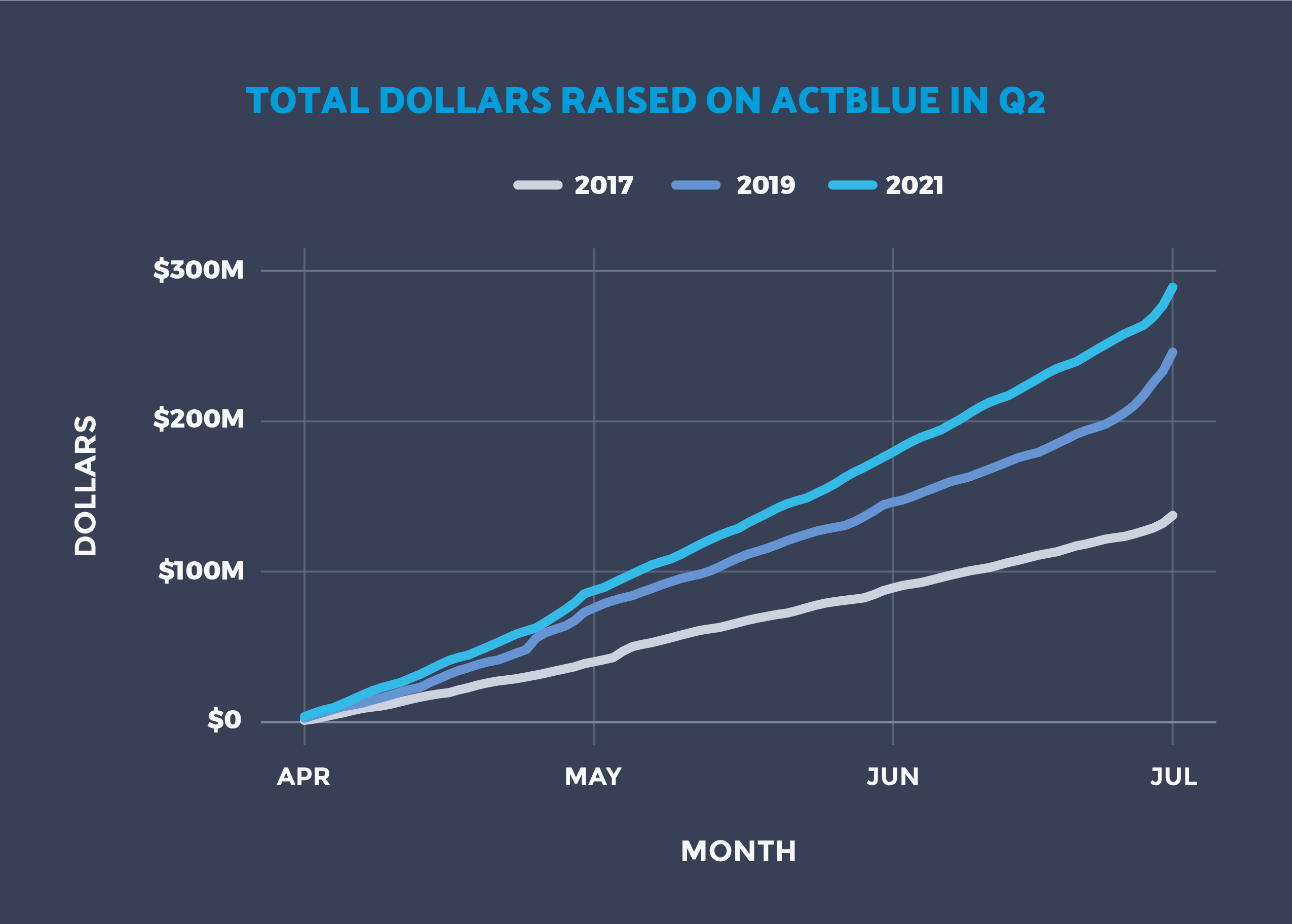 Outside of electoral politics, the momentum behind movement-building work continues after a year of historic organizing around racial justice and the pandemic in 2020:

Right now, Republicans at the state level are pushing some of the most harmful legislation in the nation — designed to disenfranchise Black voters, criminalize reproductive rights, deny LGBTQIA2S+ rights, and more — so people across the country are doubling down on supporting candidates and organizing in state elections. At ActBlue, we’ve put significant focus on growing our state-level work over the past several years so these candidates can build the digital fundraising programs they need to compete with their often well-funded Republican challengers.

Grassroots donors are showing their commitment to creating change — they are returning to give, donating to more groups, and creating a stronger playing field for Democrats up and down the ballot, as well as for progressive organizations.

People power is fueling organizing work on the left for 2022, and we’re always working to ensure donors can easily give from anywhere, at any time, to keep the momentum going. Small-dollar donors continue to chip in on the go using phones, ActBlue Express accounts, Google Pay™, Apple Pay®, and PayPal™ with ActBlue.

With crucial state and local elections coming up this fall, ongoing organizing by advocacy groups and nonprofits, and the buildup to the midterm elections, the small-dollar donor movement will be busy in the second half of this year. We look forward to continuing to support movement leaders and activists with the best online fundraising tools and strategies. Keep up with all of the action by following @actblue on Twitter and @actblueorg on Instagram!

Google Pay is a trademark of Google LLC.